The circumstantial evidence is overwhelming. 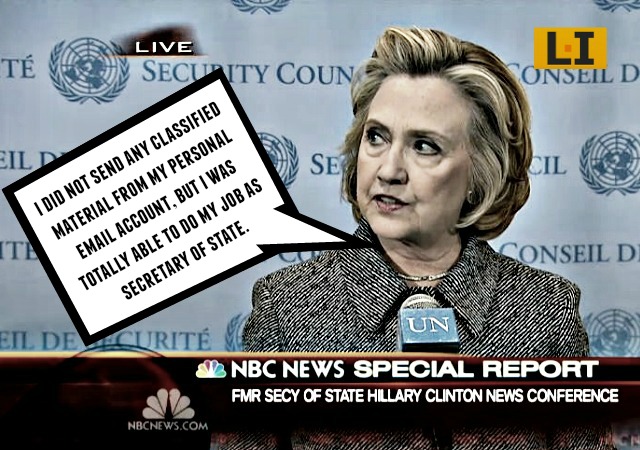 Earlier this week, the press savaged the former Secretary of State at a press conference where she attempted to explain the logistics governing her private e-mail server. Then, a report released by the Office of the Inspector General (OIG) revealed that one of Clinton’s key claims—that all of her e-mails were somehow captured by the State Department—is completely baseless.

Now, advocacy organization Judicial Watch has laid into the feeble argument that Hillary never used her private e-mail account to deal with classified information. They focus on a previous JW investigation showing that top State Department officials circulated sensitive and classified e-mails amongst themselves during and in the aftermath of the attack on the U.S. Embassy in Benghazi.

It’s hard to believe that the Secretary of State was completely out of the loop on this material, which was disseminated among her top aides as Islamic terrorists attacked the U.S. Special Mission in Benghazi, Libya. Ambassador Christopher Stevens, the first diplomat to be killed overseas in decades, and three other Americans were murdered in the violent ambush.

…
That brings us to the secret email account scandal initially exposed by a mainstream newspaper. “Hillary Clinton’s suggestion that she didn’t send classified information is belied by productions in our Benghazi lawsuits,” said Judicial Watch President Tom Fitton. “A review of the documents shows material sent to Susan Rice and other top State Department officials was withheld under exemptions for classified material. None of these emails (or any similar emails) were ever received or sent by Hillary Clinton?”

The scenario is highly unlikely, despite claims made by Clinton this week during her United Nations news conference. “I did not email any classified material to anyone on my email,” the former Secretary of State assured. “I’m certainly well aware of the classification requirements and did not send classified material.” So, we’re supposed to believe that the nation’s top foreign diplomat managed to exclude classified information in more than 30,000 emails?

Just one thing—a statement made by a former State Department official demolished the idea that you could guarantee that the account did not contain classified information:

And relations with other countries are particularly subject to secrecy claims. “Foreign government information” — information received from another government with the expectation that it will be held in confidence — is an official category of classified information in secrecy regulations.

A former senior State Department official who served before the Obama administration said that although it was hard to be certain, it seemed unlikely that classified information could be kept out of the more than 30,000 emails that Mrs. Clinton’s staff identified as involving government business.

“I would assume that more than 50 percent of what the secretary of state dealt with was classified,” said the former official, who would speak only on the condition of anonymity because he did not want to seem ungracious to Mrs. Clinton. “Was every single email of the secretary of state completely unclassified? Maybe, but it’s hard to imagine.”

Then there’s this careful observation:

Hillary did not "send" classified info — but did she receive any? Very careful wording http://t.co/B7F2BVSoDA pic.twitter.com/A8Xpj1TsFM

On Bloomberg’s “With All Due Respect,” Reince Priebus made a really good point about speculating about the e-mails, the servers, and how Hillary is maneuvering through the media blitz. Watch (at about the 10:00 mark):

He’s right. Normally, I shun speculation and “connecting the dots” when most of those dots are either classified, or simply unavailable—I want the dots, not the outline of a dot that may tend to be; but this is an entirely different level of dot connecting. Who was policing this? What was the standard for making sure classified information stayed secure? What was personal, and what wasn’t? If she fielded 30,000 e-mails, or even half that many, how could she possibly be sure that nothing was compromised? Even if she wasn’t the one sending it out? I field just over 100 e-mails a day and if I was asked to confirm that XYZ wasn’t present in my inbox, I’d have to pause and check.

This thing is snowballing. Everyone out there donning a tinfoil hat is officially vindicated.

Let’s not forget how Hillary’s E-mail account came to light. The law finally caught up with Guccifer (a hacker) and the agent found that he had hacked Blumenthal’s (I think that was his name) E-mail account, and a number of Hillary’s E-mails were on Guccifer’s computer, and the agents strongly hinted that many of the E-mails were classified. On top of that, Hillary didn’t start encrypting her E-mails until she was at least two months in office, because that is when she bought the SSL certificate. There are records of such things.

Someone should look at the classified emails recieved by her subordinates. They generally have a list of the people who received them and HRC’ should be among them.

“I was so incompetent and un0secure in my email, nobody shared anything Classified with me. I was the last to know”

As much fun as this, it’ll be even more fun when it’s ‘Barack Hussein Obama’s (or whoever he really is) turn taking a long, protracted truth enema like the one this corrupt, incompetent hack is receiving.

I want to know – which of her deputies or assistants had access to her account? Which of her deputies, assistants, and other, assorted hangers-on used this server and an associated e-mail account, had access to classified information themselves? The Clinton e-mail server could have been used by people in the former category to forward (to anyone, anywhere) classified communications that either were sent to, or sent by, Hillary. Those in either category could have used their accounts with the Clinton server to pass classified information (to which they had direct access) to anyone, anywhere.

Without the supervision of an IT department and the security apparatus associated with the government/State Dept. e-mail servers, any number of national security leaks could find outlets through a private server, and nobody would be the wiser. Even if this didn’t happen, anyone so cavalier about national security disqualifies herself from any position of trust in government.

NOBODY should be using a .gov email account for classified information. The government has standalone networks for classified communication which can only be accessed from a secure terminal, with a separate account. They cannot send to or receive from accounts outside that secure environment.

That’s not to say Hillary didn’t send classified through her personal account, but rather that having a .gov account does not authorize one to send classified information. Hillary simply would not be able to communicate with anyone on the secure network.

That brings up 2 possible scenarios:

1. She did NOT transmit classified to her staff’s official accounts, because the secure network cannot be accessed from the outside. Or

2. She and her staff were transmitting classified over unsecured connections (including .gov accounts) without regard to the most basic security practices.

Option 1 – That is what she has stated. If that is contradicted, you have a story. Otherwise, you don’t – no matter how hard you try.

Instead of showing your ass and your ideological blinders, you should read and learn.

There is a story here, no matter how hard you lie.

which she refuses to do …

Good points all, except I sincerely doubt those 30,000 emails are still on her server or anywhere else!

If she was out of the loop to that degree, in itself that would be proof of horrific dereliction of duty. She never received the 3am email from Ambassador Stevens to take the prompt action expected of one of her status.

recalling the ’08 campaign ad about just who is qualified to take that all important 3 am phone call.

I hope a foreign newspaper like the Guardian asks THEIR Sec State if they’d ever emailed Secretary Clinton… an email which would, by definition, be Classified:

““Foreign government information” — information received from another government with the expectation that it will be held in confidence — is an official category of classified information in secrecy regulations.”

Certainly they could fine ONE diplomat with the desire to repay Ms. Clinton for all the fine work she did.

This laser like focus on the classified info meme is a clever dodge by Clinton.

Writing as someone who has worked in the intel biz for over 30 years, even if Hillary didn’t send one bit of classified info, if I were part of a hostile govt’s intel apparatus, I would be salivating at the thought of having unencumbered access to the email of the Secy of State.

I firmly believe that, when Hillary feels comfortable that she can let it all hang out, she lets it ALL hang out. Reading those emails would be intel GOLD, classified or not.

We live in the age of lies.

Elected Democrats gave Obama a standing ovation when he said at the State of the Union address a couple of years ago that he was going to govern with his pen and his phone. That was Obama’s way of giving the American people and the Constitution his middle finger and saying, “go ahead, try and stop me”.

Hillary setting up her secret server is that exact same attitude, even though it happened at the beginning of Obama’s administration. She knew she was doing it to skirt the rules. She did it with Obama’s (perhaps tacit) consent. She knew no one in the government could – or would – stop her or hold her legally liable. She calculated it would all eventually blow over. The rules the government creates for itself just don’t matter to Democrats.

Part of Obama’s “fundamental transformation” involved changing public attitudes about constitutional limits and adherence to law. Obama has gone a long way in pushing beyond the limits of the Constitution, knowing full well Congress will not stop him and the court battles will be long and drawn out affairs. The country is already unrecognizable from what it was before he was elected. I can only imagine how much further Hillary will take things if she gets elected.

May as well order a tiara and scepter for her if she wins next year.

By doing what he’s done and is doing, Barracula has pushed a lot of people off their dimes and into a full-blown revolution in their thinking and attitudes toward law and the foundation of all our laws…the Constitution.

I’ve predicted…and repeat it here…that we will see a swing of the national weal BACK toward a demand for law and order in the U.S., and it will cut across all demographics.

No one knows how tech savvy she is. If the sever hasn’t been scrapped it is likely that all the email is still there. Some people, but not all, know that simply hitting the delete button does not erase the file. What it does is eliminate the pointers. Unless the actual location of the file is written over, it still exists and any competent tech can retrieve it.

Can someone with legal training please let me know which statutes would apply to Mrs. Clinton’s actions?

I’d also look up anything that Andy McCarthy has written on the matter.