“My late father … was a broken man for all the remaining years of his life. My mother … suffered torment and agony for 40 years” 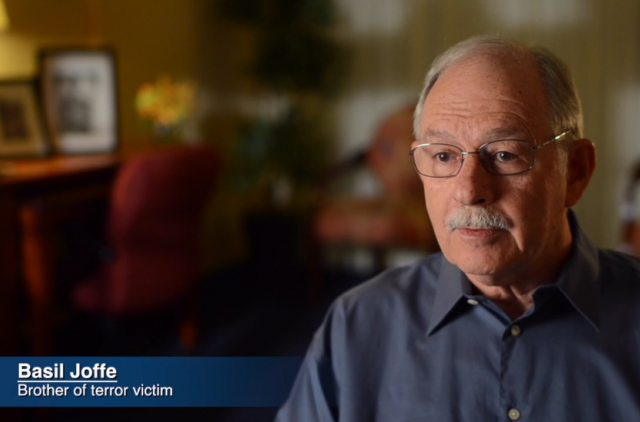 Basil Joffe is the brother of Edward Joffe, who was killed in the 1969 Super Sol supermarket bombing in Jerusalem for which Rasmea Odeh was convicted. The evidence of Rasmea’s guilt is overwhelming.

When she immigrated to the U.S., Rasmea concealed her conviction in Israel and her 10-year incarceration (her life sentence was commuted in 1979 in a prisoner swap for an Israeli soldier captured in Lebanon.) Rasmea was convicted in November 2014 in federal court in Detroit of unlawfully procuring naturalization. She faces sentencing on March 12, 2015.

Basil and his daughter, Terry Benaryeh, attended the trial. Terry wrote a guest column at Legal Insurrection, Rasmea Odeh is no hero:

It is with much sadness, disappointment, and frustration that I write to you today.

I spent last week attending the Immigration Fraud Trial in Detroit of Rasmieh Odeh. I sat in that courtroom with my father (alone in our row) surrounded by supporters of Odeh. We endured days of hateful looks and the rehashing of a traumatic event that changed my family forever.

While I find a great sense of relief in knowing that a unanimous jury found her guilty in less than two hours, I still remain troubled by her numerous supporters….

I want to ask you this: Can you not pick a hero who has not killed two people by placing a bomb in a supermarket (with the intent to kill many more)? One who did not then place another bomb at the British consulate on the same day (said bomb was found and defused). And one who didn’t go back (alone) to the British Consulate again 4 days later placing another bomb which caused structural damage?….

I can’t help but see your support for Odeh as condoning the murders that she perpetrated. I understand that Odeh may have done good work with the Arab American Action Network. I can see she is a charismatic person. But she is also a woman full of hate and one who told repeated lies to our Immigration Services. And one whose actions resulted in the death of two young people.

Terry’s grandmother, and Basil’s mother, was the subject of our video, Mother of Rasmea Odeh victim leaves dying message:

Basil also was interviewed in an Investigative Project on Terrorism documentary about Rasmea:

In connection with Rasmea’s sentencing, Basil has sent a letter to the Court, which he provided to us. In the letter he requests permission to address the Court in person at sentencing, and also asks for a substantial prison sentence for Rasmea. Basil argues that while Rasmea need not be punished again for her crimes in Israel, the concealment of those crimes is so intertwined with the immigration fraud that the nature of the crimes can be taken into account in sentencing.

Here is the letter in full (emphasis added):

I have taken the liberty, as an interested individual, in writing to you concerning the upcoming sentencing hearing on March 12th for Rasmieh Odeh, who was convicted in your court on Monday November 10th 2014 on Immigration Fraud charges. My daughter and I travelled to Detroit from Texas to be present at that trial.

For your information, I am the older brother of Edward Joffe, one of the two young students who were murdered by Ms. Odeh on February 21st 1969 when she detonated a bomb at the Supersol supermarket in Jerusalem.

Let me at the outset assert to you that I have no interest in seeing Ms. Odeh further punished for the crimes she committed in Israel in 1969 and for which she was convicted and sentenced to life imprisonment, but served only ten years in an Israeli prison as a result of a prisoner exchange. As you so clearly explained in your court, the purpose of the trial was limited exclusively to the Immigration Fraud charge for which she was indicted. It is my firm belief, and clearly that also of the unanimous jury, that she is guilty of that charge and deserving of just punishment. I am myself an immigrant to the United States, and having gone through the same Visa and Naturalization process as the defendant, I found her attempted defense in your Court to be totally ludicrous.

That said, I do believe that she is deserving of a significant sentence, for the Immigration Fraud crimes she has committed. In order to secure a conviction, the United States was required, amongst other things, to prove that the false evidence she gave in her US Visa and Immigration applications and at her Naturalization interview was material. I recall that in your instructions to the jury you explained that false information about “jay-walking” would not be material, since it would not have caused her immigration petition to be denied. The United States presented witnesses that testified that had they been aware of her indictment, conviction and imprisonment in Israel, she would certainly have been denied the benefits she received. Consequently I believe that the nature of the crimes she committed in Israel is material and should be taken into account in her upcoming sentencing.

Ms. Odeh and her supporters allege, and despite your instructions to the contrary, her defense counsel tried repeatedly to bring into evidence, allegations that she was tortured into confession for the bombings which she perpetrated in Israel, and that she did not have a fair trial at the time. In fact these unprovable allegations are refuted by an abundance of evidence which also shows that defendant Odeh’s crimes in Israel are beyond dispute. See, for example the writings of Cornell Law School Professor William A. Jacobson ( http://www.lawschool.cornell.edu/faculty/bio_william_jacobson.cfm ) such as https://legalinsurrection.com/2014/11/rasmea-odeh-rightly-convicted-of-israeli-supermarket-bombing-and-u-s-immigration-fraud/ who shows that:

1. She quickly confessed in a highly detailed account just one day after arrest, along with other co-conspirators, one of whom also directly implicated her as the mastermind in a 2004 documentary.
2. She herself admitted her involvement in the attempted British Consulate bombing in an interview years later after release from Israeli prison, as did her main co-conspirator who implicated her in the supermarket bombing as well.
3. After arrest she was allowed to and did defend herself in the Israeli military court.
4. She was represented by counsel.
5. There was an observer from the International Red Cross present who stated that the trial was fair.

What is true and undisputable, is that as a consequence of Ms. Odeh’s heinous crimes, extreme torture was suffered – by the families of her victims Edward Joffe and Leon Kanner. My late father, who died at a very young age, was a broken man for all the remaining years of his life. My mother passed away 5 years ago at the age of 89 and suffered torment and agony for 40 years. A few weeks before she died, sensing that her remaining days were few, she asked my nephew to record on video a “Farewell Speech” to her family. In it she recounted the many blessings that her surviving 3 children and all her grandchildren and great-grandchildren had brought to her life, but she stated that “I never got over the death of Edward. It overshadowed all other events in my life”. I would be more than happy to send you a copy of this short video if you wish.

In light of her violent past as a terrorist and her un-repentant and flagrant violations of US Immigration law, I urge you to impose on her a significant sentence and to ensure that her US Citizenship and residency rights are revoked.

I recognize that she has many devoted supporters, but it is my opinion that they are most misguided in choosing such an unworthy individual as their champion. I believe that they are using her trial, which is simply a clear-cut case of immigration fraud, as a way to express their hatred for Israel and the unresolved issues between Israelis and Palestinians. I understand that Ms. Odeh may have done good work with the Arab American Action Network in the US. This, however, does not erase the fact that she repeatedly and blatantly lied on her immigration application and interview, and it does not erase the fact that on February 21st 1969 she entered the Supersol supermarket in Jerusalem, placed an explosive device, a biscuit can filled with five kilograms of dynamite, and detonated it, and instantly killing my 21 year old brother, Edward (Eddie) Joffe and his best friend, Leon Kanner.

If you will permit it, I would like to travel again to Detroit and have these words entered into the official record through a statement I would read to the Court. Please advise whether you will offer me this opportunity.

We will continue to follow this case, and will report on the sentencing.

“Rasmea’s supporters have launched a national letter writing campaign to the Judge asking for leniency.”

Those letters will surely be scanned for explosives and biological threats.

Send her to her beloved Isis for a day at the beach: