The Game is Rigged

The Game is Rigged 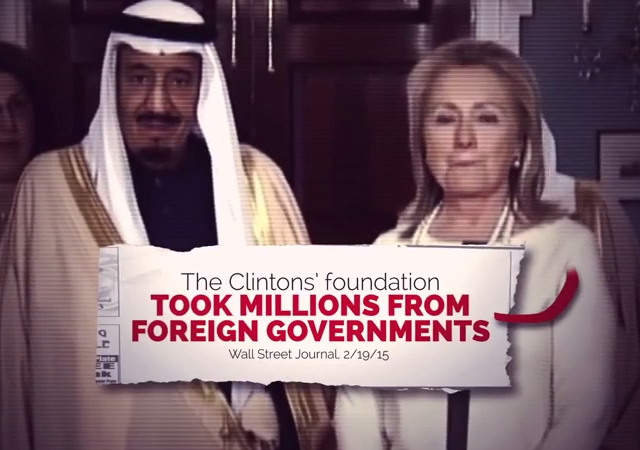 When it comes to talk of banks and money in America, Elizabeth Warren says the game is rigged.

In the case of the Clinton Family Foundation, she may have a point.

A new ad from American Crossroads uses Elizabeth Warren’s own words to skewer the Clintons and the funds they freely take from foreign governments.

In an ad released Monday, the Super PAC headed by Karl Rove attacked Clinton for reports that the Clinton Foundation has accepted millions of dollars from countries barred from making political contributions.

Watch the video. It’s short but it makes a powerful point.

The controversy over the Clinton Foundation hasn’t stopped the former first family’s appeal for donations.

“When it comes to my parents, I’m unapologetically biased. I’m sure you’d agree that they are two of the most optimistic and inspiring people in the world. In case you missed it, you still have 15 hours left to donate and be automatically entered for a special opportunity to attend our annual Clinton Foundation Gala on March 4,” Chelsea Clinton writes in an email this morning from the foundation.

“We’re fortunate to have so many incredible supporters join us for this event. This year, I’m especially excited because Neil Patrick Harris and David Burtka are going to be there. (He was great hosting the Oscars last night, wasn’t he?)

“We’ll arrange your trip to New York, where we’ve planned the whole day for you and a guest. We will provide airfare and accommodations. Action always starts with someone taking the first step. Take yours by donating now.”

Maybe when the media is finished obsessing over Scott Walker’s opinion of Obama’s spiritual life they can look into this.

Terrific! Chelsea is giving those who donate the chance to go to NYC and be counted among the elites like Neil Patrick Harris, who, according to Chelsea, was great at hosting the Oscars.

Some blog postings really should come with a barf bag because of the content!

Not A Member of Any Organized Political in reply to legacyrepublican. | February 24, 2015 at 4:19 pm

It almost goes without saying that Chelsea Clinton didn’t really write that, and those are not her thoughts.

And it runs very close to plagiarism.

Socialism and plagiarism have much in common.

In addition to being outright criminals, the Clintons have been career shake-down artists and have honed their skills to a keen edge. Very useful for parting the sheep from their wool.

Not only are they extremely wealthy themselves, but they sit atop a lake of money and influence that they dribble and drabble here and there as it seems to best benefit them. They are the very definition of the “evil 1%” that Warren and her OccupyWhatever idiot minions profess to hate (but of which Warren is also a part).

Funny old world we live in.

LOL … looking at the bottom pic of Hillary, she really does look like the wicked witch of the west from the Wizard of Oz.

That was her “Madeline Albright” phase.

That whole “rebranding” meme…strike me down, but I couldn’t help but think of a poor, evil-eyed, mean-as-a-snake old cow with her hide all covered in brands.

So money we give to the PLO is coming back to the US to Clinton so she can be a shill for the PLO? Color me shocked.

Who would know better about that game than “Harvard” Lizzie Borden Warren!