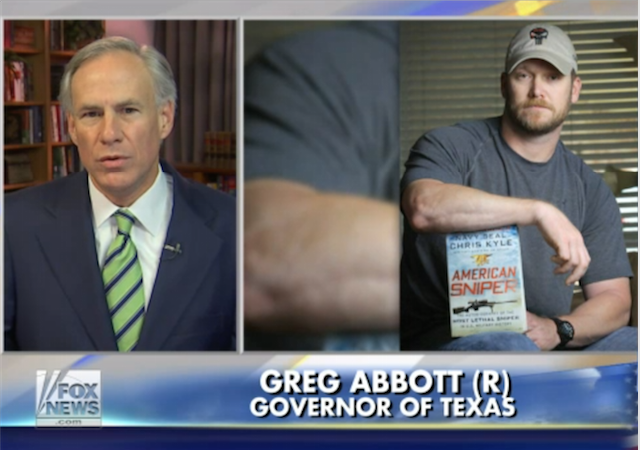 On this day two years ago, Chris Kyle lost his life.

Since then, his story has become an international sensation with the release of “American Sniper.” Patriots from both sides of the aisle have had to come forward and defend Kyle—and the military—from attacks on Kyle’s character and the role that he played during his tours in Iraq; but one state governor is going one step further by declaring today “Chris Kyle Day.”

Texas Gov. Greg Abbott declared Feb. 2 as “Chris Kyle Day” in his state, honoring the late sniper as a petition drive also gets underway to consider him for the Medal of Honor.

Kyle, considered to be the deadliest sniper in U.S. military history, is the subject of the blockbuster film “American Sniper.”

Though the movie has been controversial, Abbott told Fox News he decided to honor Kyle because “he’s an American hero.”

“He had the guts to stand up and defend this country,” Abbott, a Republican governor, told Fox News on Monday.

He issued the proclamation at noon in Austin, Texas’ capital.

Meanwhile, White House petitions have been launched calling for Kyle to be awarded the Medal of Honor.

Although the Medal of Honor isn’t on the books yet, Chris Kyle Day is—at least in Texas:

Today is officially Chris Kyle Day in Texas. I will issue the formal Proclamation from the Governor's Office at noon. #trot @ChrisKyleFrog

"America needs heroes" who do more than inspire, but protect – @GregAbbott_TX #txlege about to declare Chris Kyle Day pic.twitter.com/vY8WYgFMZV

Of course, the left took the opportunity to have a hate-filled meltdown:

@SenTedCruz @GovAbbott given his boasts about murdering random Katrina survivors, he's a perfect mascot for the GOP.

@Andypaul1976 @SenTedCruz @GovAbbott sorry but i cant honor a murderer & a terrorist & a coward. Scum kyle is no hero. Glad i dont live tx

@SenTedCruz @GovAbbott If that's an American Hero, then please revoke my citizenship. You people are sick.

I think that the fact that liberals are melting down over this is proof that it was the right call, to be honest. The American culture war is a very real battle for the hearts and minds of the American people; doubling down on an issue that’s both cultural and relates to the security and freedom of our country is probably the single most effective way to, if not change minds, at least get people to sit up and pay attention to what’s going on.

Institutional lefties wants to make Chris Kyle and others like him fade into the backdrop of history; today, Greg Abbott told them to take a hike, and for that, he deserves our gratitude and our support.

Thank you Governor Abbott, and thank you Chris Kyle, for making this country a very uncomfortable place for those whose life calling it is to roll back freedom.

Glad to be a Texas native. Especially sweet since I live in the blue part of Oregon most of the time.

you ever think that something is nice yet have a really powerful feeling that its going to cause problems?
thats the feeling I have right now and I cannot even begin to explain it.

Abbott should have had Eastwood announce it — “Go ahead, make it Chris Kyle’s Day!”

Murder in self-defense or another choice. The “make abortion, not life” people are treading water or perhaps fire.