Served Up Raw and Painful 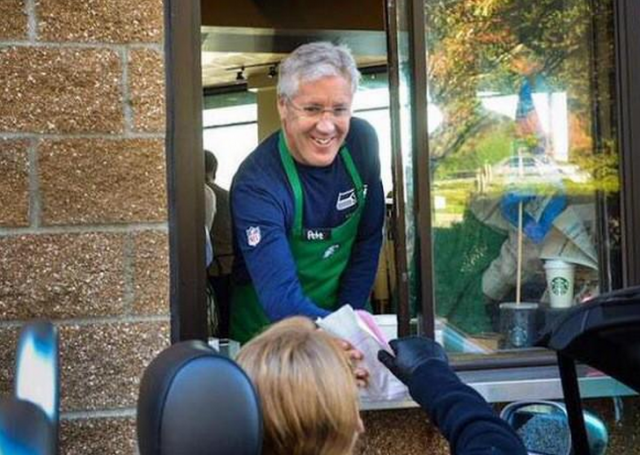 Should I hand this to you, or step back 8 yards and throw it for no reason? pic.twitter.com/uXnmx9NdPE

Boy, that first quarter was amazing. What a stalemate! The Seahawks lost, but my gosh, what a fight! And really, the Seahawks look like the superior team. Just saying….

Except when the cheater’s coach is up against a dumb$%& coach, who can’t figure out how to try to win the game!

To be honest I didn’t like either team but I thought that the Seahawks had it until that stupid pass play. But when asked by the dumb asker, Carroll replied that “We made the call and i stand behind the team”. He could have blamed his offensive coordinator but he didn’t. That’s a class act and then he went on to say that the Patriots played a great game. No reason to bad mouth him IMHO.

That pass will go down as one of the dumbest calls in a Super Bowl.

But it was an exciting game, right down to the final seconds. Much better than the commercials or the goofy Half Time show.

I haven’t watched football in over 25 years and didn’t see this game. But, if the coach had called a running play and it failed, the complaint would have been, “He should have passed – they would not have expected it”. If the pass had been completed the coach would be proclaimed “brilliant”. Can’t win for losing.

The situation was that it was only second down and goal (from around the one) with about 20 seconds on the clock and the Seahawks had one timeout remaining.

With a baby bulldozer as your running back, the optimal strategy is to do the lower risk running play first. Then if he fails to score, they call a timeout and regroup for the final play of the game.

Not only was the pass play a bad decision, but they ran a slant route in which the receiver ends up in the center of the field – already highly congested because they are so close to the end zone. The play call was bad and Wilson made a bad decision throwing the ball into the highly congested center of the field rather than throw it out of the endzone to extend the game another play.

Two chokes. The play calling and the poor decision by Wilson.

I understand where you’re coming from, but…if that pass had been completed for a touchdown, we would not be having this conversation. We would be talking about the other coach’s mistakes and what he should have done.

Regardless of whether the play succeeded, the call was stupid. Coaches of junior high teams don’t make that mistake.

No one would have called it a stupid play if succeeded. No one. They’re only stupid after they don’t work out well.

Both calls were far from the obvious, conventional call. One went the Seahawk’s way, one didnt.

Would I have called for beast mode at 1st and goal on the 1/2 yard line with 30 seconds in the game? Absolutely. But you don’t win football games by always doing exactly what the other team expects you to do. And they were down to a single time out — they could only make one running play. He wanted to get two shots at the end zone — had the pass been incomplete, it would have stopped the clock and then they could still have handed it to Lynch.

It didn’t work out, but it wasn’t nearly as stupid a call as it will now appear to everyone.

My sympathetic figure of the night: Jermaine Kearse. That amazing catch would have been the only thing we’d be talking about this morning, if the Seahawks had just won. (If he’d gotten up with the ball a second sooner, or Lynch had gotten another half a yard, or Pete Carroll hadn’t tried to get clever and squeeze out an extra try for the win — which he wouldn’t have done if they hadn’t been charged a timeout moments earlier because it took them too long to get back on the line. So many might-have-beens.)

Interesting game. Pete Carroll lost the game long before that ill-conceived pass play with 30 seconds left. With his personnel, it shouldn’t have been close.

His offense clearly wasn’t prepared for press coverage. His receivers tried to run their routes, failed, and gave up on the play. His QB is contained in the pocket with no one to throw to as the receivers stopped running. Didn’t anyone coach these players or look at the Green Bay game? The receivers weren’t coached until almost the half to take an angle away from their defender and take off running to present a target.

On defense the Seahawks played their zone defense a great deal. What a total waste of personnel. They have two or three guys deep to prevent the offense from passing deep over the middle. That’s ludicrous. The Patriots have no vertical passing game. They haven’t thrown a deep ball over the middle in years. For the entire season, Brady has thrown a handful of balls over 20 yards, always to the sidelines, and none over 30. (The Patriots get tons of yardage after the catch.) If you drop three guys deep, you’re playing defense with eight men. Even worse, if you back off five yards or so, you’re giving the Patriots easy yards and easy first downs. That’s what they live for: they use short passes the way other teams use a running game. The Seahawks played better defense when they lined up right on the line of scrimmage, but they weren’t prepared at the start of the game.

And the Seahawks took their foot of the gas when they were ahead by 10. There can be no let down.

That being said, the Seahawks had impressive personnel. No one has been able to cover Gronkowski one-on-one, but the Seahawks did. That’s just amazing. Even with poor alignment and a bad injury, they clearly had better players. Impressive speed.

The Patriots had Edelman and Gronkowski, but they clearly executed a well thought out game plan. Brady and others are basically cogs in Belichick’s machine. They are a one-dimensional team on offense and defense, but they do it better than anyone else.

Poor coaching can cost you the game. The Ravens gave away the game in the last minute, and the Seahawks gave this one away with 30 seconds to go.

I read your blog primarily for the maturity displayed. Gloating is NOT mature.

Another inland Northwesterner here, agreeing with you, Anonamom.

I know at least one Northwesterner who’s probably just as happy with this outcome because she finds it so annoying to hear so many supposedly mature adults gloating about a football game they had nothing to do with.

Having lived in Seattle during the startup years of the Seahawks, I am used to the clutch choke. The Patriots firmly and methodically worked their game plan. Sure and steady won… But as in the Giant’s helmet catch, the last few seconds of the game held the same potential for loss for the Pats. Two out of three things can do wrong with a pass… dropped or intercepted…. it would have been a glorious ending to try and win with the ground game as only Seattle COULD have done. Next year I bet the footballs will only be those of the officials just as in baseball.

You also forgot sack and/or fumble. As a general rule, runs are lower risk than passes.

It was a dumb call, and I feel bad for Wilson (but I’m glad to see Dickie Sherman go home empty).

Praise the Lord it’s over for 11 months.

The month of January is a lousy, boring, dreary month to begin with. Then being subjected to this idiotic Stupid Bowl crap on the news, on the ‘net, and every newspaper 24/7 just makes it tenfold more miserable.

Well, I did consider that Hawk pass play a dumb call,like it was scripted and that’s what was called for. Problem: they weren’t the Niner’s of Olden Days scripting the first 14-plays of the game regardless of game results.

Their coaches should have figured out the situation and what it would take to win the darned game; saving time-outs didn’t answer that question. Saving time outs not the ultimate goal.

But, years from now, people will be arguing that call on both sides. Yet, “Little Taina” won’t be here, her beck is cracked and she’s off healing, suffering from her terrible ordeal here, associating with such us’ins low lifes.

OBTW: The real game killer was that off side call against the Hawks on Boston’s attempt to get out of their end zone. Script that situation and what the potential results might have been.

As someone living just outside Seattle, I am disappointed in the outcome of the game, and initially I was upset at the call. After giving it some thought, I realized if I was coaching the team would have been 0-16.

Every single play in the Seahawks playbook has been parsed over and over looking for the most likely weaknesses to exploit. Butler was the one to test, and he stepped up and made the play. Wilson’s pass was on the money to Lockette, Butler simply read the play perfectly and stepped in to intercept it.

There was only 18 seconds, and 1 time out left, not time enough for 3 plays, only 2; Lynch had already been stopped in the first half trying to run it in…

The fact is that Seattle had an opportunity to win despite 2 critical injuries to starters that clearly resulted in Patriot scoring at least one touchdown against the replacement (Simon).

The catch by Kearse was incredible, and could have rivaled the “Immaculate Reception” in Super Bowl annals had Seattle won. It actually looked like destiny favored Seattle.

It was a great game, and the Patriots won. Both teams made it a very exciting game.