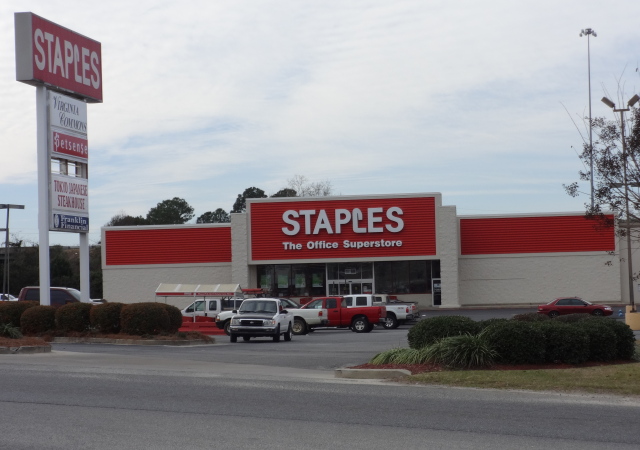 Due to regulations imposed by Obamacare, some businesses are cutting the work hours of their employees. This was a known, predicted consequence of the Affordable Care Act. Staples is just the latest newsworthy example.

Remember, businesses can only try to survive under the given set of rules—but some employees are having a hard time keeping that in mind when they see their pay stubs.

Part-time Staples workers are furious that they could be fired for working more than 25 hours a week.

The company implemented the policy to avoid paying benefits under the Affordable Care Act, reports Sapna Maheshwari at Buzzfeed. The healthcare law mandates that workers with more than 30 hours a week receive healthcare.

If Staples doesn’t offer benefits, it could be fined $3,000 in penalties per person.

Buzzfeed spoke with several Staples workers who revealed their hours have been drastically cut over the past year. Many reported working as few as 20 hours.

The workers started a petition on Change.org asking the company not to “cut part-time hours because of Obamacare.”

It’s terrible that these folks are losing work hours, but it’s not unexpected, and it’s not the fault of Staples—that’s just as far as an employee wants to look when it’s suddenly gotten harder to pay the bills and feed their families.

Richard Pollock of the Daily Caller:

Anyone who receives Obamacare subsidies could be in for a rude awakening this tax season.

Four in ten low-income Obamacare participants will face sticker shock this April 15 when they discover they owe a great deal of money to the IRS because of a little-known “clawback” provision in the health-care law.

A family of four could owe the government as much as $11,200, according to a 2013 prediction by researchers at the University of California, Berkeley.

The idea that struggling, low-income Obamacare enrollees would have to repay the government for subsidies has been a dirty little secret that has always been part of the Affordable Care Act.

Although its existence has been known since 2010, neither Obamacare advocates nor the Internal Revenue Service have widely publicized it.

Funny. I don’t remember hearing that in the talking points.

Hey Staples workers who voted for their messiah …. how’s that hope and change working out for you?

Sorry, walls, was posting mine the same time as yours.

and BOY do they get mad when you ask them that… 🙂

it brings a smile to my face every time, and i *never* smile.

I had a hippie chick who worked for me and voted for Obama. Even she could see the pending destruction of Obamacare, and she and her hippie friends were vehemently opposed to it. After Obamacare passed, I asked her if she was still happy with her vote. She looked at the floor and shook her head.

I like to think that there are many young people out there who have enough sense, like this young lady, to realize that all this “cool” progressive crap that the Jon Stewarts and Bill Mahers push has consequences. Hopefully, they’ll have time to reflect on that while they stand in the unemployment lines and adjust their voting accordingly. Unfortunately, they might conclude that more entitlements is the way out of their misfortune…lots of that going around these days.

I thought we were all happy warriors. My bad.

The first questions we ask ourselves after reading a story like this: “How many of these people voted for Obama?” and, “How many voted for him twice?” I will ask a third one: “How many blame the GOP for their plight?”

most, if not all of them… i hear the whining all time here in my part of Lost Angels, #Failifornia.

then they get even madder when i laugh at them and say ” i told you so, suckers!” the dumb ba5tard5 still believe everything the MFM tells them.

It’s just amazing how much the “Rightwingnuts” called correctly, and were called “racists, teabaggers, Nazis, etc” for saying. And now the effects we foresaw are headline news. And everyone (on the left) is surprised. They never saw it coming.

They advance the Socialist cause without even knowing they’re doing it until it’s too late.

“The workers started a petition on Change.org asking the company not to “cut part-time hours because of Obamacare.”

And now we see exactly why they’re working a part time retail position.

We only ever have store-brand cookies in our coffee room. I’m going to petition the government via change.org to demand my right to free Milanos. Also, I think our bosses should be responsible for not just our health insurance, but our car and home & contents insurance as well. Also, a pony. I’ve always wanted a pony.

Oooo, I want a pony too!
Can gov’t mandate that someone else provides a stable, food and pays the vet bills? I’ll need a saddle and stuff too.

And you’ll probably hire an illegal alien to clean up after that pony.

You people have extraordinarily limited aspirations. Me, I’m holding out for a unicorn. With a mane and tail of rainbows.

You’re so right, I want a unicorn and an alien to clean up after it…but not just any alien, a Martian!

Meanwhile, the media assure us that the economy is booming and Obamacare is working….

Sadly, depends how you define working. Yes, it is “working” well to destroy healthcare.

Just wait until all those folks on the expanded Medicaid rolls find out about the “estate recovery” provisions in that program.

If they have any brains at all, and if they have engaged in any form of ‘estate planning,’ no, they won’t.

The goal of every person should be to die with approximately $2000 to their name total in cash and personal assets, having pre-paid for their own funeral expenses and created an irrevocable trust to hold all their property at least 731 days earlier (if I remember my “gift & estate tax” course properly, it might be 1,096 days). The point is to have just enough to your name to cover this month’s living expenses and no more.

At that point, there is no clawback because you die “destitute” and no provision for clawing back the “devise” from your irrevocable trust to the beneficiaries. It’s the ultimate way to give the government the finger.

I think, Chuck, that the “Service” (deeply ironic name for the IRS) can claw back a bequest or gift years down the road if they can implicate fraud in making the gift. Could be mistaken, but they do have remarkable powers ordinary mortals don’t, and most of us would not want.

The other day we were reviewing the idea of “economic law”. Those laws exist. They are immutable. You can’t suspend them because you think you are a “bright”.

ObamaDoggle is a quiver of assaults on economic laws. It CANNOT work. It was sold on a pack of lies. It is supported by lies.

But, the longer it is allowed to stand in ANY form, it will continue to rip through our economy, killing jobs, business formation, and prosperity on every level of our economy for everyone BUT a very few cronys.

In the Cloward-Piven view, yeah.

Most of these people will fall right in line with the democrat class warfare ideology and blame the greedy wealthy business owners for their loss of income and become even more dedicated to the democrat version of social and economic justice.

They are not really good at that “if P then Q” type of thinking.

Duh. I would fire the managers who schedule part time workers for more than 25 hours a week!

Hence. The statement should “Staples threatens to fire MANAGERS who schedule employees for more than 25 hours a week”

PS. My comments are informed by the fact that I have a friend who works at Staples, and he informs me his managers make sure he is not scheduled for more than 25 hours.

I read that the clawback has been softened. I don’t recall the details: I think they still have to pay but they don’t have to write the check on April 15th.

As someone once said: “ObamaCare, the program so awesome that it will be implemented right after the *next* election!”

Uh, anybody can delay writing a check on 4/15. Just file the return on that date and wait for them to bill you. With interest and penalties tacked on, though.

How many managers will just up and quit as a result of mandatory coverage for those unstaffed “operational” hours and find themselves working, on salary, 6 and 7 days a week putting in 90 to 100 hrs.?

The note about the penalty doesn’t explain it enough. The penalty is $3,000 for every singly employee of the company, not just those who are classified as full time (a ridiculous 30 hours per week standard according to Obamacare). So, if 5% of the f/t workforce isn’t being offered coverage (the threshold for the fine to apply), the company gets to pay a $140,000,000 fine – every year. Again, $140 Million ($3,000 x 46,000 employees). The risks are huge so the company has little choice but to threaten to fire workers who work over 25 hours in a week.

A young woman can make out like a bandit by quitting her job and embarking on a breeding program, since all the perinatal costs are covered by Obamacare, and then she gets free food, tax credits, healthcare and education for the kid. She will come to regret those days she got out of the house and worked!

Recall the Life Of Julia? Cradle to grave Obama welfare.

I have a friend who just told me that she was fined about 400 dollars for not having insurance through 2014.

Isn’t it supposed to be ninety something the first year?

Or is it that my friend did not understand?

I should have googled it before asking. Sorry.

A rough awakening is-a-coming for a lot of folks.

No worries. But a year or so ago, there were a lot of brave right-wingers (even on this site) blustering, “I’m not going to get Obamacare, Imma just pay the $95 tax!” Some of us tried to point out that the “$95” was going to be the LEAST they’d pay, but that didn’t seem to get much cut-through.

Of course if you’re self employed and make damned sure you don’t send the feds a penny more than they’re entitled to take, you can bypass the min or max. There’s no mechanism for enforcement for those of us who pay full freight.

Elections have consequences as obama is fond of reminding people. Be careful who you vote for, you just might get a monumentally historically incompetent socialist.