Irony that Cornell fee for NOT purchasing university plan mirrors Obamacare penalty, which most students support. 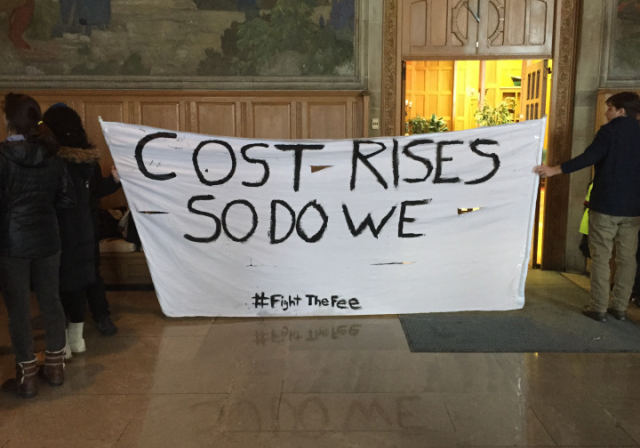 “Socialism is like a nude beach. Sounds pretty good until you actually get there.” Iowahawk on Twitter

Last week, Cornell’s President David Skorton dropped a bombshell on the student body when he announced, in an email sent to all students, a $350 student health fee to be levied on all students who do not purchase Cornell’s Student Health Insurance Plan (SHIP) starting next academic year.

Immediately, the campus erupted in outrage over yet another hike in the cost to attend Cornell—one that would not be covered by financial aid because it is a fee and one that was announced so suddenly without any warning from the University administration.

The Cornell Review, the campus’s conservative publication of which I am Editor-in-Chief, was the first to break the story and has worked diligently all week gathering and reporting as much information as possible to bring the situation to national attention. I am scheduled to appear on Fox & Friends Sunday morning (tentatively 7:20 a.m. Eastern)[see update below] to discuss the student protests.

When the fee was first announced, the student body—conservative, liberal, and apolitical—united in a way it rarely does, directing collective indignation towards the administration for shoving more costs onto students and their families.

For the past five years, Cornell tuition has risen on average by over 4% per year, and this fee is yet another onerous cost to attending Cornell. Many students complained about having to pay the fee despite never having visited Gannet, the student health center; some say they never plan to visit Gannett because of alleged poor quality service and long wait times (though the University touts Gannett’s high quality services ratings from outside groups). 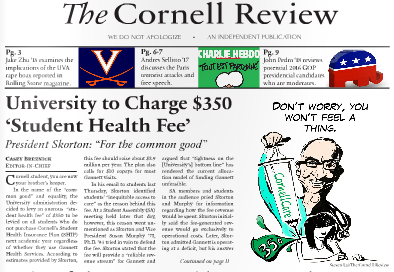 Drawing by Steven Lai of The Cornell Review.

The usual crowd of leftist students on campus quickly organized the #FighttheFee group to lead protests against the student health fee, and on Monday, Feb. 9, they occupied the campus’s main administrative building for several hours.

Over 100 students sat in hallways, administrators’ offices, and boardrooms, occasionally delivering speeches. A group of about 30 made it into Skorton’s office, and a #FighttheFee member videoed the ensuing, extremely disrespectful 40-minute ordeal, during which the left-wing students accosted, laughed at, and taunted Skorton. Skorton, for the entire time, retained composure, but in a brief moment of irritation snapped back at students: “The fact you’re pissed off doesn’t change the bottom line of the University.”

We at The Cornell Review were quick to recognize the stark commonalities between the student health fee + SHIP arrangement here at Cornell and Obamacare on the national level.

As Obamacare dictates people must either buy health insurance or pay a tax, Cornell is now requiring students who do not purchase SHIP pay the health fee. Of course, there are distinctions between each case–namely, attending Cornell is optional whereas paying taxes is required.

Still, the underlying principle behind the fee implementation and Obamacare are the same: the redistribution of wealth in order to provide “for the common good,” as Skorton stated. Skorton also cited “inequitable access to care” as another reason why the fee was implemented, and pointed out that Ivy peer institutions all have similar health fees. The irony of the entire situation hit an all-time high when Gannett’s director cited rising healthcare costs as another reason why the fee is needed.

Essentially, both the fee and Obamacare are redistributionist policies which seek to extract from some in order to subsidize others. In some ways, however, the Cornell student health fee is worse, because it’s not only a redistribution of wealth, it is an administrative bailout to the tune of a cool $4 million. It’s a double-whammy of liberal ill-logic and progressive policy.

During a Q&A with students held later in the week after the protests, University Vice President Susan Murphy divulged the true nature of the health fee: $150 was going to “expansion of health services,” $130 to paying for increased staffing, and $70 to paying a 2-year loan in excess of $4 million that University originally borrowed to pay for the increased staffing at the student health center. Those interested in reading more about the fee’s finer details can read my report here. 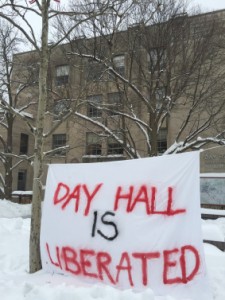 What is rather unsurprising about the entire situation is that the leftist and liberal students in campus, who led the protests and are some of the most vocal in opposing the health fee, are acting in the same hypocritical fashion as they usually do.

These are the same students who almost surely all vote for Democrats and support redistributionist, big government policies, but when it comes to their own pocket books they are suddenly outraged. Clearly, only when redistribution of wealth negatively affects them is there a reason to protest and fight back, but when such policies are negatively affecting “the rich” or “the 1%” it’s completely justified.

On Twitter, the #FightTheFee hastag was “hijacked” by conservatives:

You wanted universal healthcare for all, now you get to pay for it! Welcome to Obamacare. #FightTheFee

#FightTheFee. This is exactly how Obamacare works any students supported that place. Different when you pay isn't it

Some of these leftist students argue the fee is a regressive tax, and it therefore redistributes wealth from the poorer students to the wealthier ones. True, all students without SHIP must pay the same $350 and $10 co-pays regardless of student or student family wealth status, but the health fee redistributes from those who do not seek any or a lot of care from Gannett to those who do. And even though no one wants to admit it, it is most likely the case a small minority of students make up a majority of the cases seen and treated at Gannet, as is the case on the national scale. Political correctness, however, forbids campus debate about this very crucial point, and it obscures from many how truly redistributionist in principle and in effect this fee is and will be.

All in all, this ordeal, still on-going, just goes to show how much of a bubble Cornell and most other college students live in. But what is truly disturbing is that when the bubble pops, they frantically try to patch it back together rather than face reality.

LOL! Day Hall takeover! Reminds me of my time as a freshman engineer when I protested at Day Hall because the Artsies took over Carpenter Engineering Library to protest DuPont [maker of napalm] interviewing Cornell engineering students during the Viet Nam war.

Re: Gannett Clinic, bring in alum Sandra Fluke to call for free birth control pills for the student body. That should take the heat off administration protests in Day Hall ….

Bizpac lists some more tweets (linked below) laughing at the Obama supporters sadly “mugged by reality”:

Just out of curiosity, how does this new fee impact students who might have health insurance from outside of Cornell – a student covered by a spouse’s policy, for example – and therefore neither need nor want the Cornell policy?

I think that that understates the issue – under ObamaCare, students are covered by their parents’ healthcare insurance until the age of 26. Most undergraduates are under 26.

That was my first reaction too. I’d bet that 95%+ of the students that this applies to are already covered under a much better plan from their high-income parents.

$350? That’s nothing. That degree in Gender Studies will pay you at least twice that each month after you graduate.

We don’t call them useful “idiots” for nothing.

“Idiots” maybe; even probably. “Useful”, on the other hand…

A quality education costs money. This a good education, although I expect few of them to get a passing grade at the final.

“Obamacare dictates people must either buy health insurance or pay a tax,…”

It’s worse than that. Obamacare took away the insurance that people were already buying, and then ordered them to buy a policy that’s much more expensive, or else go through the indignity of seeking a “subsidy” for a policy that’s inferior in the ways that matter to them and generally unsuited to their situation.

Moreover, someone who’s self-employed and doesn’t buy the government’s lousy insurance is probably paying higher taxes anyway as a consequence of not deducting health-insurance cost from income. Tacking an extra penalty on top is nasty — especially when it was government that caused the loss of insurance.

Students will have ANY WISDOM and realize that this is just the tip of the troubles to come when socialism is involved,

they will become true winners , sooner than later

look to Ferguson and the plo led riots er I mean, protest and college campuses that had so called “progressives” assault others so that they COULD NOT EXPRESS THEIR POV

dont wait 30+ years to figure it out

All socialist programs have to be paid by YOU

VOTE BUYING DONE by the Dems ( and many rinos too)

it means YOU have to pay for others BY FORCE

Since some students receive health care under their parent’s insurance until the age of 26, could Skorton’s policy be seen as double-dipping?

Indeed this is NOT like Obamacare for already noted reasons. This is just a dispute with a private college and its customers, over a price increase. The 4%/yr increase at Cornell appears lower than average over five years. From 2003 to (iirc) 2013 the increase average is 79%. Increases slowed the last five years, but still above 4% (varies a little if you count increases in various “scholarships”).

President Skorton sold it as covering things like an H1N1 outbreak, and prep for other campus wide concerns (common good). That and the voluntary purchase of the overall Cornell product seem to make this a weak example of either forced redistribution or a progressive tax.

The fee does NOT seem to be for not purchasing SHIP, since the fee is essentially already included IN SHIP, and SHIP buyers (and the university’s debt) were footing the whole bill for other “common good” portions mentioned above (plus it seems non-SHIP students still have convenient access to some services for a mere $10 co-pay). So the fee just eliminates the subsidy from the SHIP payers to the non-SHIPpers.

imo, these leftists on campus don’t really contradict belief in the strong form commie system. They really shouldn’t have to pay ANY tuition or fees, as they are in training to be non-armed educated forces for the common good of the state. This is in solidarity with Obama’s free junior college thang.

When they start making money, they will pay in according to their ABILITY. Now it is all going out, so “not fair” since they are in NEED. Hence, No irony.

Of course I don’t know exactly what THEY are arguing (it does not look regressive, except that the fee is on poor students, not the rich state), but from a commie view they seem on point.

It’s probably still good to make a point about them whining over having to pay for what they or others get, but it doesn’t seem that hypocritical since students are the poor, not the rich … in income at least.

oh, and sorry if my earlier sarcastic response was crude, but the crushing blow to our country is the $100 Trillion in unfunded liabilities largely in entitlements. That is the huge (socialist) Ponzi scheme that has been ongoing for decades, and is the iron boot that will crush us.

Protesters are right to fight cost increases, they are propelled by government extending more easy credit, as they did to the housing market. But the 100 trillion pound gorilla off campus is the mushroom cloud of debt (to mix my metaphors).

I feel for the poor, underprivileged Ivy League elites.