None died of heat stroke 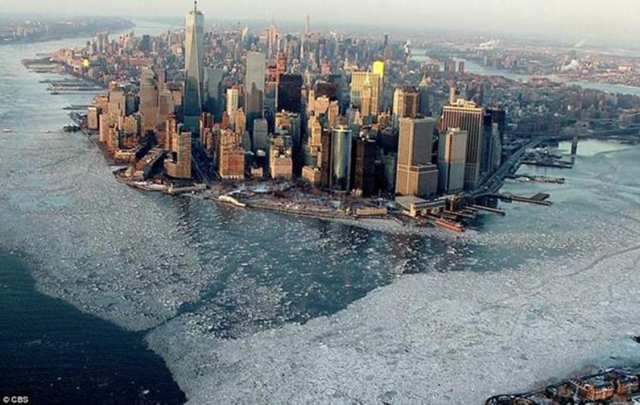 The hottest topics in weather today are the officially-named winter storms that are being covered as enthusiastically as hurricanes once were.

Winter storms Pandora, and the associated Siberian Express, are well-chronicled via social media.

The photos are amazing:

And so are the videos:

Tragically, however, over two dozen Americans have died as a result of the frigid weather.

…Nearly a week of cold and ice has contributed to 18 weather-related fatalities in Tennessee since Monday, according to the Tennessee Emergency Management Agency. They include nine people who died of hypothermia and five victims of motor-vehicle accidents.

And in Kentucky, 10 people have died since Monday in weather-related incidents, said Buddy Rogers, a spokesman for Kentucky Emergency Management.

Pennsylvania authorities said Friday at least two people had frozen to death outside.

A 119-year-old record low temperature for February 20 was broken in Washington, with a temperature of 5 degrees Fahrenheit (minus 15 degrees Celsius) recorded at Ronald Reagan Washington National Airport.

Of course, official government spokesmen are touting the “global warming” scenario to explain this particularly deadly bout of “climate change”.

“Heavy snows mean the temperature is just below freezing, any cooler and the amount would be a lot less,” adds Kevin Trenberth, a climate expert at the National Center for Atmospheric Research. “Warmer waters off the coast help elevate winter temperatures and contribute to the greater snow amounts. This is how global warming plays a role.”

Yes, it might sound strange, but it can actually snow more when it’s a bit warmer — not too warm for snow, of course, but not extremely cold, either.

For me, there are two troubling aspects to the story. The first is that those bureaucrats and politicos in power have admitted to using “global warming” as a tool to change the direction of human progress.

The term “climate” is typically associated with annual world-wide average temperature records measured over at least three decades. Yet global warming observed less than two decades after many scientists had predicted a global cooling crisis prompted the United Nations to organize an Intergovernmental Panel on Climate Change (IPCC), and to convene a continuing series of international conferences purportedly aimed at preventing an impending catastrophe. Virtually from the beginning, they had already attributed the “crisis” to human fossil-fuel carbon emissions.

A remark from Maurice Strong, who organized the first U.N. Earth Climate Summit (1992) in Rio de Janeiro, Brazil revealed the real goal: “We may get to the point where the only way of saving the world will be for industrialized civilization to collapse.”

Former U.S. Senator Timothy Wirth (D-CO), then representing the Clinton-Gore administration as U.S undersecretary of state for global issues, addressing the same Rio Climate Summit audience, agreed: “We have got to ride the global warming issue. Even if the theory of global warming is wrong, we will be doing the right thing in terms of economic policy and environmental policy.” (Wirth now heads the U.N. Foundation which lobbies for hundreds of billions of U.S. taxpayer dollars to help underdeveloped countries fight climate change.)

Also speaking at the Rio conference, Deputy Assistant of State Richard Benedick, who then headed the policy divisions of the U.S. State Department said: “A global warming treaty [Kyoto] must be implemented even if there is no scientific evidence to back the [enhanced] greenhouse effect.”

The second is a bit more personal. Pope Francis is poised to issue an encyclical next month that touches on global warming. Fellow Catholic, physicist, and climate science activist, Dr. Martin Fricke, is also disturbed by what amounts to faith based science.

The misguided comments of our Holy Father, the beloved Pope Francis, about global warming have stirred things up even prior to his anticipated encyclical. The pope, as most know, has included the reduction of Carbon Dioxide (CO2) among the things crucially needed to help the poor, helping the poor having been his lifelong crusade. Unfortunately, he has been advised by the Pontifical Academy of Sciences, specifically the Catholic Climate Covenant. In turn, the Covenant relies on the U.S. Environmental Protection Agency (EPA), which uses the now fully discredited results of the United Nation’s Intergovernmental Panel on Climate Change (IPCC). The IPCC has predicted that rising levels of CO2 in the earth’s atmosphere cause a “crisis” of increased global warming producing catastrophic damage worldwide. In fact, the global temperature has not changed for the past twenty years; and CO2 has been conclusively shown scientifically to have no effect on global warming.

Since Pope Francis is keen to help the poor, perhaps someone in his inner circle can inform him that warming is better for humanity and the needy suffer most during cold weather.

The Pope’s timing is almost as good as Al Gore’s: Winter Storm Quantum is on its way. I will be praying for the safety of those on the East Coast at Mass today.

I guess I’m safe, since I listen to The Mannheim Steamroller on Spotify.

When did we start getting officially-named winter storms anyway?

And which body officially names them? The National Weather Service? NOAA? The Bureau of Meteorology?

Or is this just some cable TV gimmick that everyone’s fallen for?

Good question, my friend. Winter storm naming has been used by The Weather Channel since 2011. http://www.weather.com/news/news/science-behind-naming-winter-storms-weather-channel-20140121

2012. In 2011, Snowtober was just a nickname was a Halloween nor’easter. The weatehr CVhannel did not begin systematically naming storms until November, 2012, when they prepared a lost starting with the first letter A.

So it’s just some cable TV gimmick that everyone’s fallen for.

Weather channels and reports seem to be more and more hyperbolic, knowing that it scares people, who tune in more for updates. Here in eastern NC, local weather reporters have not only gone to wind chill temperature forecasts, but they aren’t even identifying them as such on their maps. I looked up the other day and saw that my area was expecting -25 F temps for Friday night, no ‘wind chill’ label anywhere on screen or verbally. -25 F? Huh? Yikes! Not believing that, I had to go online to find out those were just wind chill predictions.

You have to be alive and possess a nervous system to feel wind chill, but people need the real temps, not just the scarier sounding wind chill, to know when to worry about pipes freezing and such. Anything to punch up ratings and ad rates, I guess.

When did we start getting officially-named winter storms anyway?

These are names given to storms by The Weather Channel and nobody else in the weather forecasting business uses them. (per Wikipedia)

The U.S. government-operated National Oceanic and Atmospheric Administration (NOAA) (a division of which–the National Hurricane Center–has named hurricanes for many years) and its main division–the National Weather Service (NWS)–did not acknowledge TWC’s winter storm names and asked its forecast offices to refrain from using the TWC names.[12] In a November 2012 memo, it requested that its employees avoid referring to storms by name…Private weather forecaster AccuWeather has also disagreed with the practice of naming….In February 2013, media organizations such as The New York Times and The Washington Post stated that they would not use a name such as “Winter Storm Nemo” for the February 2013 nor’easter.[8][17] However, some outlets such as New York mayor Michael Bloomberg’s office used the Twitter hashtag “#nemo” to refer to the storm..

The United States Postal System (USPS) used TWC’s name, Juno, for the storm that hit the northeastern US 26-27 January 2015 in its (USPS’s) service alert on its web site about the storm’s disruption of the mail.

The Weather Channel was not the first organization, or website, in the United States to attempt to name
storms.

The “Ontario Weather Service” in Ontario, California, did it for southern California storms in the mid-2000s decade. Kevin Martin, who runs/ran it, in fact, had been doing this since 1999.

Back to the point of the post though (sorry for the distraction!), we’ve been getting record cold temps here in northern Florida as well. Below freezing for several nights last week. Because a lot of houses here aren’t built for that kind of weather, and many don’t have insulation or central heating, we’ve been seeing more housefires than normal, thanks to dodgy space-heater use.

It’s absolutely true that cold weather kills more people than warm weather, and absolutely ridiculous that the Pope has jumped on the “catastrophic man-made global warming” wagon with the rest of the anti-progress misanthropes of the Left.

Warmies are misanthropic miserablists who wish the Industrial Revolution had never happened and who would be happy to turn us back to some dark ugly pre-modern time.

When you hear any Deemocrat or Collectivist recite the lie that they give a fig about the middle class or the “working people”, bear in mind that they want you and I to live in darker, less comfortable, less healthy, less well-nourished, less educated, and less traveled circumstances.

The Collective HATES people. You can tell by what they would do if given their ‘druthers. And knowing that isn’t hard. They have told us.

Well, people are bad. Do you know how much energy is required to sustain a human for a lifetime? They’re just culling the herd.

How these leftist idiots have managed to create the public impression that they’re “for the people” is beyond me. And don’t get me started on “Planned Parenthood.” Planned Genocide is more like it.

Somehow, someway this will be fit into the global warming scare and how “the experts predicted this all along”

These dilemmas were simply too easy to solve, so the desperate turned to more systemic elements of biology: Carbon dioxide and Ozone (remember when ozone was good?)

I recently snapped a pic of some foam insulation for a building that claim to be “Ozone depleting” as a good thing. Try using that stuff in the 90s during the arctic hole scare.

(BTW Ozone depletion within a building IS a good thing. I just like to troll the climatologists.)

Just don’t ask them whether, since they believe CO2 is “carbon pollution”, they think ozone (O3) is “oxygen pollution”. Or whether rain (H2O) is “hydrogen pollution”. They get whiny and foot-stompy.

Quit being so mean!

“I will be praying for the safety of those on the East Coast at Mass today.”

Thank you, Ms. Eastman, from a fellow Catholic on the East Coast.