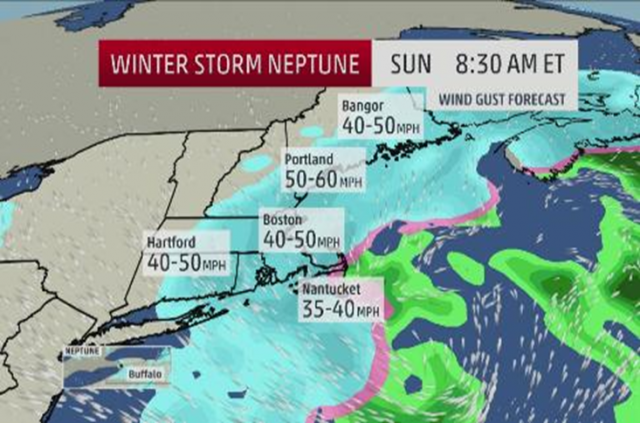 “Global warming” has long been bandied about as “settled science.” However, in what can reasonably be termed as a “science-based crime”, scientists have been caught adjusting their raw temperature data to enhance the supposed global warming effect.

This fakery is really too bad for Professor Jacobson, who is spending the day shoveling the snow from Winter Storm Neptune.

The storm’s predicted barometric pressure, a measure of the storm’s intensity, “is typically observed with a Category 2 hurricane,” the National Weather Service in Boston said. The heaviest snow will stretch from northeastern Massachusetts to coastal Maine with more than a foot expected, AccuWeather predicts. Wind gusts could approach 70 mph in some spots — strong enough to cause structural damage and widespread power outages, the weather service said.

You know a storm is going to be bad when it is given a name, and the state’s governor makes a statement about it before the first flake strikes the ground.

“New Yorkers should take every appropriate precaution as subzero temperatures and blizzard-like conditions hit the state this weekend,” Cuomo said in statement.

According to the National Weather Service, [Gov. Andrew] Cuomo said some areas of the state may experience some of the “coldest temperatures in generations.”

Cuomo claimed that temperatures at LaGuardia Airport may drop to their lowest since 1943 and Central Park may experience its lowest temperature since 1888.

Back in California, I’ll be strolling along the beach enjoying sunny weather. However, my state is also facing its own generational climate crisis — a drought that is the worst in US history, and severe enough to earn the term “megadrought”.

What if these two weather events are related. When the global temperature drops, water is retained by the glaciers that would normally be in the atmosphere. A good example comes from the analysis of an 1200 BC “megadrought” that lasted about 300 years and decimated crop production in Greece, Israel, Lebanon and Syria.

It looks like we’re in a global cooling period. In 2013, I reported that snow fell in Egypt…not normally a winter wonderland. Tom Harris, Executive Director of the International Climate Science Coalition, and Dr. Madhav Khandekar, a former Research Scientist with Environment Canada, offer compelling and scientifically sound analysis on global trends.

December 2013 and January 2014 were the third-coldest Decembers and Januaries in the past 30 years averaged over the contiguous 48 United States, with temperatures plummeting to −10°C in Atlanta and −26°C in Chicago. Residents of North East India struggled with unusually severe snow and −10°C temperatures without home heating. Snow and extreme cold also impacted the Kashmir Valley in India, where many elderly and very young people died of hypothermia. At the time of this writing, most of India is two to five degrees C colder than usual, a serious problem when 95% of all Indian homes lack central heating.

On the opposite end of the scientific sensibility scale, Cecilia Bitz, an atmospheric scientist from the University of Washington in Seattle, had to improvise a “global warming” explanation for the reason that the Antarctic ice floes are the furthest north they have been since satellite records began in 1979. She says its “heat transfer”.

I am sure Professor Jacobson is enjoying the “heat transfer” as he shovels.

In their article, Harris and Khandekar rightly point out that improper focus on “global warming” will prevent proper preparation to address the real climate challenges. The same is also true regarding California’s “megadrought”.

Victor Davis Hanson just published a great piece, The Scorching of California – How Green extremists made a bad drought worse, in which he details how adherence to “settled science” has left the Golden State brown in most spots — except in the progressive, urban centers where most of the environmental activists reside.

…If the drought does continue, vast tracts of west-side farmlands will turn to dust. California’s nearly $30 billion agricultural export industry—led by dairy, almond, and grape production—is in grave peril. Its collapse would crush the economic livelihood of the Central Valley, especially its Hispanic community. When the 5 million-acre west side goes dry, hundreds of thousands of people will lose their jobs in a part of the state where the average unemployment rate already hovers above 10 percent. Farmers will spend hundreds of millions of dollars to deepen their wells further and save what water they can. Everything they and their predecessors have known for a century will be threatened with extinction.

Water is to California as coal is to Kentucky—yet its use is being curtailed by those least affected, if affected at all, by the consequences of their advocacy. But environmentalists, who for 40 years worked to undermine the prudent expansion of the state’s water infrastructure, have a rendezvous with those consequences soon.

A recent study showed that more “global warming skeptics” knew more about climate than believers. So, who should sensible people and public policy planners believe — “heat transfer” and altered data, or what is actually being experienced in New York, California, and the rest of the world?

I’m sorry, but wasn’t the name changed to “Global Climate Disruption?” Really, it doesn’t matter what the weather is, it’s all our fault. Unless it’s nice. In which case, “Look! Our policies are working!”

As in all crises, it’s about money and power. And he who controls the microphone appears to control the sheep, err, people.

Well Herr Gruber did consider the people stupid to get past them with obamacare.

The major cause of Global Climate Change is…… grant money.

One of the 3 scariest things around – a liberal with a government grant.

That’s the manure that produces the false data, like a crop of poisonous mushrooms.

The real cause is Collectivism, which sees (rightly) the enormous potential for coercion in something termed “global”. It is the Collective’s wet dream. Plus, it so neatly offers them their perversion of religion as a huge bonus. What is the root of all evil? Why, American standards of living! The very planet screams in pain!

Read The Children’s Blizzard by David Laskin. it is a fine examination of the development of weather forecasting and the history of weather in the 1880s, both in the Great Plains and in New England. Our winters are a stroll on a Maui beach compared to that decade.

It became obvious that the grant-seeking Climate Alarmists were manipulating their data during the “Climategate” email leak scandal, yet the scam continues. There’s careers, and far too much public money, at stake for it to end.

Here is an example of how they do it.

Brazil has 2000 weather stations today. Two centuries ago they had 2. So, to model the weather researchers plug for the other 1998 stations. If one station in 1814 showed 80 degrees and one station showed 85 degress – they can use that as a basis.

2000 weather stations in a landmass of some 8 million square kilometers?

It’s plain from tree-ring records that California has been subject to ‘megadroughts’, some of them of 40-year duration, for centuries. This is nothing new.

It is amusing that the nobility with their well-manicured gardens around Stanford are so devoted to depriving those dumb farmers in the valley of water. What shall they live on? Let them eat cake?

Perhaps we’ll see a stampede of brown jacquerie pouring over the Altamont Pass to eat the rich environmentalists out of their million-dollar houses and homes in the PC suburbs on the Peninsula. But what a conflict this will raise among the far-left professoriate – who are the ‘haves’ in California. Eat US???? But… but… we’re on the right side of history!

We’ve had similar droughts here in California within the historical record. Within my own lifetime, we’ve had multi-year droughts in the 1960s, the late 1970s and from the late-1980s to early 1990s. Worst of all was a 30-year dry spell between 1910 and 1940, which was especially grim between 1916 and 1935. It was this history that led to the creation of the State Water Project in the 1950s – that was ended prematurely in the mid-70s (dams and reservoirs were canceled that would have been of great benefit today).

It is now abundantly clear that the global warming gig began as a way to effect the political changes and that global warming was a convenient bandwagon to ride. By now it should be clear to anyone who is not an ideologue that the gig is an outright lie.

The above comment by Noblesse Oblige says it all. The Global Warming myth has been a political lie all along.

Some of the warmers predictions. Via Wattsupwiththat.com
http://climatechangepredictions.org/

Woah woah woah. What’s this crap about this being a “named storm?” You do know that’s just marketing bulls**t by the Weather Channel, right?

No official agency in the US names winter storms. It’s something TWC invented a few years back to feed the hype train.

I’m disappointed to see you letting that slide. Don’t let them get away with that crap!

OUT: Global Warming
IN: Alien Abduction

Why do we say “the science is not settled” when global warming is not tied to any scientific fact.

“Greenhouse Gas” is an oxymoron. Greenhouses allow radiation and inhibit convection. Any gas that inhibits convection is by definition, not a gas.

CO2 tracks temperature (not vice-versa). More plants grow when it is warmer, and plants account for 95% of the Carbon Dioxide. Scientists have used that fact for decades to determine the temperature of the Earth thousands of years ago. You don’t want to be against science, do you?