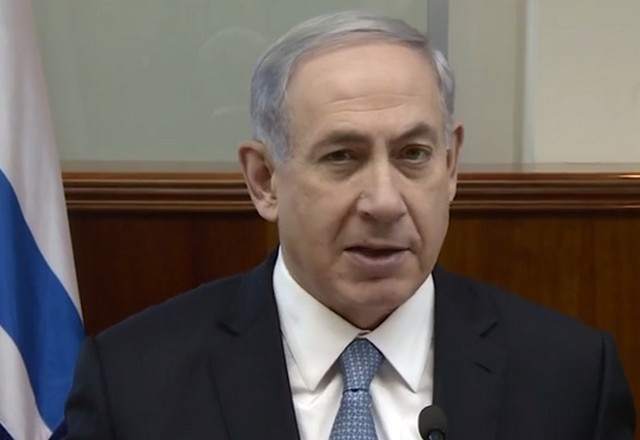 Obama knows he’s vulnerable on Iran, and Israeli Prime Minister Benjamin Netanyahu’s impending visit to the U.S. and Congressional address isn’t doing him any favors when it comes to gaining a vote of confidence from lawmakers and other world leaders.

The White House expects Netanyahu to hit back against its efforts to strike a nuclear deal with Iran—and they’re already rebutting what they anticipate Netanyahu will say:

In a briefing for reporters, senior administration officials contended that even an imperfect agreement that kept Iran’s nuclear efforts frozen for an extended period was preferable to a breakdown in talks that could allow the leadership in Tehran unfettered ability to produce enriched uranium and plutonium.

“The alternative to not having a deal is losing inspections,” said one senior official, who would not be quoted by name under conditions that the administration set for the briefing, “and an Iran ever closer to having the fissile material to manufacture a weapon.”

Since House Speaker John Boehner announced the invitation, reactions from Democrats and the White House have unraveled, from boycotts, to snubs, to outlandish statements like one from national security advisor Susan Rice, who said that the address would be “destructive” to the U.S. – Israel relationship.

This is nothing new. The tension began the moment Obama took control of the White House.

Within months of taking office, Obama irritated Israel when, in an address to the Arab world, he challenged the legitimacy of Jewish settlements on Palestinian-claimed land and cited the Holocaust as the justification for Israel’s existence, not any historical Jewish tie to the land.

The White House was furious when Netanyahu’s government defied Obama and announced plans to construct new housing units in East Jerusalem while Biden was visiting Israel in 2010. Additional housing plans that year upended U.S. efforts to restart peace talks between the Israelis and Palestinians.

The tension between Obama and Netanyahu was laid bare in an unusually public manner during an Oval Office meeting in 2011. In front of a crowd of journalists, the prime minister lectured Obama at length on Israel’s history and dismissed the president’s conditions for restarting peace talks.

Later that year, a microphone caught Obama telling his then-French counterpart in a private conversation that while he may be fed up with Netanyahu, “You are sick of him, but I have to work with him every day.”

Of course, the protestations and recriminations flowing from Obama’s faithful haven’t done much to temper buzz about the speech; in fact, they may be doing the exact opposite. Israelis and their allies are understandably wary of widening the rift between the US and Iran—but they’re even warier of a nuclear Iran. The Administration knows this, but is still pressing forward in an effort to discredit the Prime Minister just ahead of Israel’s upcoming elections:

The Administration also seems to think that manufacturing a crisis of relations might defeat Mr. Netanyahu in Israel’s elections next month. A similar crisis between then-Prime Minister Yitzhak Shamir and the George H.W. Bush Administration contributed to Shamir’s defeat in 1992.

That tactic may work again, since Israelis are naturally wary of becoming estranged from their most important ally. Then again, Israelis are even more wary of a nuclear Iran, and a recent poll by the Times of Israel found that 72% of Israelis “do not” trust Mr. Obama to ensure that Iran won’t get a bomb. Some 59% of Israelis also hold an unfavorable view of the U.S. President.

This suggests that Mr. Obama’s attempts to interfere in Israeli politics by personalizing his differences with the Prime Minister may backfire. The trashing of Mr. Netanyahu has done nothing but increase public interest in his speech, no matter how many Democrats boycott. Recent polling finds Americans overwhelmingly in favor of giving the Israeli leader a fair hearing in Congress.

This presents an interesting problem for Netanyahu, who won’t be able to say outright that the Obama Administration is working over the people of Israel in an attempt to appease an increasingly hostile Iran. This would be bad for diplomacy, and could alienate the minority of his voters who still hold at least a somewhat favorable view of Obama. His best bet will be to appeal to the 60 or so percent of voters who have lost faith in what Obama is doing in the Middle East by encouraging the President to take a hard line as opposed to agreeing to a weak deal that would still leave Iran nuclear-capable.

We’ll be covering the circus before, during, and after the address. Stay tuned for more updates!

“…senior administration officials contended that even an imperfect agreement that kept Iran’s nuclear efforts frozen for an extended period was preferable to a breakdown in talks that could allow the leadership in Tehran unfettered ability to produce enriched uranium and plutonium.”

First, who has ever seen a “perfect agreement”? So, per force, all agreements in the real world are “imperfect” agreements.

Second, was the Chamberlain agreement with the Nazis preferable to “unfettered” German bellicose designs? How would one tell the difference after the passage of time? Poland got exactly the same treatment it would without any “accord”.

Third, in what fantasy will Iran be “frozen for an extended period”? They have proven very adept at making agreements and artfully breaking them.

Forth, and this should be emphasized by everyone in the West, Iranian leaders are NOT like us. They are NOT EVEN LIKE Soviet leaders. They are MUCH more like the Imperial Japanese, and they are head-deep in a death cult. They will NOT be deterred by the Western nuclear arsenal. They will be VERY prone to use a nuclear weapon WHEN they obtain one via the fecklessness of the Obami.

This is the Charlie Brown and the football theory of international relations. Who would have thought we would be led by a cartoon character.

Don’t leave out Dilbert and Pogo.

“We have met the enemy and he is us.”

Your analogy doesn’t work. A cartoon character has more depth than the POTUS and his evil minons.

One must appreciate the unintended consequences.

President Obama’s crude foreign policy blustering doesn’t even approach childish schoolyard trash talk. Macho doesn’t work so well when it comes from unattributable sources. The attendant insecure whining only heightens the interest for an honest assessment of how wrong a path the President has chosen. Failure at the highest level always draws a huge crowd.

Bibi will have an audience.

Glad Bibi Netanyahu got obama’s goat! And, he hasn’t even started speaking to the Joint Session, yet.

Someday, we’ll hear about how obama slid down the banister in an attempt to get Netanyahu back into the Roosevelt Room. (Well? Back in 2009 obama really tried pulling a few!) When Netanyahu came for that visit obama handed him a piece a paper (with the “deal”) and then said he was going upstairs to have dinner with his family.

Gee, to have been a fly on the wall!

Bibi just walked out! (The front door. Not out back with the garbage.) Oh. And, someone on staff had to go upstairs to tell the president his guests left, no?

Here’s hoping for a “Let’s not get fooled again” theme.

Anyone remember when Bill Clinton sent Jimmy Carter to North Korea to bring home a “peace in our time” unenforceable agreement, where we spent decades paying them off while they pretended not to be continuing with their arms program?