Next Obamacare push will come via the pulpit

Next Obamacare push will come via the pulpit

“The body is a temple and it must be insured!” 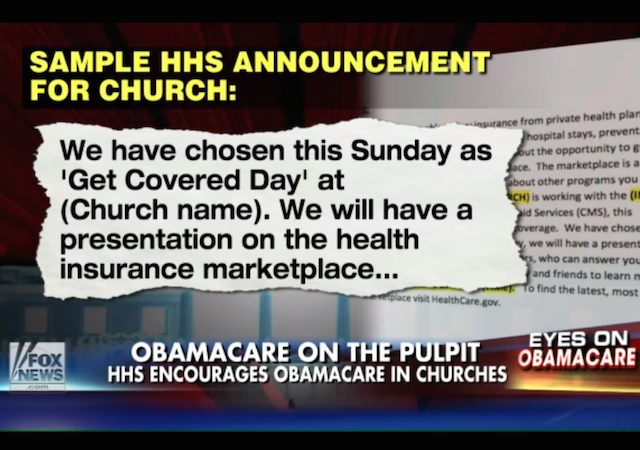 Obama Administration officials are feeling the heat from the downward spiral of its figurehead health care legislation, and they’re looking for allies in what is arguably the most unlikely place on Earth—the Church.

Unlikely indeed, considering religious organizations (and organizations run by religiously-minded entrepreneurs) have been engaged in an all-out war over Obamacare’s various mandates since before the thing was signed into law. Officials charged with making sure Americans enroll for coverage have always thought of religious organizations as outlets for promotion, but they’ve recently stepped up their game and started re-pushing pre-made educational materials to churches.

These materials are part of the “Second Sunday & Faith Weekend of Action Toolkit,” which is available on the website of the Department of Health and Human Services (HHS).

From the beginning, HHS has sought to develop partnerships with faith-based organizations to promote the Obamacare. This “toolkit” has been available since 2013. However, the details of these partnerships have largely escaped the attention of the national media. The Second Sunday & Faith Weekend of Action program encourages churches to use the second Sunday of each month during open enrollment to hold informational meetings and sign-up events.

Those overseeing the exchange in our nation’s capital took their promotion one step further—and co-opted the Good Word to make their point:

I don’t think I need to point out how disgusting this is.

Members of the clergy aren’t taking this lying down. Robert James Jeffress, Jr., pastor of the First Baptist Church in Dallas, Texas, recently spoke out against the proposed “partnership” between the government and the church to push Obamacare:

Let’s say it again: partnership between the church and the government. Isn’t this the very thing liberals freak out about when discussing abortion, or gay marriage, or “lobbying from the pulpit?”

Welcome to 2015, where literally nothing remains sacred.

Well, I guess it is only logical that the One who thinks he is the messiah, who has redefined marriage and sex, would ultimately expect Obamacare to be treated like a sacrament too by the church.

That’s Mahdi Obama to you, peasant!

Sure it isn’t Iman Obama? I have seen lots of people bow on carpets to him and give him money.

Oh, I’m certain that when this deranged narcissist gazes into a mirror the image looking back is that of the Madhi, the last muslim to rule the world in the years just prior to the Day of Judgement.

I can see the “incentive”…

“Publicize Obamacare… ahem, the “Affordable Care Act” on your Sunday services… or we will sick the IRS on the whole scum or you!” – enthusiastic Obama bureaucrat.

Separation of church and state!!

Oh, I forgot – that doesn’t apply when Democrats wish to use churches as a tool to further their own ends ~

“It isn’t wrong when we do it.” — The Democrats

“They told me if I voted for Romney, we’d see an unholy alliance of government power and the church, seeking to take my choices away about what I did with my own body, and putting tax dollars in church coffers. And, boy, were they RIGHT!”

To keep that meme alive — you know, being told to man down and accept the RINO ruination of proven conservative ideas that have been shown to work — I want to welcome their next great RINO hope for POTUS and support his run by sporting a bumper sticker that echo what he tells me he thinks of me …

What do you think? Should I do it?

I like it! What about a #hashtag? Does #JebDoesntNeedMe2016 work?

What kind of fairytale or profit do they follow? Pro-choice or selective policy reduces human life to a commodity. The Democrat Party is pro-choice on principle. Throw another baby on the barby, oh ye faithful.

Perhaps the ball of yarns is wound so tightly, that it is impossible to unwind without suffering a catastrophic anthropogenic global climate (and not just the carbon credit exchanges).

This is so wrong on so many levels. The Freedom of Religion the framers had in mind was keeping government out of religion, not keeping religion out of government.

The Black churches let Margaret Sanger and her Negro Project talk them into promoting the benefits of abortion. The best thing for Christian churches is to keep their eyes and hearts on Christ.

” The Freedom of Religion the framers had in mind was keeping government out of religion, not keeping religion out of government.”

Which religion are you referring to? Catholicism or Protestantism?

Must have meant Protestant since many of those blokes were anti-Catholic, which was reflected in laws they passed to discriminate against Catholics.

Precursors of liberals, they were for freedom of religion as long it was their religion.

0bama, thy holy Father and most erudite of scholars, black messiah and savior of the masses, omniscient and loving leader of the people, ruler of the IRS gods and God’s gift to man …. aw shucks, I can’t make up this crap any longer.

They ought to be ashamed of themselves – lying in church like that.

I’d be looking out for lightning strikes if my pastor told a whopper like that in God’s house!

Asking the Church to promote Obamacare? Oh, that’s just rich! Having shoved abortion-on-demand down our collective throats, refused to uphold Federal Law with regard to the Defense Of Marriage Act, used the IRS to intimidate Christian Conservative groups (“Please detail the content of your members’ prayers..”), smeared all living Christians with the ancient blood of the Crusades while absolving all Muslims of Islam’s ongoing violence, now in desperation HHS calls upon the faithful.

Jesus spoke truly: “Then he will say to those on his LEFT, ‘Depart from me, you who are cursed, into the eternal fire prepared for the devil and his angels’.”

This doesn’t make any sense. Open enrollment is over for the year. If this was part of ‘the plan’ they should have done it months ago. Typical.

It wouldn’t surprise me if they announced yet another illegal “extension” to the open enrollment period, like they did last year.

I think they did it.

But the news only started getting around last week or so.

Somebody should have changed the tense.

The enrollment period was over yesterday!

Some Democrats want to extend it.

Will they be doing this in the local mosque, as well?

How does government mandated healthcare fit in with sharia law?
If a member of a mosque doesn’t enroll, does the imam issue a fatwa?

Aren’t some exempt, such as the Amish and the muslim? They don’t believe in insurance.

Not a problem. But they still receive health care.

Yeah, I know she backed down, but where political speech from the pulpit could potentially place churches 501(c)(3) status in jeopardy, how the hell is it the government can impose upon churches to run what amounts to a government advertisement / public service announcement?

funny how the Leftards, who are always whining about “separation of church & state” go deaf dumb & blind when they want to use religion to their advantage…

imo, church goers should talk these things over with their pastor/priest. The very essence of Christian charity is free will giving. Having a minister promote taking part in government’s forced taking and redistributing looks evil.

The left hangs its holy hat on one verse in Acts “they had all things common”, which was a rather unique situation, but most importantly it was that group’s CHOICE. Old testament law “demanded” a tithe (afaik), but the collections in Acts were usually for a specific purpose, for Christians in need such as a famine, and was voluntary.

Any church that promotes (communist) government takeover of healthcare decisions and its forced redistributions should not call itself Christian, as far as I’m concerned.

The collectivist left has been working to infiltrate churches for a long time, and Obamacare literature might be that red line in the sand that needs to be drawn. At the very least, if pamphlets appear, be very curious and take them ALL. But ads will probably appear in the bulletins and online.

This is another part of the Alinsky “divide and conquer” plan. Pushing welfare/Obamacare in the church will tend to divide D’s and R’s. For every sign up, another angel gets his wings plucked.