Markus Kaarma, 30 years old, is not eligible for parole until 2035 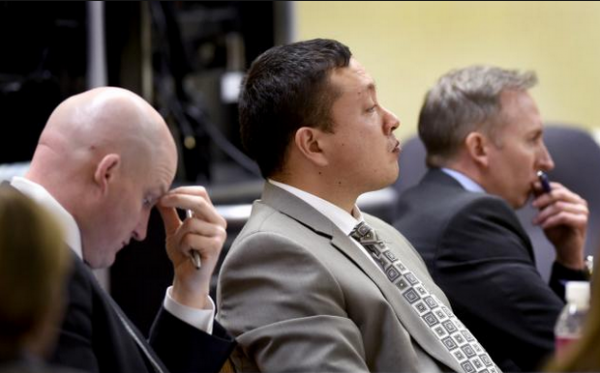 Markus Kaarma, the Montana man convicted last December of the murder of German exchange student Diren Dede was sentenced this week to 70 years in prison, as reported by the Dickinson Press.  Kaarma is 30 years old, and will not be eligible for parole until he is 50.

Kaarma was presented as having lured Dede into his garage with the explicit intention of using deadly force against him once Dede had been drawn into the trap.  Numerous witnesses testified to Kaarma expressing such intent in the days leading up to the killing.  Kaarma was angry that other items had previously been stolen from his garage, including some marijuana belonging to Kaarma.

Judge Ed McLean said Kaarma’s actions were alarming and stemmed in part from an earlier incident in which marijuana belonging to Kaarma was stolen.

“You weren’t killing to protect your family, you were angry someone stole your grass two weeks before. You were angry with the world,” the judge said.

Legal Insurrection covered the Kaarma case in considerable detail, including in these posts:

It seems pretty clear Kaarma deliberately set out to kill the next person who entered his garage without permission. Perhaps he should have considered putting in equal effort to secure his garage instead of setting up an elaborate trap to kill a future burglar.

So, people can legally leave the garage door, etc. open, and confront an intruder with an explicit attention to commit a crime (e.g. burglary), as long as we don’t possess an “explicit intention of using deadly force”? What qualifies as “bait”? Does it need to be a indispensable item (e.g. food, water, medicine, heat, shelter) to the survival of the intruder?

What sunk this guy was him running his mouth to the entire neighborhood telling them his plan.

In the immortal words of that font of wisdom Ron White; “You can’t fix stupid.”

That’s right. Without the prior statements to neighbors, he might never have been charged.

So, it was premeditated. Full stop. I thought there was a confrontation and a struggle. Would that change the verdict?

Doubtful, from my understanding, if I have been reading Andrew’s articles correctly a confrontation probably wouldn’t have changed anything, since he basically set up the confrontation by setting the trap.

Also, it probably didn’t help that he, from what I understand, he sneaked around to the front and basically just filled the garage with buckshot in a wide pattern.

Kaarma is a bitch.

My read of this guy and his wife has them being recreational killers.

If they had not been successfully prosecuted in this instance, they would have killed again.

I will say that I defiantly see some crazy in his eyes. How did the wife avoid getting charged?

Law enforcement hates competition …. only they can legally use bait [as in using prostitutes to entrap johns].

I’m curious as to how many times you will throw that inapposite BS against the walls (see what I did there?) in hopes it sticks.

First, it isn’t “entrapment” to arrest johns to approach what they think is a prostitute for criminal purposes.

It isn’t “entrapment” for a game warden to arrest a poacher who shots a mechanical deer.

You need to look up the term “entrapment”. It has a meaning.

Second, LEOs ARREST the johns. They don’t gun them down (or if they do, they are prosecuted…or risk prosecution).

Let’s discuss this for a moment. A usually honest guy wouldn’t approach an open garage door … but if there are an assortment of goodies in plain view, he just might be tempted. Is this entrapment?

A usually honest guy wouldn’t approach a female … but if she is seductively dressed, smiling, winking, and paying attention to the guy … well, isn’t this entrapment?

So Apples are comparable to Oranges in your world? There is no comparison that can be drawn between the 2 examples that you give.

Wally, if you’re fishing for legal assistance in fighting that latest solicitation charge of yours, don’t be so coy, just come right out and ask! Nobody here will judge you. Much. 😀

Forgive me but that is twice as funny because you’re female. Talk about leaving a mark; that one might leave a scar.

These were the idiots bragging about the trap right?

Sometimes I shake my head and just think, “who are these people?” Nothing in my garage is worth killing over. Nothing! That’s what I have insurance for. Oh, and security cameras. The two nearby Sheriff’s offices like to use their FB feeds to send criminals caught in the act viral. There’s always a disgruntled ex or former teacher or someone willing to step up and identify these mugs 🙂

Insurance is not free.

I am actually surprised he didn’t get more time.

I think the sentence was too harsh, considering the dead guy really was breaking in/walking in, whatever, and likely stole from the defendant before, even if it was an illegal substance.

Compared to sentences in other murder cases in which the victim was a complete innocent, such as an armed robbery or rape victim, that may only be twenty years and they’re out in eight or so, this was heavy.

He got a stupidity enhancement tacked on for running his mouth.

That may not be to far from the truth if they convicted him of conspiracy for planning the murder.

Many decades ago, the joke was to put a skunk in a suitcase and leave it where it could be stolen.

This I like, though it has to be a delicate operation to get the skunk….and if PETA ever found out, geez.

Sounds like a good way to catch those TSA skunks.

It wasn’t about marijuana or anything else stolen. It was about feeling invaded, but a reaction to feeling invaded so bad as to far out-bad the thievery. Nobody five-finger discounts my pot or my weed whacker without paying the ultimate price, he thought. ‘Twas EGO and his severely twisted sense of justice. I imagine a firearm was also involved, but that’s irrelevant – he meant to kill a thief.

How is this different than the show “To Catch a Predator”? Or the cops setting up a decoy deer along the highway to see if anyone shoots at it from their car? When the law bates people in, it’s okay. When a guy who has been robbed previously does it, it’s murder…

It’s different because the cops and Chris Matthews don’t set out with the specific intent of shooting and killing the suspects.

Hypothetical alternate “To Catch a Burglar” scenario: Markus Kaarma has been robbed, so he sets up a bait trap with a high-def, low-light camera and a garage door that locks automatically upon closing. When Diren Dede comes in, Kaarma sees it on the camera, pushes the button to close the door, and calls the cops, who come and arrest Dede. He or the cops release the video online, it goes viral, Dede gets charged, convicted, and deported, everyone’s happy (except Dede). In this scenario, the worst charge Kaarma could get is kidnapping or unlawful detainment, but more likely he’d get a big “Thank you” from the cops and his neighbors.

In real life, though, unlike the cops, CBS, and Chris Matthews, Markus Kaarma did not set out to catch a burglar; he set out to kill a burglar. There’s a subtle difference.