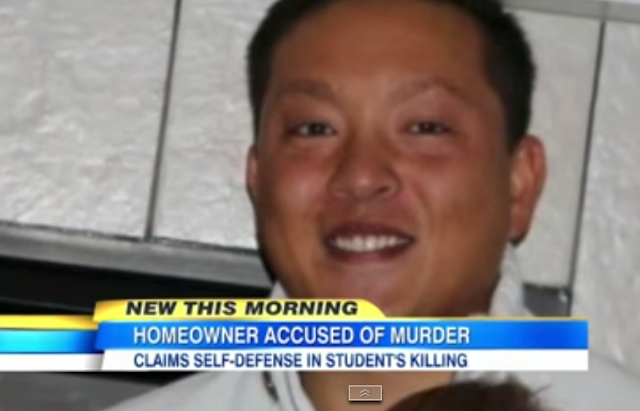 News station KPAX in Missoula MT reports that the jury today continues its deliberations on the fate of Markus Kaarma, the man being tried for murder for having shot and killed German college student Diren Dede the night of April 27, 2014.

The state argues that Kaarma and his common law wife Janelle Pflager (who has not been charged) deliberately left their garage door open to entice Dede to enter, as well as leaving in the garage a purse containing documented items that could later be identified as having been stolen from Kaarma.

At closing the prosecution appeared to concede that the investigation into the shooting was substantively flawed.  Their narrative of guilt also incorporated the approach of describing the 18-year-old Dede as an “unarmed child” who did not “deserve to die” for his effort to burglarize Kaarma.  As put by Missoula County Deputy Attorney Karla Painter:

Even if there was a subpar investigation, that does not give the defendant free range to execute an unarmed child.  Was [Dede] considering taking something that didn’t belong to him? Probably. Did he deserve to die for his transgressions? No.

Her colleague, Missoula County Deputy Attorney Andrew Paul, also sought to attack Kaarma’s claim of justification on the element of reasonableness, arguing that the homeowner acted precipitously in shooting Dede:

In 2-seconds he goes from standing at the front door, to coming around that corner and ‘boom-boom-boom-boom!’ Firing. How does he have time to perceive a threat?

The defense position has long been that Kaarma acted in lawful defense of himself, his common law wife and their 10-month-old son, and his home when he fired on Dede lurking inside the dark garage.  This defense narrative of innocence has also emphasized Kaarma’s high-level of fear and anxiety resulting from repeated prior burglaries of his home (each time while Kaarma, his wife, and child were inside the home) and the apparent inability of the local police to do much about it.  The neighborhood had, testimony revealed, suffered a rash of recent burglaries.

As defense counsel Paul Ryan put it in a statement released the month after the shooting:

Markus [Kaarma] felt his family was being targeted by burglars who had become more sophisticated and bolder with every new invasion.

Markus believed that the intruder posed an imminent threat to himself and his family.

Markus denies that he lured anyone into his garage. The family’s garage door was open for ventilation because Markus and Janelle smoke cigarettes in the garage and had done so before the tragedy. The purse alleged to be ‘bait’, was actually located in a dark corner of the unlit garage and not visible from the driveway,

At closing Ryan emphasized that it was Dede, not Kaarma, who made the fateful decision to break into the Kaarma’s garage that night, and that Kaarma’s only motivation was to protect his family and home:

[Dede] wasn’t lured into there. He made the move. That was one of the dangers he chose and one of the risks when he decided to burglarize this family. Now he’s in protection mode. This a father of a 10-month old. There’s no decision-making process that can go on where we have to be right or wrong. It’s ‘we’ve got to protect’.

I think it’s just so interesting what’s happening in the big picture of this,” Ryan continued, “And how much criticism a homeowner is getting in his decision on how he chose to defend his property.

On trial for deliberate homicide, Kaarma faces a minimum of 10 years in prison if the jury returns a guilty verdict on that charge.

Keep your eyes right here at Legal Insurrection for breaking news on a verdict.

For me, The baiting premise of logging the items in the purse tells me they had no intention to kill the perp. Why log it if he’s not coming out alive. Seems like more of a defence point than a prosecution.

and if it was attempted rape, the wife would have been guilty of dressing too hot.

I live in Missoula, the city this took place in. This article fails to mention that Kaarma and his wife told multiple people about their plans to bait someone into their garage and Kaarma told people he was waiting up at night to “shoot some f****** kids.”

If, as seems to be the case, there’s no baiting, what’s left? Self-defense against a guy already in your place of residence? Does a garage count? Attached? Detached?
If law enforcement can’t actually fix things, the choice is to do it yourself or let things remain unfixed.
As with the Wafer case near Detroit, increased levels of crime lead to increased feelings of DIY.
To be fair, this will probably end the local burglaries without much effort on the part of law enforcement. Particularly if the guy is acquitted.
The accused talked about baiting, but didn’t actually do anything what would look like baiting. Now what?

Our area had a full blown crime ring in motion until a home owner came home on one in progress. He held the kid a gun point, blocking his exit. The kid tried to rush past him, but the homeowner put a cap in his leg.

There were no more burglaries after that. The homeowner was not charged, though I’d like to buy him some ammo for his troubles.

The argument is that any incentive given to commit a crime, or seizure, is evidence of entrapment, that denies the victims a right to be secure in their persons, houses, papers, and effects. I wonder if the government will exploit this legal precedent to deny citizens their Fourth Amendment rights.

If a girl with a concealed weapon walks down a dark alley where rapes are known to have been committed, wearing a tight tube top, miniskirt and 5″ heels, and in the face of direct physical assault by one or more men who try to rape her, and she shoots, is she guilty of “baiting”?

It’s not my argument. As for the girl, I would advise that she consider that life is an exercise in risk management. When there is credible evidence of a latent threat, the prudent action is to mitigate risk through reduced exposure. So, she would be well-advised to change her dress, and to be armed in case her pragmatic effort fails to protect her.

Even if there was a subpar investigation, that does not give the defendant free range to execute an unarmed child. Was [Dede] considering taking something that didn’t belong to him? Probably. Did he deserve to die for his transgressions? No.

I wonder … if a woman shoots an unarmed man who attempts to rape her, would Missoula County Deputy Attorney Karla Painter say she should be convicted because “she baited her attacker with her hot bod” or “vigilante justice is wrong”?

Apologies, I just posited the same analogy above, before having read your comment.

I admit I haven’t followed the details of this case, but what if he planted the “bait” with the intent of making a citizen’s arrest, and trapped the guy in the garage. Being cornered, the thief decides to fight his way out and then gets shot in self-defense. That would seem to be a reasonable explanation. No idea if that’s what happened.

That’s a plausible explanation. It’s similar to what happened in Ferguson, when Brown overreacted to his arrest, forcing a violent escalation of the confrontation.

“repeated prior burglaries of his home (each time while Kaarma, his wife, and child were inside the home)”

I don’t recall reading this prevously, but that does make me more sympathetic.

The baiting thing was just really stupid, but I understand his frustration.

“In 2-seconds he goes from standing at the front door, to coming around that corner and ‘boom-boom-boom-boom!’ Firing. How does he have time to perceive a threat?”

Slightly off-topic, but isn’t this a variant of the question the family of Tamir Rice should be asking?

Archer.
I don’t know that it makes an open-and-shut case against self-defense, but this guy was not armed.
WRT Rice and the other toy gun shooting (Crawford?), the victims seemed to be armed.

If I find someone standing in my garage at night, I’m not playing 20 questions. HALT! DON’T MOVE! If those COMMANDS are not followed INSTANTLY, 45 caliber lead will arrive in a few nanoseconds. Nothing in my garage or house is worth YOUR life. So DON’T TRY IT!

The law of self defense doesn’t require that the aggressor you are defending yourself against be armed with a deadly weapon.

That said, if they do have a weapon it surely helps build your self defense case.

On a different subject – to you lawyers for the prosecution out there… if you ever call an 18 year old perp/victim a “child” I will have a hard time not laughing directly in your face. This approach will win no points with “me the jury.” It will result in an instant loss of your credibility, and perhaps be fatal to your case.

“Unarmed” is parroted in the media, like that’s the be-all and end-all of every self-defense claim.

Michael Brown was unarmed. Trayvon Martin was unarmed. Just because the suspect has no overt “weapon” doesn’t rule out self-defense. As some self-defense instructors will point out, in a contact-distance encounter, your gun ceases to be “your gun” and becomes “the gun”. It’s an inanimate object, usable by either party, and it won’t care who pulls the trigger.

I was just pointing out the “2-seconds” part of the statement, which may be a coincidence between the two cases. That’s “two seconds” between the armed party arriving on-scene, and shots fired. One suspect was in the middle of a B&E/burglary/trespassing, and the other was waving/pointing what looked like a gun, which in my neck of the woods is “menacing” or “brandishing” if it’s real-looking enough.

Did either deserve to die? Probably not, but they each did something extraordinarily stupid that carried harsher consequences than they imagined.

(Full disclosure: I don’t have all the facts of either case – personally I think Kaarma was baiting the suspect, which seriously undermines his self-defense claim – but there’s enough doubt on all sides to invite a healthy dose of criticism.)

Multiple burglaries in the neighborhood, also at that house – and the homeowner decided enough was enough.

The CRIMINAL came in to steal, he was shot facing the homeowner.

I wish people would refer to these dead intruders and gangbangers as the “deceased” not as “victim.” I understand it’s a reference to someone being a shooting victim, but first and foremost the deceased committed a crime directly associated with their demise.

Like the guy in Detroit, “Baad” Kaarma did WAY too much blabbing, along with his baby-momma.

He will go down for this, I’m thinking.

MEMORIZE THIS: I’m really distraught over the events that have just occurred, please understand that I’d rather make a statement later when I’m calm and collected.

[and that point of time is AFTER I have my attorney briefed and present.]

I could be mistaken, but some of his statements were made PRE-shooting to neighbors.

But they were damning.

Bullock arrived in Vietnam on May 18, 1969 and was assigned as a rifleman in 2nd Squad, 2nd Platoon, Fox Company, 2nd Battalion 5th Marines, 1st Marine Division. He was stationed at An Hoa Combat Base west of Hội An in Quang Nam Province. He was killed instantly by small arms fire on June 7, 1969, during a North Vietnamese Army night attack while making an ammunition run to resupply his beleaguered unit. He was 15 years old.