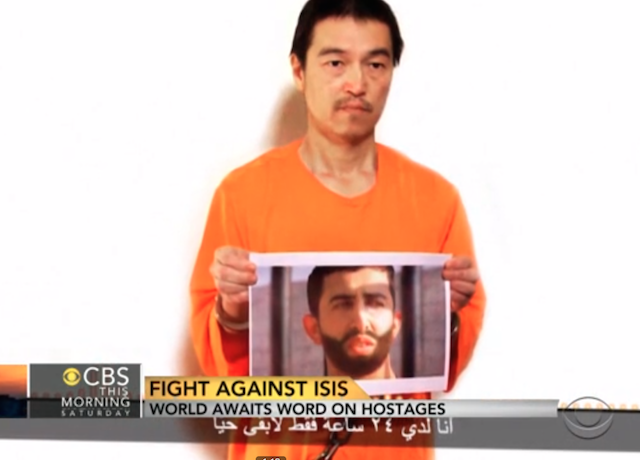 ISIS militants have reportedly released a video showing the beheading of Japanese journalist Kenji Goto. Goto is the second hostage to be executed this month after negotiations broke down between ISIS and the Japanese government.

“I feel indignation over this immoral and heinous act of terrorism,” Prime Minister Shinzo Abe told reporters after convening an emergency Cabinet meeting.

“When I think of the grief of his family, I am left speechless,” he said. “The government has been doing its utmost in responding to win his release, and we are filled with deep regret.”

He vowed that Japan will not give in to terrorism and will continue to provide humanitarian aid to countries fighting the Islamic State extremists.

The White House released a statement in which President Barack Obama also condemned “the heinous murder” and praised Goto’s reporting, saying he “courageously sought to convey the plight of the Syrian people to the outside world.”

Obama applauded Japan’s “steadfast commitment to advancing peace and prosperity in the Middle East and globally, including its generous assistance for innocent people affected by the conflicts in the region.”

According to Cabinet Secretary Yoshihide Suga, Japan will increase its humanitarian aid to the region, but will not offer its Self-Defense forces in the fight against ISIS, or join air raids.

The situation for Goto, and Jordanian fighter pilot and fellow hostage Muath al-Kaseasbeh, spiraled earlier this week as negotiations broke down between Jordan and ISIS rebels. According to the AP, the Muath’s fate is still unknown:

He [Cabinet Secretary Yoshihide Suga] said it would be “inappropriate” to comment on the status of the Jordanian pilot, Muath al-Kaseasbeh. He was captured in December when his F-16 crashed near the de facto capital of the Islamic State group, which controls about a third of both Syria and neighboring Iraq in a self-declared caliphate.

Jordan’s government spokesman, Mohammed al-Momani, also declined comment. Earlier this week, Jordan offered to free an al-Qaida prisoner for the pilot, but demanded and said it never got proof he was still alive.

Militants continue to demand the release of Sajida al-Rishawi, an al-Qaeda operative and attempted suicide bomber currently on death row in Jordan.

How many have to die before this administration’s blood lust is satisfied? Is there a pleasure that the Jugears Administration gets from permitting this to continue?

Could somebody please point out the line that marks the point where we can stop being patient? Just so us frustrated defender types can actually unleash our frustrations on the enemy.

everyone talks about a video yet nobody ever links to one. you can’t fight evil if you refuse to see it.

I’m not going to look at that. I’m a girl. However, I really wonder if anyone in this administration actually looks at these things, or is that something they foist on underlings, interns, or bureaucrats at the State Dept. Perhaps if Barry actually looked at one of these videos, his rhetoric might change. Wishful thinking.

I’m not going to look at it, either. However, I know very well that, as a matter of proof, it has to be posted.

The Daesh think that these videos make them look good. But I remember the Iraq mother who said, after Al-Qaeda bombed some kids that had mobbed some American soldiers, “If my son dies, I will drink Zarkawi’s blood.” Zarqawi was disowned and did not survive much longer, after that.

Now there is a Japanese mother, in addition to the (former) King of Saudi Arabia, the King of Jordan, the President of Egypt, and growing number of other Muslims, prominent and less so, who know these people due to their acts.

Just patiently biding our time while the bodies keep on dropping.

Ms. Miller, you are an attorney — forget the adverbs. A good brief, column, letter is not written it is re-written. Edit yourself, Amy.

But now that they’ve executed Kenji Goto, those negotiations are ended.

To me, this places a moral calling on Jordan to execute the al-Qaeda lady immediately, and ISIS’ malfeasance should be transmitted to the world.

As to the execution video posted above, every adult with an opinion on ISIS should watch it, and some with no opinion should also watch it. “Executed and beheaded” is a very sterile and clinical depiction of the act, and fails to underscore its barbarity. If you’re going to weigh in, you’d best be absolutely, painfully, sickeningly clear on what kind of “people” voluntarily associate with a group like ISIS.