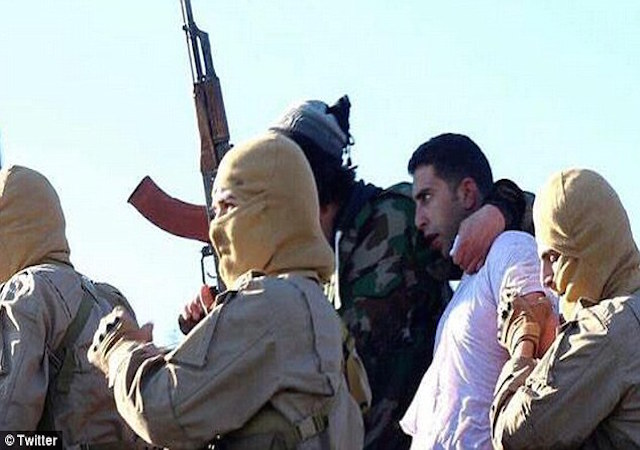 ISIS has gained another hostage.

The Jordanian military has confirmed that one of its pilots, 26 year-old First Lieutenant Muadh al-Kasasbeh, was shot down over Raqqa, Syria, and has been taken hostage.

Al-Kasasbeh was flying missions in the region as part of the US-led coalition force against ISIS. After he was taken prisoner, ISIS militants posted his name and picture on Twitter, along with shots of his military ID and a description of his survival pack, which was found near the crash site.

The F-16 was the first warplane lost since the US-led coalition began air strikes against Isis in Syria three months ago. The group said it had shot down the fighter jet with a heat-seeking missile. It was not immediately clear whether it had indeed been shot down or suffered a technical failure. Another image on social media showing the plane’s intact cockpit canopy suggested that the pilot might have ejected.

The Jordanian military issued a statement confirming the capture by Isis and saying it “holds the group and its supporters responsible for the safety of the pilot and his life”. It did not name him. “During a mission on Wednesday morning conducted by several Jordanian air force planes against hideouts of the IS terrorist organisation in the Raqqa region, one of the planes went down and the pilot was taken hostage,”, the Petra news agency quoted a source from the military’s general staff as saying. The Jordanian government went into emergency session to discuss its response.

This development is both horrific and problematic for the tiny country of Jordan, which shares borders with both Iraq and Syria and has been heavily criticized for its enthusiastic participation in the coalition force. Fortunately, King Abdullah recognizes the dangers of Islamic extremism, and is willing to get his military involved, even if he can’t publicize it.

Al-Kasasbeh’s father gave a quick statement to the press in hopes that it would reach his son’s kidnappers, saying, “I pray to God to instill compassion in your hearts.”

We’ll be praying as well.

UPDATE:
It appears as though the jet may not have been shot down, as was originally reported.

#BREAKING Jordan jet was not shot down by Islamic State group, says US military

Featured image via Twitter, republished by the Daily Mail.

I’m afraid that the king’s days may be numbered. Half his subjects don’t really like him, and this could provoke them to act out their dislike.

Do not count Jordan out. In 1970, the PLO thought it was ripe for the picking. Black September was named in remembrance of the thousands of Palestinians killed by the Jordanian armed forces.

Nothing is what it seems over there, he may have crashed on purpose.

I am afraid that the inevitable beheading video will be out shortly.