“Revolutionary Punishment Movement” may be Muslim Brotherhood on steroids. 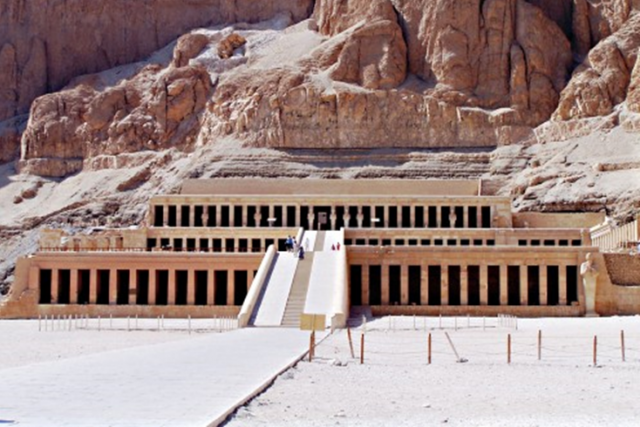 The Great Sphinx is safe from destruction and Egypt’s President Abdul Fattah al-Sisi is calling for a “Islamic Reformation”, so now should be a good time to visit the enchanting “Land of the Nile,” right?

Not so fast. A new group with ties to the Muslim Brotherhood has just declared holy war on foreigners:

An Islamist organization sympathetic to the Muslim Brotherhood is warning all foreigners and diplomats to flee Egypt by the end of February or face becoming “a target by the Revolutionary Punishment Movement,” according to a recent warning posted online by a Brotherhood-affiliated site and read live on television by one of its broadcast organs.

The statement issues a threat to “all foreign nationals,” “all foreign companies,” and all “embassy foreigners, diplomats, and ambassadors,” ordering them to leave Egypt by the end of the month or face violent attacks, according to an independent translation of the Arabic statement.

Foreign travelers also are warned to “cancel their trips” and told “they are not welcome to Egypt during these difficult days.”

The Al Jazeera Center for Studies has some background on these “insurgents,” who organized shortly before the 4th anniversary of the “Arab Spring” protests in Tahrir Square.

… Harakat al-Iqab al-Thawri (Revolutionary Punishment Movement) announced its presence on 24 January 2015, the day before the fourth anniversary of the revolution, claiming to have active cells in fifteen of Egypt’s twenty seven governorates. Despite the obvious difficulties in affirming the veracity of that claim, the wording of the announcement seemed free of the usual hallmarks of Islamist jihadi discourse, suggesting that this group has no jihadi leanings. However, the sheer magnitude of operations for which the group has claimed responsibility is astounding, since these occurred across the country, including Cairo, Alexandria, and cities along the Suez Canal.

It appears the group has undergone quite a transformation. The name alone does little to evoke the feeling that it’s related to a “religion of peace.”

The threat to Egyptian tourists is aimed at the heart of one of the few economic resources that the country possesses. In fact, tourism has been on a significant upswing since al-Sisi took office.

And while security for historic sites is probably ramping up in response to the call for jihad, keep in mind that the group al-Gamaa al-Islamiya massacred 58 tourists, including a 5-year-old girl, at the famous Temple of Hatshepsut in 1997. A video tribute reviews the terrifying details; militant Islamic terror tactics do not seem to have evolved much over time.

Could the “Revolutionary Punishment Group” wish to recreate something similar at another historic site? It’s not outside the realm of possibility.

These disturbing developments might partially explain why the State Department tried to cover-up a recent meeting with Muslim Brotherhood representatives:

The State Department admitted on Monday that it misled reporters about a recent delegation of Muslim Brotherhood leaders and allies who were hosted for a meeting with officials at Foggy Bottom.

State Department spokeswoman Jennifer Psaki claimed last week that the controversial delegation of key Brotherhood leaders and allies had been “organized and funded by Georgetown University.”

However, the university denied this is the case when reached by the Washington Free Beacon.

Psaki clarified her original comments made on Jan. 29 during a Monday meeting with reporters.

The meeting between the Brotherhood allies and the State Department sparked controversy in Washington and Cairo, where Egyptian government officials expressed anger at the Obama administration for hosting representatives of a group they consider to be terrorists.

It’s amazing how often the “most transparent administration in history” has to clarify something.

Egyptians have mixed feelings about all of President’s al-Sisi’s accomplishments during his nearly seven months in office, but they do note he has been at least moderately “transformative”:

He has launched the Suez Canal development project, the development of roads and bridges, he has established the scientists’ council, and has improved Egypt’s image globally assuring co-operation with the international community.

He also worked on reconciling different sections of Egyptian society.

He is a president who is trying to reform the country and he is doing a great job in facing all the challenges.

Al-Sisi has probably done more for world peace in 7 months than Obama has done in 6 years, so I’m sure that a Nobel Peace Prize is coming his way.

But in all seriousness, let’s hope that al-Sisi’s next seven months have not been made more difficult by our “transformative” leader.

I was at the Temple of Hatshepsut in 2000. All the roads to Luxor and the Valley of the Kings etc. were packed with armed guards. Buses had to travel in convoys and they had a set amount of time to cover their route or the cavalry was sent out.

If you look at the picture, the guides told us that most of the people were killed in the lower part of the temple pictured on the right.

They then told us that the locals heard the shooting and came running to the temple. The murderers figured they were coming to congratulate them, but the locals screamed that they had just ruined their livelihood and proceeded to tear the terrorists limb from limb. Don’t know if that was hyperbole, but it sounds true.

I wouldn’t go to Egypt now, but I am really glad that I went. It was sublime. The Pyramids at Giza, the temples at Luxor, the Valley of the Kings. Wonderful. To see the mask of King Tut a foot from my face, unforgettable. The only thing I wish that I could have done is take a Nile River cruise. That would be exquisite.

I was in Egypt 2007-2009. It wasn’t as bad as you describe in 2000. I took the Nile cruise three times — people kept coming to see us! There were still armed guards at all the tourist locations, at Christian churches, and to get into a shopping mall or tourist hotels you had to go through a metal detector and put your bag on a belt to be x-rayed. They’ve taken even more steps since to secure tourist sites.

Egyptians we know don’t really have mixed feelings about the al-Sisi regime. They are all in favor, both Muslims and Christians. They hated the Brotherhood year and don’t want to see the barbarity return.

I hope this group will not be able to pull off a large attack. Egypt’s economy hangs by a thread and they desperately need the tourist traffic.

“The lights are going out all over the Middle-east”.

And the poor of that area…already terribly poor…are more impoverished still. In the name of allah.

And the US is seen as an ally to these terrorists through deeds and words.

And who can blame them for seeing things that way.

That’s it. President Abdul Fattah should just resume his initial policy of serving capital punishment to these vermin.