In Syria, activists use children as props in “human cage” video. 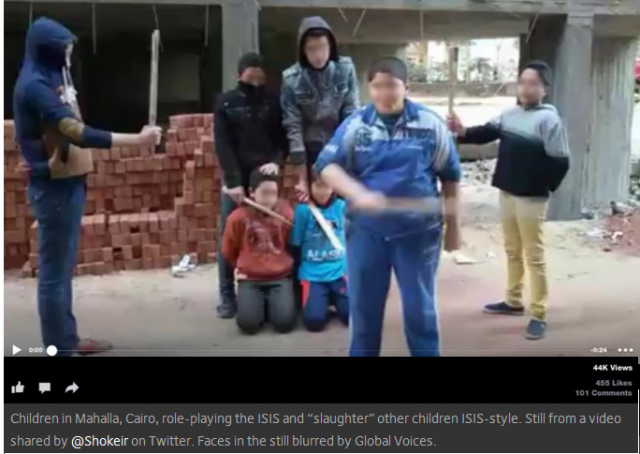 Sickening videos recently surfaced from ISIS showing the next generation of Islamic radicals being trained.

Elsewhere in regions impacted by the group’s atrocities, videos nearly as chilling are being uploaded.

From Egypt comes a clip of children at play. The game?

Children from Egypt’s El Mahalla El Kubra have been video-taped “slaughtering” other children ISIS-style while playing with wooden sticks. The video raises more questions than answers on the “merits” of sharing horrific videos detailing the terror group’s crimes, particularly with children.

The Al Qaeda off-shoot ISIS, which has come to control larges swathes of land in Iraq and Syria, has taken great pride in releasing highly-produced videos, showcasing how they behead their captives. Despite a cat and mouse chase to remove their graphic propaganda online, many continue to share the videos, unconcerned by the damage they could cause to viewers.

This El Mahalla El Kubra video may have been made after the militant group “ISIS in Libya” beheaded 21 Egyptian Coptic Christian workers who had been abducted in Libya more than a month ago. On February 15, the terrorists posted a gruesome and bloody video on YouTube that showed the beheading of the hostages, creating an uproar in Egypt, including the bombing of ISIS sites in Libya.

El Mahalla Al Kubra is an industrial and agricultural city in Egypt, located in the middle of the Nile Delta on the western bank of the Damietta branch, and is home to about half a million people.

Perhaps the most charitable interpretation of this “play” is that children are working out their fears, or attempting to comprehend the barbarity, make some sense of the world, and feel as if they have control over their lives.

However, that is not the only disturbing video featuring kids. In Syria, human rights activists are using children in anti-ISIS propaganda:

Dressed in orange jumpsuits, a group of young children are locked in a cage in a chilling recreation of the ISIS video showing a Jordanian pilot being burned alive.

Nearby, a man holds a flaming torch like the one used to set fire to Lt Moaz al-Kasasbeh in scenes that have horrified the world.

Thankfully, this was just a stunt by activists calling for Syrian President Bashar al-Assad’s alleged atrocities to be likened to those meted out by the jihadists. 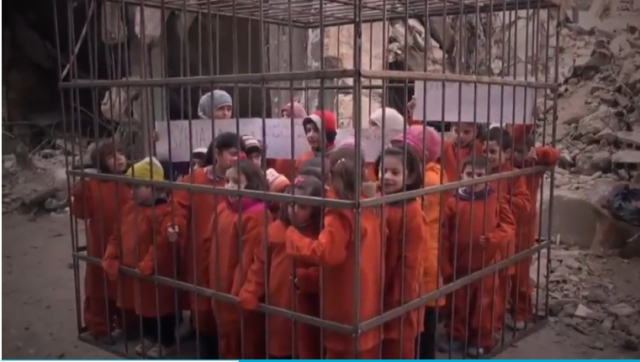 Egypt’s leader is doing more than launching a social media campaign. He is calling for an Arab Coalition against ISIS.

“The need for a unified Arab force is growing and becoming more pressing every day,” Egyptian President Abdel Fattah el-Sisi said in a televised speech Sunday.

El-Sisi said Jordan and the United Arab Emirates have offered military help as Egypt amplifies its battle against ISIS in neighboring Libya.

Indeed, inspired by King Abdullah, Jordan is already preparing for a larger role in the battle against ISIS.

Let’s hope that Sisi prevails. There has never been a better case for something needing to happen…for the children.

Geez, Leslie, I used to play pirates when I was a kid, too.

It’s one of those things about human nature; kids pick up what is most creeping out their parents, and then roll in it.

Note that the kids are pretty much boys, too. You’d think maybe there’s a difference in the way we’re wired…or something.

Yaknow, my friends and I played a lot of roles when I was a kid, and I can’t remember anybody playing “priest”, yet some of my friends grew up to be priests.

In islamic nations kids “play” by beheading people and shooting non-muslims. In America, kids are punished for pointing their finger like a gun.

In 20 to 30 years, these kids will meet on the battle fields. Which do you think will be more prepared to kill the enemy?

Think of the savings to taxpayers… Smart bombs? No way. We had it right in WWII.
A few well placed incendiary bombs will clean it out better than draino….

“Japs”, too. Remember when we could still see cartoons using that term?

I killed some Italians, too, but they usually just surrendered to me. Me and my smoking Thompson.

Next door neighbors were Japanese, well, she was, a war bride. Made great cookies and never dimed us if we broke a window or something. We let her off the hook.

Glad you covered my back with the domestic threats while I was killing space aliens. Thanks to me and my buddy Jimmy we are not speaking some dialect of Betelgeuseisan.

You were a brave, brave child. Promise us you were not, um, probed.

lol while your ancestors were holding detroit hostage too right?
LOL
🙂

Yes. I was in training in case we never rose out of poverty.

I was Dale Arden. I had to deal with Ming the Merciless, a ‘handsy’ Joe Biden type.
Flash, on the other hand…

MING. That BASTARD. Upon merely reading his name in your post my hand went involuntarily to my invisible ray gun holster.

Is your real name Happy Hapgood?

Are you accusing me of being a journalist????

In my piratical mode, I was a real bloodthirsty dude.

You WERE going to walk the plank.

Unless you were a six-year-old Maureen O’Hara.

That’s all? You must not have had one of those high-capacity clip thingies.

remember our own federal government says the greatest threat in America is … patriotic Americans with guns. We can’t have independent Americans running around freely, with weapons, not submissive to the lying lawless Obama administration. Our education system has already caged the minds of many, and they’ll be asked to inform on parents.

If the IRS probes of true the vote types, and disparate outcome arrests and reeducation of police departments, and redistribution and open borders, etc. … don’t bring these people under control, the iron cages are next. Free people are already driven toward the encampments of subjection to big brother.

But resistance is not yet futile. And Chuck Norris is on our side. Resist we much. 🙂