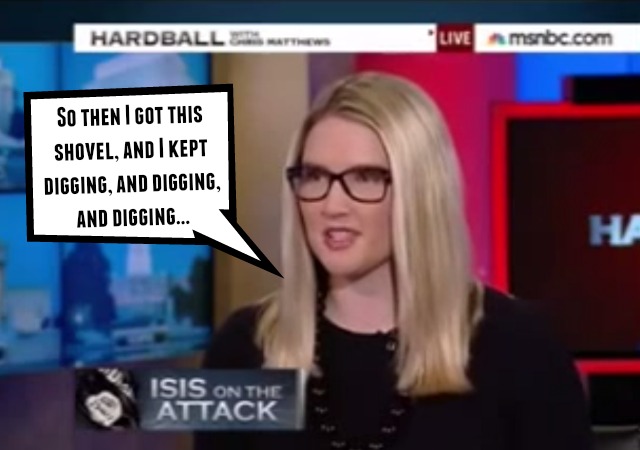 On Monday, State Department spokeswoman Marie Harf insisted that the only way we’ll be able to defeat ISIS is by ensuring the terrorists have jobs and opportunities—a statement that would be hilarious if it were on SNL and not an actual thing that Administration officials believe in real life.

Contrary to civilization upon civilization’s worth of wisdom, Harf also said, “we cannot win this war by killing” ISIS.

The internet, having seen the idiocy in action, responded accordingly. Ms. Harf responded by grabbing the biggest shovel she could find and dug with the fury of 1,000 waffling diplomats. She went so far as to quote… George W. Bush?

First, she blasted a link that touts the UN sanctions against ISIL—and we all know how effective sanctions are… Right, Iran?

UAE Amb to the US Yousef Al Otaiba writes in advance of CVE summit that "ISIL Can’t Be Beat on the Battlefield Alone" http://t.co/4MWMGT6PHh

Then, she tweeted where she lifted her talking points; a CNN article from 2008.

In what appears to be a rogue move, Harf completely disregarded the blanket, “always blame W” memo by using one of his many speeches to justify her stance. A speech that he gave in Mexico. In 2002.

And let's not forget George W Bush's comments on CVE: “We fight against poverty because hope is an answer to terror": http://t.co/Du68tsrjHd

GWB: We will challenge the poverty & hopelessness & lack of education & failed govts that too often allow conditions terrorists can seize

Logically, citing Colin Powell had to be the next move. Also from 2002.

1 more (of countless others): Colin Powell on fighting terrorism not just w/military means but by combatting poverty: http://t.co/37F3ePwvhZ

Point is that pols across spectrum, military cmdrs, & CT experts all agree strategy needs to address conditions that allow extremism to grow

$20 says she whipped out an old master’s thesis and began feverishly tweeting sources she’d cited, baffled as to how Informed America could possibly not understand that eradicating poverty is the best solution to ISIS’ willingness to terrorize an entire chunk of the globe.

The best (or worst, I suppose) part? Harf’s resume includes a Master’s in Foreign Affairs and a stint at the CIA. That’s right—she’s a “credible expert” on the Middle East. Yet rather than fight the War on Terror, Harf and her DOS/administration betters have decided the War on Other People’s Poverty is the place to plant our flag.

And they thought W was an imbecile.

So, those twin hot-beds of terrorist spawning…Bangladesh and Norte Korea…are two of Valley Girl’s examples?

See, this poor, stupid thing holds college degrees, but she would be one of the people the plastic wrappers on chicken reminds to be sure to remove said wrapper before baking.

It’s painful to watch this level of stupid at the highest levels of government.

Yes it’s very painful for those of us who knew that electing a no-show one-term Senator whose only prior “qualifications” involved Community Agitating would be a disaster.

I mean seriously, who could have POSSIBLY foreseen that he would be woefully inept as POTUS? Who could have possibly known that he would surround himself with inexperienced staff-lounge intellectuals with zero real-world experience? But we couldn’t have that discussion because of… wait for it…. RAYCISS!

At this point I halfway expect this administration’s press conferences to begin with the entry of a small clown car which does circles around the room before spilling out a crew that looks eerily similar to a SNL cast practicing for a skit.

But what I really wonder is this… are the people who voted for this moron embarrassed yet? Or are they so wrapped up in their progressive bubble that they don’t recognize the flaming stupidity and destructive behavior for what it is?

Paul: the scary part, as he continues to dismantle our country, is he enjoys a near 50% approval rating. So, to answer one of your questions: No, they are not ashamed they voted for him. They believe he is doing a splendid job.

That number is totally faked – upwards a great deal.

And who cares except me and you?

How the ObamaMedia Faked Obama’s Growth in the Polls

“….media polls (had) a 6-9 percent tilt toward a Democratic sample.

And what McLaughlin notes is that the rate of bias has increased throughout September to create the fake groundswell of support effect
….”

Hey…. at least she has a college degree while this guy, whose only claim to fame is governing a large state, didn’t even graduate from college.

Marie Harf for President. Yeah Marie. You go girl. Show them what your daddy’s money (or a massive student loan) bought you.

This is just a retread for foreign policy of one of the oldest and most debunked of all Collectivist lies…the one that holds that crime is the result of poverty.

Heather MacDonald has flushed that down the toilet of history, but it crawls back up at night like a sewer rat.

Here, it is so manifestly silly that we are left agast.

But poor, stupid Marie DOES have some support from poor, stupid Collectivists in general. They have always loved the delusion that you can explain vicious humans by simple bromides like “poverty”, a lack of education or a group hug.

And, here, Barracula has set the norm for evading eyes from the obvious source of this viciousness.

It’s like FDR refusing to acknowledge the nature of Imperial Japan as the U.S. fought them in the Pacific. Which is too bizarre to contemplate.

I might be mistaken, but weren’t a good number of the 9/11 terrorist essentially rich kids? If so, that kind of blows Ms. Barf’s little theory ~

Yes. As was Osama bin Laden. But don’t harsh the narrative, mkay?

Zippy only has a 3% approval rating. Remember 47% is the Free S&#^ Army. Of course they’re going to approve of his performance. What else are they going to do, go to work?!? Crazy talk!

Members of the Free Stuff Army may be referred to as “Guinea Gimme Pigs”.

Oh please, our military (of which I was once a member) was in Afghanistan for over a decade and couldn’t decisively defeat the poorly-armed Taliban.

Now you suggest the same type of military action can wipe out ISIS?

Oh, please, your stupid self.

On Okinawa, how long did it take to “decisively defeat” a very well led and equipped force of fanatical troops?

What was the difference? Jobs? I suggest you get your head out your butt.

So? I was USN. Doesn’t make me an expert.

But, from what I’ve been hearing and reading, the biggest problem was the ROE.

I’m going to ‘splain some stuff to you, and it may sting a little, but think of it as a learning opportunity and grow from it.

A standing army consists of men and equipment with the will to fight and a command and control structure capable of directing the fight, along with the control of territory from which they can stage and rally. In that a standing army controls territory, it is vulnerable to the loss of territory. This is the story of most of warfare throughout human history.

Without territory, there is only insurrection. When the Taliban was defeated militarily, it became an insurrection, blending into the native population, into vast tracts of strategically worthless ground, and into sympathetic areas of Pakistan. The Taliban military was defeated, just as the Iraqi military was defeated. The latter no longer exists in its original form, and the former may control a village or town, but melts away in the face of concentrated power, as it must. Its success depends on not offering the enemy a significant, defeatable target.

IS is different, in that their strategy, the establishment of a “caliphate”, requires them to take and hold territory. The more territory they control, the more powerful they appear to be. However, that need to control territory makes them vulnerable. Can they, like Al Qaeda, transform into an insurgency of international significance once they are militarily defeated? Of course they can, but they will no longer be able to credibly portray themselves as the caliphate.

So IS is fundamentally different from the various, stubborn insurrectionary forces that plague the Middle East, and from whom so much of IS’s manpower has been drawn. They are defeatable, and once defeated, they will no longer be “IS” anymore. That doesn’t stop them from being on their merry beheading way, but it does stop them from besieging cities and waging traditional warfare.

Sigh. There was a time when a Masters or PhD degree actually meant something.

Harf can join Melissa Harris-Perry (PhD) on the “How on earth did these people get advanced degrees?” list. Is it that easy now?

It takes a lot of education to get that ignorant. There is a big difference between smart or educated and wise. So far as I know there is no “Wise Studies” major offered at any university. Maybe they could squeeze in a course or two between Lithuanian Lesbian Literature and Normative Genderism.

This is why I’m not one of those Amys who “wrinkles my nose” at those without advanced degrees.

Let’s not sell advanced degrees short. I bought my Masters fair and square.

A call for a new war on poverty? Oh, because it has worked so well here for the last 50+ years?

Actually she is correct. The is a much more nuanced issue than just dropping bombs.

Obviously many of these “militants” had issues with early potty training and most of them, at Jihad and Ballet school never viewed themselves as special snowflakes. Actually, many do not even know what a snowflake is in spite of their obsession with wearing ski masks.

It is difficult to watch these mental giants and their ‘magical’ thinking.

If this child keeps it up her name is going to get culturally drafted as a descriptive for ignorant, inane, and naive speech:

“What did the senator say about the allegations?”

Oh, he totally harfed it.

“What are you going to do when they start asking questions?”

Well, I guess Ill just have to harf it and hope for the best.

Excellent, Henry. I’m still laughing. Of course, Harfing also sounds like something the cat does when trying to expel a hairball. Works both ways.

Thank you. I live on a river, by the way.

Great minds and all that.

Wow, that didn’t take long, lol. I swear I did not see that first. Credit me not – Harf herself begged for it.

“Did you hear what Obama said about all his foreign policy successes? It was harftastic!”

The English girl at work made a quip about this that really only works if you can hear the accent, but the punchline was “harf-arsed”.

bush was an idiot re: islam and powell has always been a suckup racist.

Marie Harf is the epitome of the blonde jokes.

Tell me again. Between Harf and Psaki, who’s Lavern and who’s Shirley?

I just don’t understand what she or anybody else is saying, It’s just too nuanced for we of the Gruber set.