“These same students who vote Democrat Party line” complain when it hits their pocketbooks. 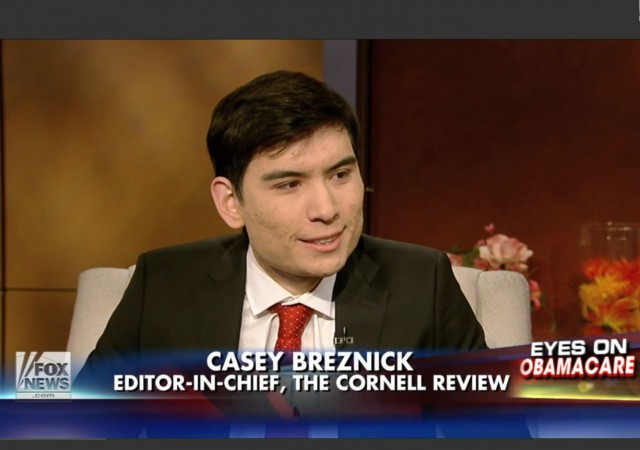 Casey Breznick, Editor in Chief of the conservative Cornell Review and contributor to Legal Insurrection, has been covering the dispute at Cornell University over a mandatory health care fee that is eerily similar to the Obamacare mandate penalty.

Pay if you purchase it, pay if you don’t. Where have we heard that before?

Casey almost single handedly has taken this issue to national attention through The Cornell Review, garnering coverage at The College Fix, Campus Reform, Red Alert Politics, Fox News online, The Blaze and throughout the Twittersphere, at the #FightTheFee hashtag.

@FightTheFee we were just on Fox News talking about #FightTheFee. Told you we'd get you national.

This morning Casey was in studio at Fox & Friends for a segment on the dispute. He seems like a natural to me, bringing his fearless style onto a big stage.

Just one thing. I told Casey to make sure he worked in a shout out to Legal Insurrection, but under the bright lights and time pressure of national television he didn’t manage it. Kid’s still got some things to learn.

The conservative kid did a good job.

So, some left-wing diaper dandies learned what the word ‘free’ means when uttered by the government.

Also… I don’t think you can call Mr. Breznick ‘kid’ any more.

We have to break the spirit of these kids now, mind trick them into working hard to pay old debts.

Then in ten years as that generation finds out we adults ran up $100 Trillion in unfunded liabilities on their kiddie credit cards, they’ll have no will to fight us and will pay pay pay. That commie college crap will finally pay off.

$70 in old debt … ha ha ha … wait till we as octogenarians are taking 40% of your paycheck for sex changes, marijuana and psychotherapy. “I’m 80, greedy, and I VOTE”

Illinois has only $100B in mostly unfunded obligations for early retired public employees, but the national situation is even more bleak. Maybe Obama will just mint 100 individual trillion dollar coins, and all problems will be solved. Thanks Obama. /sarc

Great job, Casey. Have these liberal students developed talking points yet to cover their hypocrisy? You know, that this is totally different from Obamacare.

Most say “the fee and the Obamacare tax are not alike.” Others will actually attempt to explain the distinction by referring to the fee as a “regressive tax” that redistributes wealth from the poorer students to the wealthier ones. I’ll let you dissect that argument by yourself.

But a national redistribution scheme is supposed to reduce individual liability. Why does it feel that reform without actual reform feels like negative progress?

From a press release issued in October, 2014 discussing the investment performance of the endowment, I see that the endowment is now about $6.2 billion and it recorded gains of $533 million on Long Term Investments. Of that, $311 million was paid to the university. If I’m reading it right, that leaves $222 million of last year’s investment gains to compound and grow in the endowment.

It would seem to me the university could just slice off another $5 million from the investment gains to pay for the medical insurance rather than extort another $350 fee from students. And not touch the principle amount of the endowment.

Or here’s another angle.

The press release indicates that the $311 million payout to the university is about 10% of Cornell’s revenue. So the annual budget is about $3.1 billion. The $5.3 million they expect to extort by increasing the fees is only about 0.17% of the annual budget. Any administrator who can’t squeeze 0.17% out of his operating budget (insurance, maintenance, supplies, and deferred capital expenditures) doesn’t deserve to be an administrator.

All of that is hard. The easy thing is to extort more money from you. They’ve got you by the ‘nads. What are you going to do, quit Cornell and go to Ithaca College or SUNY Binghamton? No chance. The average lifetime earnings of a Cornell graduate is probably a couple of million more over a career than the average earnings of a grad from those colleges. You’ll pay. And they know you’ll pay.

Sorry, but the administration is into empire building, not cutting expenses. All you can do about it is complain before you write the extortion check.

Your instincts are good, but I suspect you’re not hunting in quite the right direction.

Endowments are largely earmarked, and college administrators don’t like that at all. Therefore tuition, however it gets paid or laundered from an endowment gift, is golden, it can be spent any way they want.

Anyone want to bet the money from this fee would be similarly unrestricted?