Part of group seeking to hijack Ferguson and #BlackLivesMatter protests into anti-Israel crusade.

Anti-Israel activists have been attempting to hijack the Ferguson, Eric Garner and #BlackLivesMatter protests since early August, just after Michael Brown was killed.

I documented the infiltration and hijacking in a series of posts and an Op-Ed in The NY Post:

This is all part of a larger effort, particularly on U.S. campuses, to use “intersectional” theory to tie domestic race issues into Palestinian complaints about Israel, among other ways, through exaggeration and in some cases fabrication of alleged Israeli training of U.S. police. That way, any use of excessive force by a U.S. policeman is cause for anti-Israel activists to blame Israel and try to stoke hatred of Israel in domestic communities.

It’s a sick tactic, but it is one deeply ingrained in the anti-Israel movement in the U.S., which has sought to foment and exploit racial tensions long before Ferguson.

One of the groups spearheading the attempt to co-opt the #BlackLivesMatter movement is Dream Defenders, which carries a Tides Foundation logo on its website. The Tides Foundation is a major funder of left-wing activist groups, including groups exploiting the Ferguson riots and conflict.

I’ll have more on its efforts in the future, but for now it’s worth focusing on a trip the group organized to tie Ferguson into the Palestinian dispute.  The #DDPalestine hashtag is used for the event.

The group produced a video (embedded at bottom of post) of a “flash mob” it organized in Nazareth in Israel (which they referred to as being in “Palestine”):

On a historic trip to Palestine, freedom fighters from Los Angeles, Miami, Chicago, New York, Ferguson, and Atlanta were able to witness firsthand the effects of Israeli apartheid and occupation, and to learn from the people who are actively resisting on the front lines.

In Nazareth, the delegates decided to do a solidarity demonstration as a call for support of the Boycott, Divestment, and Sanctions (BDS) campaign that was called for by Palestinian civil society in 2005.

It wasn’t much of a flash mob — more like a dozen or so U.S. activists forming a circle and giving speeches as a very few onlookers watched. 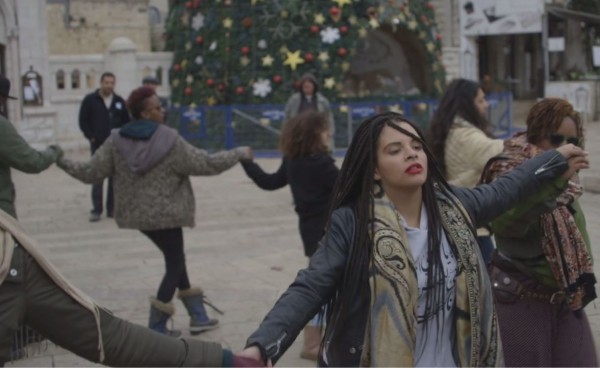 Nonetheless, the flash mob and the trip are being trumpeted on anti-Israel websites like Mondoweiss and Electronic Intifada as a big breakthrough in the struggle to connect domestic racial tensions to the Palestinians struggle to destroy Israel.  The group met with, among others, Omar Barghouti, a founder of the international anti-Israel boycott movement.

It’s a good example of how the anti-Israel propaganda machine works: Take a small gathering of activists, a professional videographer, and make a non-event seem like a huge victory over Israel.

The trip also was written up in Ebony Magazine by recently graduated Stanford University student and Students for Justice in Palestine activist Kristian Davis Baily, who has been arguing the case for Why Black People Must Stand With Palestine.

Among the attendees on the trip was Marc Lamont Hill, TV commentator and professor. His Instagram account has photos from the trip. 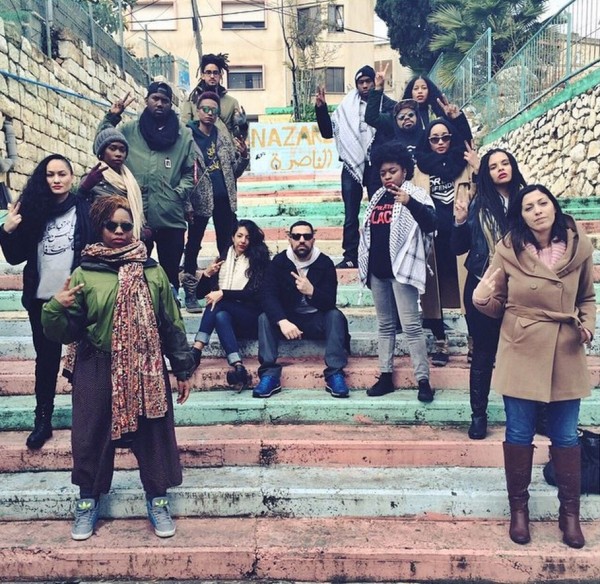 I didn’t know a lot about the specifics of Hill’s politics on Israel, though I knew he was hostile to Israel over the summer Gaza conflict.

I didn’t realize how far gone he was. Lamont Hill’s appearance in the Dream Defenders video, which he has tweeted , tells me he has completely ingested the anti-Israel Kool-Aid:

People continue to dream and fight for freedom

From Ferguson to Palestine the struggle for freedom continues

Solidarity Demonstration in Nazareth : Ferguson to Palestine from Dream Defenders on Vimeo.

.@marclamonthill U gave speech in Nazareth in ISRAEL, and BDS leaders like Barghouti consider all Israel occupied – http://t.co/kdwS8vm27L

@LegInsurrection Having a critical stance on Israel doesn't make one anti-semitic. We can disagree without being racist.

@LegInsurrection I'm sorry. I thought I saw that in your twitter feed. Am I mistaken?

@LegInsurrection my apologies. I was reading quickly and thought it came from your account.

So, is the logic here also that if the victims of the Charlie Hebido shooting were to have put up their hands and said “Don’t Shoot” they would still be alive today?

Horrible in the extreme, the fight against this type of hatred and its multiple spin-offs such as this, is becoming the defining struggle of our era. And the abuse of “free speech” to perpetuate lies and defamation is disgusting.

Hill is a typical loser who has a forum because of affirmative action and nothing more. He knows nothing more than the liberal talking points. Unfortunately, institution of higher learning are infested and infect with people just like Hill.

Hill is one of the dumbest people on television. You can’t listen to him without losing a few IQ points.

Hill was the boob who had the madman Jammah Caaahter on TV to yuk at the notion that Jews might be safer in Israel than France.

If Obama had a son……

Why am I not surprised by this?

Dream Defenders of…”Dreams from My Father,” NOT of MLK.

It is so cute how those kids are just slouching there, making the sign of the bunny ears with their fingers.

All you have to do is remember the Trayvon Martin and the Mike Brown incidents to understand that reality to this crowd is what they perceive it to be and not what it truly is. They have gotten away with making stuff up and then going with it for so long that it is the norm. Just look at obama and how his speeches are full of lies or half truths and he gets away with it. The odious O’Reilly used to have him on his show about once a month but Hill is so toxic and stupid that even O’Reilly had to drop him.

Ignoramuses on parade. All that’s missing are the giant floats. (Perhaps they could attached strings to Michelle Obama and inflate her.)

And no giant papier-mache puppet heads. What kind of protest is that?

I guess this merger of the grievance industry’s major firms is meant to create synergy and greater economies of tale; however, I think a wide moat is actually created. And this moat keeps them protected from any competition with reality.

Professor, now that you’re Twitter pals with Marc Lamont Hill, I seriously suggest you tweet him a challenge with the following LI link. If he argues in good faith, he should accept the challenge. The preacher/activist in Phoenix did, and he admitted it changed his thinking. I have to give him a lot of credit for that.

Further evidence of the truth of Blair’s Law:

“the ongoing process by which the world’s multiple idiocies are becoming one giant, useless force.”

It’s nice to know that the Left has no shortage of useful idiots always eager to jump on the bandwagon of the latest “cause” du jour, steeping themselves in ignorance, demagoguery, intellectual laziness and fallacious moral equivalence.

As typical of the Left, Hill protests he isn’t antisemitic or racist, when you never accused him of either, or even used the words. You said he is anti-Israel, or sounds it, which is perfectly accurate and which he did not deny.

There is a great Parting on the Left. The old liberal Democrats are dying out, the ones who liked social programs and taxing and spending but still supported Israel and opposed communism, people like Scoop Jackson and Abe Rosenthal and Moynihan and Dershowitz. What remains are what were the “New Left” in the ’60s, which preaches against Israel and considers communism no worse than equivalent to capitalism.

So Hill is just doing what he always does: follow the far leftist line, with a heapin’ helpin’ of race card thrown in. That’s his schtick. His wheel house. He’s a one trick pony, predictable as Obama playing golf and insulting opponents.

I will never forget Hill’s insane comment back when there were lots of people giving their representatives hell over ObamaCare. Hill stated that they were racists because they were white and alive during the Jim Crow days and that’s why they opposed ObamaCare. I was pissed at O’Reilly for not confronting him over his racist statement.