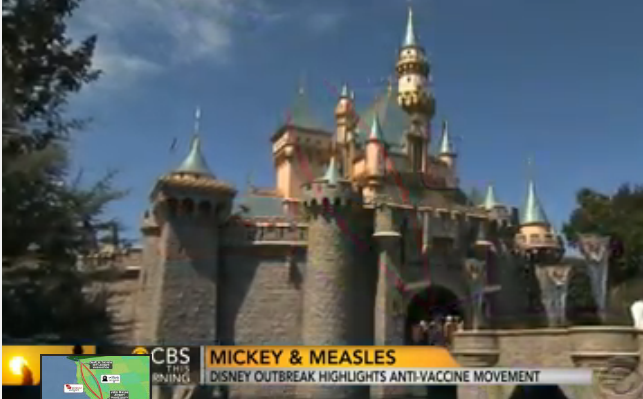 Since I last reported on the Disneyland Measles Outbreak, the number of infected people in California has expanded to 68 and has prompted a warning from a state official.

It’s really difficult to tell now when the last day of exposure might be,” said Dr. Gil Chavez, deputy director of the state’s Center for Infectious Diseases. “For the time being, if you are not vaccinated or if you have an infant who is too young to be vaccinated, you should avoid going to Disneyland.”

In all, 59 measles cases have been confirmed statewide, including 13 in San Diego County. Disneyland is associated with 41 of those patients, including five of the park’s employees.

Disneyland did not respond directly to the Wednesday recommendation from public-health officials. It referred journalists to a recent statement made by Dr. Pamela Hymel, the park’s chief medical officer, that said Disney was notified of the outbreak on Jan. 7.

The company has offered vaccinations and immunity tests to its workers.

“Cast members who may have come in contact with those who were positive are being tested for the virus. While awaiting results, they have been put on paid leave until medically cleared,” Hymel said.

I was mulling the idea of taking advantage of the situation, as my family is up-to-date on its vaccinations. However, concerns are increasing about the number of vaccinated individuals becoming ill with the disease.

Some medical experts have also expressed concern about the five patients who contracted measles despite being fully vaccinated.

Their cases point to a lesser-known aspect of the measles vaccine: That even those who get the shots have a small risk of getting sick, especially older people who were immunized in the 1960s, ’70s and ’80s.

Before 1989, federal guidelines recommended one dose of the measles vaccine. But after a major outbreak that began that year, leaving 55,000 sick and about 120 people dead nationwide, including 75 in California, officials called for a second dose.

Patients who get both doses are far better protected than those who only got one as a baby.

“I would say anybody who doesn’t know they’ve had two doses should get a dose of vaccine,” said Dr. James Cherry, a UCLA research professor and primary editor of the Textbook of Pediatric Infectious Diseases. Getting a third dose is also safe, he said.

Despite the fact some anti-vaccine experts are minimizing the risks associated with contracting the disease, Tara C. Smith, an associate professor of epidemiology at Kent State University, reviews why measles should not be immediately dismissed as a “benign” disease.

We had antibiotics for secondary infections, such as pneumonia, that settle in to measles-infected lungs — and fewer antibiotic-resistant bacterial pathogens than we do in 2015. Measles-associated pneumonia isn’t easy to treat if it’s caused by a “superbug,” and we’ve not had to deal with a huge measles outbreak in the age of methicillin-resistant Staphylococcus aureus, or MRSA, and other drug-resistant bacteria.

… Overall, our vaccination rate with MMR in the United States remains high: at or close to 90 percent by age 3 and about 95 percent by kindergarten. However, national statistics obscure local trends. Those 5 percent who are unvaccinated aren’t randomly distributed throughout the country. Instead, they tend to cluster in location, with many unvaccinated children living in close proximity to others, creating anti-vaccine communities with high susceptibility to measles and other vaccine-preventable diseases.

This is where we see explosive outbreaks, such as the 2014 measles outbreak in Ohio’s Amish community.

Nutrition and sanitation are no panacea for measles and no substitute for measles vaccination. Living in the United States does not magically protect you from dying from measles or other infectious diseases. Being generally healthy alone is not a guarantee that you won’t end up hospitalized from a measles infection.

California hospitals are preparing for an influx of measles infections, and since it was close to “eliminated” in 2000, healthcare professionals are now receiving training on how to recognize the illness and what to do with patients who show up in clinics or emergency rooms with suspicious symptoms.

What is the big deal? The only measles vaccine available when I grew up was to contract it. Happened to most children, nobody went to the hospital, you just stayed home from school for 4-5 days
I had them all growing up, measles, mumps and chicken pox.

Uhh, because we have a perfectly safe and effective way of keeping people from having to actually contract the disease? Yea, sounds right to me.

One of my aunts contracted a mild case of measles while she was pregnant, and had damaged baby. He just had his 50th birthday. He has been institutionalized for decades, and absolutely cannot function on his own.

As far as I am concerned, any pregnant woman who contracts this disease should sue the living hell out of the local parents who refused to vaccinate their kids, and brought this disease to her and her child.

Yeah, because we wouldn’t want to sue the millions of illegsls, would we?

It’s generally German measles that can cause mental retardation in unborn children, not regular measles. There may be other health concerns for pregnant women vis-a-vis measles, but retardation is not one of them ~

Well, yeah, Jesse. Must have been just before you went out hunting for “man!”

So you had them and survived. Congratulations. Others did not. Now that we are able to protect children from these diseases, parents who chooses not to, for no good reason, are negligent and should lose custody of their children.

I was 7 y/o in 1961 when I got the measles — 14 days isolated in my darkened bedroom – fever, rash and the doctor making home visits to check on me. Luckily, I had no complications.

It is still a vivid memory.

In all seriousness, a pox on anti-vaxxers.

And it could have been much worse. Not every child survived measles. Or chicken pox, for that matter. I know someone whose daughter died of it.

“the number of vaccinated individuals becoming ill with the disease.”

This is why “herd immunity” is important.

And that’s why the military routinely vaccinates all new recruits.

Ventura – I know of no one who actually had the red measles who were sick only 4-5 days = the fever alone lasts 3-4 days. Uncomplicated measles can be cared for at home but measles can lead to pneumonia or bronchitus.

Seems to me that it would be simpler and cheaper to avoid Disney Land. The fact is that people refusing to vaccinate are a tiny fraction of the population. Compared to unvaccinated immigrants they are insignifican. The fact is that today’s vaccines are not as effective as those 20 plus years ago. Blaming the anti vaccination people is just distraction so we avoid the real issues.

Wrong. Mexico has a higher vaccination rate than the USA.

The thing about vaccines (as opposed to acquiring immunity through contracting the disease) is that it gives people a false sense of security, believing themselves to have lifelong immunity when this is demonstrably not true. The immunity wears off, and they unwittingly find themselves at greater risk not only of becoming infected with the disease, but at greater risk of complications in contracting it as an adult.

Those of us who had the measles as kids escape these conundrums.