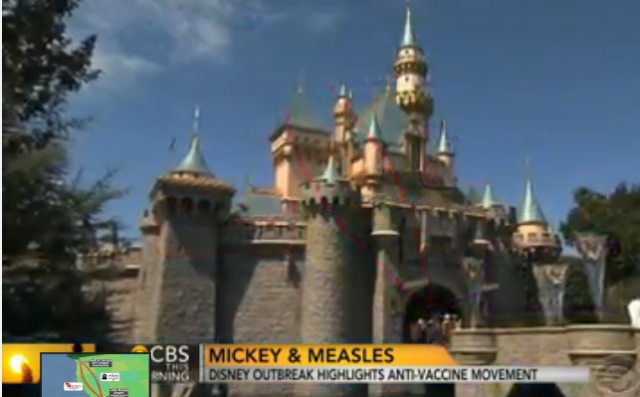 At the start of the New Year, I noted outbreaks of measles were being reported across the country.

Unfortunately for one of America’s most iconic institutions, the latest set of cases is being christened the “Disneyland Measles Outbreak”!

The number of cases from the initial infections occurring at “the happiest place on earth” is now 51…and more are expected.

The measles outbreak centered in California is rapidly expanding, with officials now confirming 51 cases of the illness — nearly double the number reported Tuesday — and warning that more people will probably fall sick with the highly contagious virus.

Officials said there was now evidence that the measles outbreak had spread beyond people who visited Disneyland between Dec. 17 and 20 and begun infecting people in the broader community.

It is the beginning of a scenario experts have feared. Health officials generally hope a measles outbreak can be contained within a manageable group of people and eventually extinguished by keeping the ill at home or in a hospital room until they recover, with the outbreak eventually being stopped by the broader community of vaccinated people.

The outbreak has been so bad in the San Diego area, it shut down an urgent care facility for a short time.

Frances Schnall, a Sharp communications manager, said that the six people entered the facility about 11:45 a.m.

Once it became clear that they had rashes and other measles-like symptoms, Schnall said the six were asked to cover their noses and mouths with masks and isolated from other patients in the facility’s waiting room.

…About 40 people were in the building at the time. All were asked their names and immunization histories before being released and that information was given to the county health department for follow up.

The infections are striking hardest in the wealthiest areas of the Golden State.

According to the Orange County Register, in 2014 the county had 22 cases of measles by April, nearly half of the 49 cases in the state at the time. On Wednesday, Orange County reported a measles case in an unvaccinated high schooler that was unrelated to the Disneyland outbreak.

Many anti-vaccine activists are unconvinced by the Centers for Disease Control and Prevention’s guidelines about the importance of vaccinating children against the “very contagious” measles, or its assurance that no link between the vaccine and autism has been found.

The problem isn’t limited to the OC. As the Atlantic reported in September, some Los Angeles county schools have vaccination rates “as low as South Sudan’s.” Several of the Disneyland cases involved people who were old enough to be vaccinated but hadn’t been, according to the CDPH; they included the commercial flight passenger, according to the Times.

And while getting vaccinated may have prevented some of these cases, it is being reported two of those recently infected were infants too young for the complete suite of shots. However, the quick spread of a childhood disease believed to be essentially contained within this country is now prompting the implementation of new school policies.

Orange County Health Officer Eric Handler warned that students who have not been vaccinated for measles may be excluded from attending school or day-care to prevent the further spread of the disease.

And while Walt Dinsey parks and resorts are working closely with public health officials, Mickey Mouse cannot be happy about the new moniker associated with the Anaheim theme park.

However, between the surge of unvaccinated immigrants, vaccination waivers for American children, and the ease of global travel, it probably won’t be too long before a second theme park is the epicenter for another disease outbreak.

“The measles outbreak centered in California is rapidly expanding …”

No surprise here … THANKS DREAMERS …

Connect the dots. Will the obvious cause of this outbreak (and others like whooping cough, mumps, etc.) be acknowledged, noted, publicized?

Doubtful. We can’t have the illegals pouring over our borders get blamed for anything, because raaaaacism.

Measles has been killing children all during the anti-vaccine movement. Prior to 1980, 2.6 million deaths a year, now down to 145,000 in 2013. This data is from WHO. The ‘MD’ who started this nonsense in the UK has been imprisoned for falsifying data, but the morons are still, well morons.

What is interesting bout this is that people who have been vaccinated are getting the disease. The fact is that there is a serious concern that the vaccines currently in use are not as effective as those used a generation ago. We do not have a clear understanding of how long the immunity imparted lasts. And while blaming the anti-vaccine crowd for this might be satisfying for many, it serves only to paper over the bigger issues with vaccine efficacy and the vastly larger numbers of unvaccinated people entering our country illegally.

Jim: That detail caught my eye as well. This is something I plan to follow closely. Thanks.

The other thing is that immunity can decline over time so you need a booster. My doctor tested me for that 3-4 years ago and re-administered DPT and mumps.

It’s the Herd Immunity thing, brutally summarized as follows. If you have a sick individual who contacts a healthy individual, the probability of the illness spreading is let’s say 50%. If every sick individual contacts an average of 4 others before being quarantined, you wind up with 2/4/8/15/32/64 sick people every cycle (pandemic). If *every* person has their shots, and the shot only reduces your chance of getting sick from 50% to 25%, the disease stays constant with 1/1/1/1 sick person every cycle(stable). No immunization reduces the chance of getting a disease to zero, but by squashing the probability into low single digits, broad immunization programs stop pandemics cold.

The anti-vaccine crowd isn’t only the usual suspects…. I know a number of people who have not vaccinated their kids because they are pro-life and object to vaccines developed using abortive fetal cell lines. There are manufacturers who produce vaccines using alternative media, but currently not for measles (Merck stopped producing the alternative in 2008), chickenpox, Hepatitis A, mumps, rubella and shingles. I know several families who had whooping cough go through–all un-vaccinated kids.

Here’s a chart for the US, set up for easy physician use.
http://www.cogforlife.org/vaccineschedulecdc.pdf

For those who are Catholic– it is licit to use the vaccines that prevent death or dire injury even though they depend on murders that already happened, in accordance with what your conscience will allow. It’s suggested that you write to the vaccine producers to register displeasure with the situation.