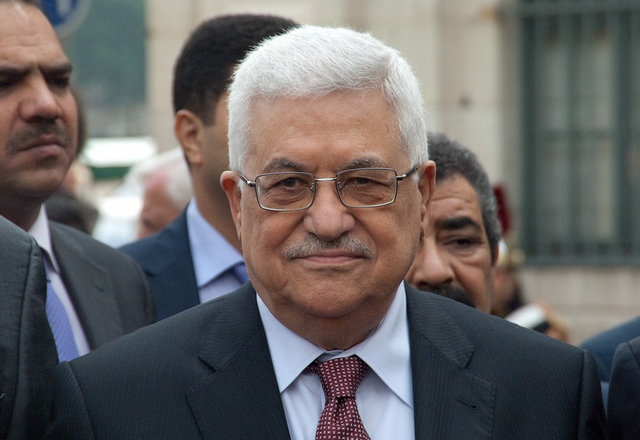 In The Dream Palace of the Arab, an excellent column about Palestinians’ inability to place their fantasies about the destruction of Israel over the reality of Israel, Bret Stephens focuses on Palestinian Authority President Mahmoud Abbas’ latest attempts to avoid negotiating with Israel.

For the past ten years Abbas has been indispensable. Portrayed as a moderate alternative and successor to unrepentant terrorist Yasser Arafat, Abbas was hailed as a moderate who could make peace with Israel.

But like his predecessor who rejected an offer of peace in 2000, Abbas rejected peace proposals in 2008 and again in 2014 (as Dennis Ross recently observed.) Because he’s viewed as essential, he can get away with anything. He’s fabulously corrupt; he hasn’t bothered standing for re-election, having just started the 11th year of a 4 year term; he allows little freedom; and he keeps saying “no” to peace. But since everyone believes that the alternatives are worse, he’s tolerated if not celebrated.

Stephen has a great observation:

Over a beachfront lunch yesterday in Tel Aviv, an astute Israeli friend had the following counter-fantasy: What if Western leaders refused to take Mahmoud Abbas’s calls? What if they pointed out that, in the broad spectrum of global interests, from Eastern Europe to the South China Sea, the question of Palestinian statehood ranked very low—on a par with, say, the prospect of independence for the Walloons? What if these leaders observed that, in the scale of human tragedy, the supposed plight of the Palestinians is of small account next to the human suffering in Syria or South Sudan?

In that event, the Palestinian dream palace might shrink to its proper size, and bring the attractions of practical statecraft into sharper focus. Genuine peace might become possible.

Even Abbas’ last two forays into imposing an agreement upon Israel can be explained by this observation.

In 2012, when he went to the General Assembly in a bid for statehood, the Arab Spring and the civil war in Syria dominated the headlines. Now it is the fear of ISIS. The unilateral moves have the effect of getting Abbas the attention he seems to crave. What if the world stopped paying attention to Abbas’ stunts?

What if the world told Abbas that a rich, old, dictator just isn’t that compelling? (To be sure, it was never Abbas’ intent to negotiate in good faith; he made that clear in 2011. But I think the timing of his unilateral actions can be explained by attempts to stay on the front pages of newspapers.)

I doubt that would compel him to make peace, because I don’t believe that he truly wants to make peace with Israel. Still, if Abbas knew that people weren’t willing to play his “blame Israel first” game and makes excuses for his failures, maybe he’d at least take care of building a nation and an economy instead counting on international aid and publicity.

It’s time to make a functioning society a priority over continuing the anti-Israel struggle.

It’s gone well beyond “the desire for struggle” now. At this point, no Palestinian leader or candidate can even speak about peace, and certainly not about compromise with Israel on any issue. It is sure defeat in elections and an invitation to personal destruction – and not just figuratively.

They have so propagandized their own people from earliest childhood on, for so many decades now, that peace is not even on the agenda. These poor wretches actually believe they will “win” and destroy Israel.

The Palestinians are beyond help, and it is solely a condition of their own making. They need to help themselves back to reality before anyone else can help them at all.

The problem is really quite simple: Abbas will not accept any deal leading to a Palestinian state that does not encompass their real goal of the destruction of the Jewish state of Israel. That was their avowed purpose under Sadat and continues to be their purpose now.

The Arabs created the so-called “Palestinian Problem” by their actions in 1948, and have continued to keep that ‘problem’ alive since as it gives legitimacy to their otherwise unreasoning hatred of all things Jewish. Without this “cover” the entire world would see the truth: this Problem is based on rabid religious intolerance. [BTW, it would be nice for someone in government, any government, to note that there really is no such thing as a “Palestinian”. The name has no basis in history or fact. It is perhaps the most successfully sold fiction of the last century.]

Newt Gingrich said it best “The Palestinians are a made up people.”

Certainly the filing with the ICC about Israel’s “war crimes” is going to come back and haunt them. And didn’t I read somewhere that Israel was filing their own piece of paper with the ICC?

The Palestinian leadership has an enormous financial stake in perpetuating the conflict. The problem would go away quickly if aid were cut off to the PA and to Hamas and if the UN shut down its “refugee” operation. The average age of the few, true Palestinian refugees is probably mid-seventies.