This “trial balloon” is filled with lead. 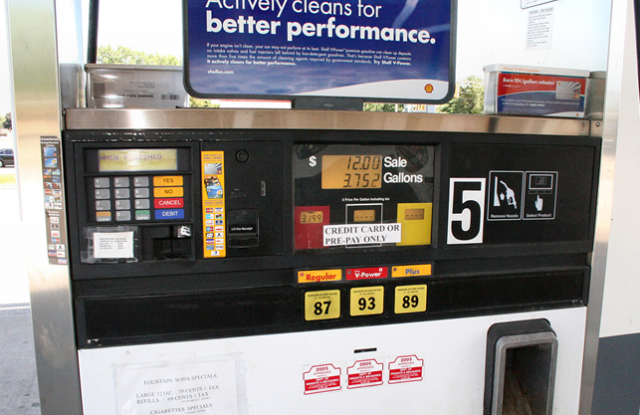 When it was confirmed that the Republicans would be taking over the US Senate after November’s historic election many of us, fueled by a potent combination of conservative activism and Obama administration incompetence, were expecting big things.

One of the items on the “Wish List” was tax reform. As the old adage goes: Be careful what you wish for… you just might get it.

Even before formally taking charge of the US Senate Commerce, Science and Transportation Committee, Senator John Thune (R-SD) weighed the option of solving our infrastructure problems with…a tax hike!  When FNC’s Chris Wallace queried Thune about raising gas taxes, his response was astonishing.

The incoming Republican leader of the Senate Transportation Committee said Sunday an increase is up for consideration, as “we have to look at all the options.”

“I don’t think we take anything off the table at this point,” John Thune said on “Fox News Sunday.”

Prices at the pump are at the lowest point in years — the nationwide average has tumbled more than a dollar in the last year, reaching $2.20 on Monday.

That’s given drivers significant relief at the same time as the federal highway fund continues to face huge shortages. Thune said the fund is looking at “about a $100 billion shortfall.”

The full segment is here, and the pertinent exchange starts at 9:50.

Translation for those who don’t speak politicoese: He would “prefer” not to do it does not mean he “absolutely won’t” do it.

Does it ever occur to anyone in Washington, D.C. to review current spending to see where funds may be diverted to something useful like infrastructure? Thune may want to chat with former Senator Tom Coburn, who suggests looking at the $700 million spent on cybersecurity for government sites, which has not been effective.

U.S. Government agencies have been frequent victims of cyber attacks in the last year. Attacks – some attributed to foreign governments – have targeted everything from The White House to the Office of Personnel Management to NOAA, the National Oceanic and Atmospheric Administration.

Coburn recommended a variety of measures to improve Homeland Security’s management of its responsibilities vis-a-vis cyberspace. Among them: streamlining Congressional oversight of the Department so that it can be managed more holistically.

Alternatively, perhaps it is time to revisit who should be in charge of that infrastructure? Funding from road repair comes from the gasoline tax. Between the fracking success of North Dakota and Saudi market manipulations, gas prices have plunged — as have tax revenues.

A thoughtful piece on Heritage.com from Matthew Grinney and Emily Goff offers some fresh ideas for Thune to consider.

Dawn Wildman, co-founder of the SoCal Tax Revolt Coalition, has a theory about Thune’s statements: “There are two likely reasons Senator Thune made the statement he did: He wanted to be a moderate voice of reason or he was floating a trial balloon. We are encouraging everyone who was calling to complain about John Boehner’s reelection to the Speaker’s position to give Thune a call.”

Wildman notes that the new California gas tax hike, done in the name of global warming, is so unpopular that citizens are organizing to get a repeal measure on the ballot.

If this was a trial balloon, it’s full of lead.

I am sure Estrogen will be along shortly to point out why this is a wonderful idea.

I love the high level of discourse you bring to the table. Reminds me of the schoolyard, with the D-students taunting each other.

Note that Estragon attacked you and not Thune or the gas tax.

He has no argument. He just calls people wackos and nuts and considers himself sage.

Of course, to them, that’s not “problem solved” – that’s problem created – because then they’d have to fund the shortfall taken from the general fund with a different tax.

“Oh, damn dude, I saw this chick and she wanted a ride, and she and her kids needed food. C’mon man, have a heart.”

“Oh, so you bought it for her – and, oh, got laid (you bought votes), and now you come to me and hit me up – saying you need a car that runs and that if I don’t give you more money I have no heart and that you’ll character assassinate me to others if I don’t.”

Remember the ‘Dole Dime’ when the gas tax got raised ten cents and every single bit of hate got directed at the Republican of their choice?

So do the Dems. They’re waiting to see who they can tie this albatross onto.

“I don’t think we take anything off the table at this point,” John Thune said on “Fox News Sunday.”

Oh, I think there are things you’d BETTER take off the table, before the carving knives come out, and your ass gets cut off your seat at the “table”.

Isn’t it wonderful how they always find a ‘shortfall” just when they need one, that or a earth-shattering deadline.

We have to have a new political party, just have to.

stop tossing fuel taxes into general fund and problem is solved.
stop underwriting amtrak every year, if companies want to run passenger trains they will.

No. Just no. Sick and tired of these politicians that are not content to let us have a few extra bucks in our pockets.

Live within your means, Congress. If that’s not possible, you have three alternatives: 1) Cut the federal bureaucracy, 2) Donate your own **** money to make up the shortfall, or 3) Both 1) and 2).

Take your pick. The Constitution doesn’t give you the right to rape taxpayers every time you whine about not having enough money.

Thune was about the last Repub I donated money to. I was thrilled to help upset a long-entrenched, big-spending Dem. Then, practically the first thing Sen Thune did in office was to go after some pork for his state.

I don’t donate to Repubs anymore.

Of course, the genius brigade here is condemning Thune for something he did NOT say.

All he said was that nothing was “off the table.” That’s prudent. Once you go ruling out things, there is always one more to rule out until there are no options left to consider at all.

Ideally, we could balance the budget and pay off the debt by cutting spending. But we do not live in an ideal world, and we should recognize that is just not going to happen.

There of course remain those who insist on their ideal solutions to the exclusion of any others, meaning nothing will get done at all, and the debt keeps mounting.

“Ideally, we could balance the budget and pay off the debt by cutting spending. But we do not live in an ideal world, and we should recognize that is just not going to happen.”

And there you go.

Estragon is for higher taxes. Also, shut up rubes, because you are stupid, childish, and prone to temper-tantrums.

The hell with the gop.

New taxes certainly should be off the table. If they want more money for infrastructure, they can strip it from the EPA, the Dept of Education, IRS, etc… most federal agencies could be downsized by 60% (some, entirely eliminated) and this country would be better off for it.

You didn’t disappoint on providing advice. I don’t know what makes you so obnoxious, but whatever it is, it works.

Is there anything these so-called representatives of the citizens of the U.S will not consider to try to suck more money out of us? If I believed that the government operates in an efficient manner; if I believed there isn’t massive waste; if I knew members of Congress didn’t take graft in a number of ways; I would agree that a gasoline tax hike was justified. I don’t.

Gas tax revenue went down as prices went up because people stopped driving as much. Fewer pleasure drives, fewer boat rides, less off roading, more combining errands and ride sharing. Prices stay down and people will start driving more, gas tax revenue will go up.
I have a customer that last had is boat out the month after Katrina, 100 gal gas tanks. 5 knots a gal, wind and tide permitting. Pity he gave up waiting last year and donated it to a charity raffle.

I thought that gas taxes were a set amount per gallon rather than a percent of the price. Lower prices shouldn’t affect the amount of tax revenue to the government.

Gas prices affect the amount of non-essential driving and recreational use of gas.

Yes, it’s set at 18.4 cents per gallon. NOT dependent on the price of gasoline. It’s the increasing efficiency that’s hitting the pot, not the lower prices.

We should be saying the following:

“Hey, the amount of money generated was FINE before Obama raised the Corporate Average Fuel Economy (CAFE) standards. He did so without Republican input. Let HIM fund the shortfall out of the Executive Branch departments.”

THIS is the cost of attempting to “reduce vehicle pollution.” It is higher taxes in the form of [engage whiny voice] “we’re losing money and can’t afford to fix the roads anymore.” [end whiny voice]

Tell the Dimwit-ocrats to deal with it. It was a foreseeable consequence of their genuflection to the Radical Green Movement that the amount of revenue would shrink with the number of gallons of gas “saved.”

Our Battle-cry should be: NO NEW TAXES.

Neither “party” of Congress-thralls gives an obese rodent’s gluts about the people of this country. They are there to rule OVER us, regardless of the letter behind their name. We are in reality a one-party state, and voting means nothing because both parties are only concerned with power and money.

What Thune and the rest of the GOP leadership who assigned him to float this trial balloon are saying is that the windfall of profoundly sinking gas prices shouldn’t fall to American consumers who’ve been paying exorbitant prices for years, it should fall to the federal government. Price savings? Not so fast…. YOINK… new federal gas tax hike.

And once this proposed gas tax hike were put in place, do we think it will come off if/when gas prices go back up?

I used to think commenters who said the GOP was no different than the Democrats were a bit hyperbolic, but there it is – first thing out of the gate with a new GOP majority in the Senate is…. new taxes?

The corrupt GOP hacks hogging the leadership positions of the party are now the cause of every problem – literally.

Washington DC is one big, corrupt lead balloon – and nearly everyone in it should be on trial.

Border security is also ineffective, take the money from there. /sarcasm