“They want to make sure he doesn’t take it in a suitcase back to Chicago and move on.” 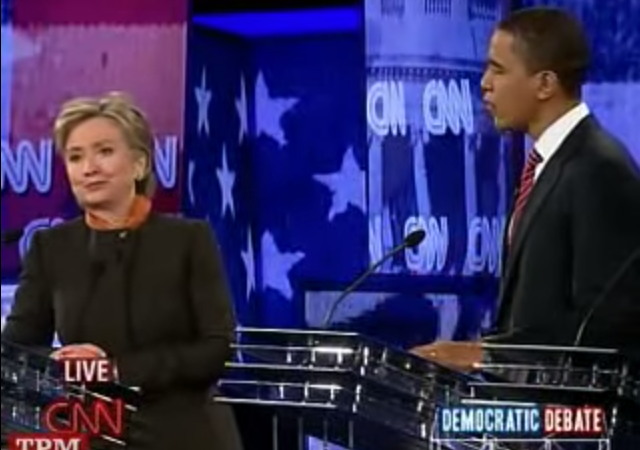 As the race for 2016 shifts into gear, old conflicts are reemerging between Hillary Clinton supporters and Team Obama; this time, it’s over access to Obama’s massive email lists.

Amie Parnes and Niall Stanage of The Hill reported:

Obama, Clinton tensions build over email lists ahead of 2016

New tensions are emerging in the relationship between allies of President Obama and Hillary Clinton.

At issue is the fate of the political equivalent of gold dust — the enormous email list, comprised of many millions of supporters and donors, that the Obama team has compiled over the course of his two presidential campaigns.

The Clinton camp would dearly love to get its hands on the list, but there is no promise as yet that the president’s aides will comply.

There are “large concerns” about the lists among Clinton supporters, one Hillary ally told The Hill.

To the Clintons and their friends, it’s near unthinkable that a Democratic president — who has plenty of reasons to want a member of his party to succeed him — would withhold such a valuable commodity.

But Team Obama has long believed that the president’s support is built upon the bedrock of his personal qualities rather than mere party identification. His people are loath to be seen as treating the passion of his supporters in a cavalier fashion.

“There’s a lot of data — voter data, massive email lists — that Obama built and there are a lot of people who want to make sure that he spreads that wealth,” the Clinton ally said. “They want to make sure he doesn’t take it in a suitcase back to Chicago and move on. No one wants to see it disappear or have it used just to build a library.”

Democrats are probably hoping everyone has forgotten how ugly the conflict between Hillary and Obama became during the 2008 Democratic primary. There’s plenty of evidence that the rift never healed.

Axelrod: You Hear ‘Ready for Hillary.’ It’s Like, Ready for What?

Host Joe Scarborough expressed his frustration with all of the talk about Clinton as a presidential candidate, even though no one knows what kind of platform she would run on.

Axelrod agreed, saying that Clinton is biding her time and trying to figure out what she stands for.

“And what happened in 2008 was that Hillary’s candidacy got out in front of any rationale for it,” Axelrod said. “And the danger is that’s happening again. You hear ‘Ready for Hillary.’ It’s like, ready for what?”

Here’s a moment from the 2008 debates you may have forgotten—and that Democratic strategists probably hope will stay below the radar:

OFA has organized itself with what it calls the “Shadow Elite,” 13 million global citizens who believe in the Change.

Expect Obama to transform into Al Sharpton on steroids.

The email lists where on a hard drive that crashed and was recycled.

We need another empty chair meme. A picture of an an empty rocking chair with the “Ready for Hillary” logo slapped on it.

Poor Hillary. After she sold her soul to him, Obama is going to jerk the rug out from under her when Liawatha declares.

It couldn’t happen to a more deserving woman.

One of the ways Barracula will continue to wield power in the U.S. after leaving office will be that filthy lucre the Collective pretends they dislike.

From the outside, this looks quite premature. Sure, the Hillary! camp would love to start fund raising for their nomination fight from the main Dem donor lists. Already, she probably has an overwhelming fundraising advantage over her Dem opponents for the nomination. Might as well make it all but impossible for anyone to run against her, by her getting access, this early, to the main Obama contribution list.

In case anyone is starting to shed tears for her, she is already running donation campaigns with her old supporters – if you gave in 2007/8, you are likely to have been hit up already for money, likely on multiple occasions. All before actually announcing that she is going to run.

What right does she have to those lists? It really makes the case of not giving out contact info to politicians when they can “share” then however they want. Hillary can build her own darn data base.

Think how many advertisers would also love to have that e-mail list. I mean, if you can sell Obama to these people, you should be able to sell them vacuum cleaners that do rugs and roast chickens at the same time for only $19.95, but wait……..

Right, his support’s based on “the bedrock of his personal qualities.” Such as? In my view, the bedrock is his ignorance, narcissism, grandiosity, and vicious pettiness. Obama’s support is based on sheer naked utilitarian power to overwhelm opposition and impose “progressive” ideology. Alinsky-ism, nothing more. Oh, and he loves him some Islam.

I so agree – he’s got a cult of personality built, and while that list might do Hilary (would do) some good, her “base” and his are NOT the same.

SOME are – but many are not: “Obama the first black president” (she’d play the gender card), grievance mongering (his black, hers gender), and PC poltics (shared).

While PC grievance blacks and rad-fem’s share SOME of the same PC ideals, they are also not the same issues per se.

That said – she’ll get the lists – and he’ll probably get quite a few “intros” so when he leaves the same speaking circuit that Bill is on will now be paying Obama millions.

She really is a putz.

There are powerful people working behind the scenes, manipulating things, but she is just a poorly aging puppet with about as much brains. When it comes time to open her mouth, she’ll fade as fast as Romney.

I wonder if his donor list includes a lot of overseas non-US citizens. And I wonder if the obama people are afraid that these names might get out. By ‘accident’ as it were.