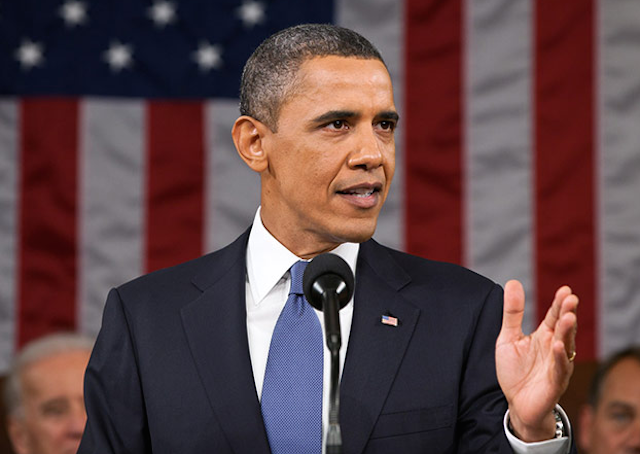 In last night’s State of the Union address, President Obama made a lot of promises. From free community college, to middle class tax breaks, to massive tax hikes on the wealthy and investors, the President served up a bill of goods that, given a Republican-controlled Congress, will take a miracle to become reality.

This is nothing new for Obama, who has a pretty poor record of delivering on his most high-profile promises. He hasn’t allowed Congress to address our broken immigration system; he hasn’t eliminated the threat of al-Qaeda; he hasn’t closed the detention facilities at Guantanamo Bay; and he certainly hasn’t brought the kind of “change” that America wants or deserves.

Based on an informal tally, President Obama has broken a whopping 112 SOTU promises during his time as President. I don’t think any reasonable person would argue that no president has ever added aspirational policy goals to his annual address to the nation, but coming from a man who came into office claiming revolutionary status, the number seems…high?

Grabien compiled a video montage of all 112 broken promises. Click below the fold for an all-too-long list of bullet points highlighting all the ways Obama has failed to live up to his promises.

1. The stimulus bill will create 3.5 million jobs over the next few years, 90 percent of which will be in the private sector.

2. Create program that will enable Americans facing foreclosure to lower their mortgage payments and save their homes.

3. Double the supply of renewable energy within the next three years.

4. The “largest ever” federal spending program on science will yield breakthroughs in energy, medicine, science, and technology.

5. Lay down 1,000s of miles of power lines to connect Americans’ homes to these new sources of energy.

8. Use stimulus funds to spend on preventive health care, which will get federal health spending “under control.”

9. Use the savings that result from the stimulus’ reform of health-care to reduce the deficit.

10. Cut the deficit in half by the end of his first term in office.

11. Go “line by line” through the federal budget to eliminate wasteful and ineffective programs – saving $2 trillion over the next 10 years.

13. Stop the growing cost of Medicare and Social Security.

17. Use stimulus funds to build a high-speed railway in Florida.

18. Research funds from the previous year’s stimulus will cure cancer, lead to “the cheapest solar cells.”

20. Passing a climate-change law that will make clean energy profitable

21. Passing health-reform that lets Americans keep their doctors and their plans.

22. The health-reform law will reduce costs for “millions” of families and businesses

23. The health-reform law will bring down the deficit $1 trillion over the next 20 years.

25. Cut programs we don’t need to maintain a balanced budget.

27. Go through budget “line by line” to eliminate programs that we can’t afford and don’t work.

28. Create a bipartisan fiscal commission; the recommendations of which he’ll enact.

30. Create a website that publishes every lawmakers’ earmark requests.

31. Never give up “ trying to change the tone of our politics.”

39. Reduce unemployment by increasing the number of people working on infrastructure projects – ensuring these projects are “fully paid for.”

41. Projects will be prioritized by importance, not by politics.

42. Give 85 percent of Americans access to high-speed rail within 25 years.

43. Within the next three years, enable 98 percent of Americans to receive high-speed wireless Internet.

46. Starting this year, freeze domestic spending for the next five years.

51. Veto every bill that contains earmarks.

53. Consolidate federal jobs-training programs – creating a single website that makes all information about these programs available in one place.

54. Convert federal unemployment insurance into a system that focuses on finding the unemployed jobs.

56. Force all high schools to require students to stay in school until they graduate or turn 18.

57. Open more than 75 percent of off-shore U.S. territory to drilling.

61. Create “financial crimes unit” to crack down on white-collar crime.

62. Work with Congress to procure power to consolidate federal bureaucracy.

63. “End the notion that political parties must be engaged in a perpetual campaign of mutual destruction.”

64. Reform Medicare and Medicaid to save as much as was proposed by the Simpson-Bowles Commission.

66. Raises taxes on the wealthiest seniors.

67. Bring down health-care costs by changing the way the federal government pays for Medicare.

68. Eliminate loopholes and deductions for the “well off.”

69. Enact comprehensive tax reform that brings down the deficit and encourages job growth.

72. Create a “fix it first” program that will direct the unemployed to the highest priority programs.

73. Make “high quality” preschool available to every child in America.

74. Require that aid to colleges be distributed according to the value they impart upon students.

77. Create a tax incentive for companies to hire the long-term unemployed.

78. Create a program to put people back to work by rebuilding vacant homes in rundown neighborhoods.

79. Enact new tax credits for businesses that hire and invest.

84. Keep the promises already made.

86. Use the money saved from corporate tax reform to finance new infrastructure spending.

89. “Do more” to help entrepreneurs and small business owners.

90. Use government research funds to create entirely new industries – like vaccines that adapt to evolving bacteria, and inventing material thinner than paper but stronger than steel.

92. Use executive orders to cut red tape to enable factories to be built that are powered by natural gas.

93. Reform taxes so that fossil fuel companies are taxed more and “ fuels of the future” are taxed less.

97. Reform unemployment insurance to encourage Americans to return to the workforce faster.

102. Reform the tax code to help lower-class Americans save

103. Give every American access to “an automatic IRA on the job.”

104. Ensure Americans never have to wait more than a half hour to vote.

111. Be the “first” to call for more sanctions if Iran doesn’t abandon nuclear program.

112. Reform Veterans Affairs so that vets no longer have to deal with backlogs and instead receive the health care that they need.

Have the seas stopped rising?

“Promises made
Promises broken
Measures of our demise
Secrets of souls that
Rarely get spoken
Pleasure’s a thin disguise.”

You realize that he blames the Republicans for keeping him from fulfilling all those promises, don’t you?

For a supposed “Constitutional Scholar” he is pretty stupid isn’t he?

Well, it is Bush’s fault! (is /sarc tag really necessary?)

His is a hero legacy among the left, primarily due to Obamacare passage. Everybody else will see him as another Jimmy Carter.

Obama has built his legacy out of stumbling blocks.

Do we really want him filling all those promises?