Obama Vows to Play Offense Against The Enemy

Obama Vows to Play Offense Against The Enemy 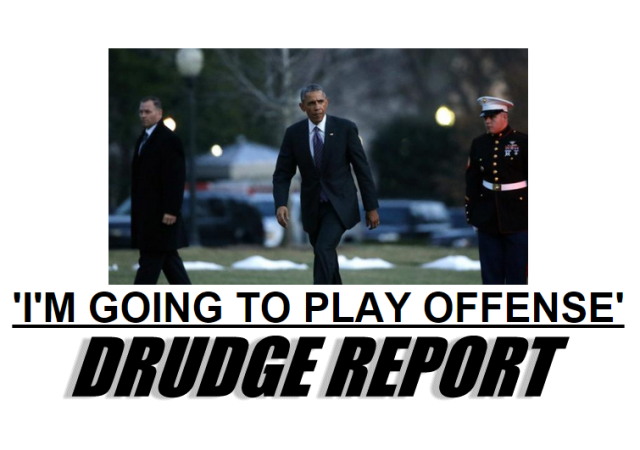 Most Americans would be happy to hear that Obama is going on offense against ISIS, the people who carried out the attacks in Paris, or any of the other enemies of America. Unfortunately, there’s only one group Obama consistently views as a threat: Republicans.

Last night’s headline on the Drudge Report was a story by Manu Raju of Politico. It looks like Obama is all fired up and ready to go:

President Barack Obama made clear Thursday in a closed-door session with Senate Democrats that he’s prepared to veto hostile legislation from the GOP-controlled Congress, including an Iran sanctions package on the front-burner of Capitol Hill.

According to several sources at the Thursday summit in Baltimore, Obama vowed to defend his agenda against Republicans in Congress, promised to stand firm against GOP efforts to dismantle his agenda and called on his Democratic colleagues to help sustain his expected vetoes. The president also was explicit over his administration’s opposition to an Iran sanctions bill, promising to veto legislation with his administration in the midst of multilateral nuclear negotiations with the Middle Eastern regime.

Even though Obama’s position on Iran sanctions differs from a number of powerful Democrats, the session, several sources said, was more of a pep rally than confrontation. Despite his lame-duck status, the president promised that he would not sit on the sidelines in the next two years. He vowed more executive actions to implement his agenda, something bound to prompt anger from Republicans who have called the president’s unilateral moves, particularly on immigration, an unconstitutional power grab.

Obama’s intransigent response to his party’s rebuke was previewed ahead of the midterms in a Politico report which assured dispirited progressives that a “big counterattack” was in the works if Republicans took control of the Senate. Vice President Joe Biden, too, preemptively labeled the coming upbraiding the result of a messaging failure. “We have to be more direct and clear about exactly what it is we’re looking to do,” he said hours before the historic vote.

The administration’s disdain for the voting public’s admonishment of the president and his party was made perfectly clear in White House Chief of Staff Denis McDonough’s galling response to a reporter who asked how the midterm thrashing will change Obama’s approach to governance. McDonough replied that it wouldn’t. “They’re going to see Washington working better if this president has his way,” he tossed off with a smirk.

@gabrielmalor His entire presidency has been an exercise in avoiding the electorate. Obamacare, immigration, Syria—all cynically timed.

Featured image is a screen capture of the Drudge Report.

Typical bully. Only be aggressive with opponents that cower.

So after a wave election against Obama policies, Obama vows to be even more offensive.

Free junior college, free sick pay for all, freed terrorists to appease ISIS, free citizenship to all illegals … only evil white Christians are standing in the way of “social justice” for the world.

“God Damn (WASPy) America” is the offensive Obama Doctrine. The “problem” for Barack is the liberty guaranteed by our constitution, designed to constrain tyrants.

I gave you a thumbs up. I wish I could have given you more.

Right on the money. Well said.

You only failed in not including “old” and “male”.

I wouldn’t worry too much.

Have you seen his jumpshot?

With those tiny little match-stick wrists it’s a wonder he doesn’t hurt himself just handling the ball.

The moment that he vetoes a bill to block an illegal executive action, each House should formally censure him to make clear that this behavior is unacceptable and impeachable, and does not become a precedent.

“And then I’ll pivot back to free safety”

We’ve all learned to take this man’s word with a grain of salt, but it’s important to remember he lies to his own base as well. He initially promised amnesty to illegals in 2007, almost 8 years ago. He routinely makes promises to the greenies in his base that go unfulfilled or folded into a newer, better lie to string them along.

He may well ‘go on offense’, but this just as well may be him saying what he has to say, because he can’t very well say he’s going into neutral or retreat.

Anyway, I wouldn’t react until he actually does something. With Obama, you can’t watch his lips, you have to watch his hands. Ignore what he says, watch what he does.

It’s a blessing that he and his administrations are imbeciles.

Could you imagine the EPA and IRS used as weapons by competent people?