In its words and actions, the administration has made it clear Palestinians will pay no price for not making peace. 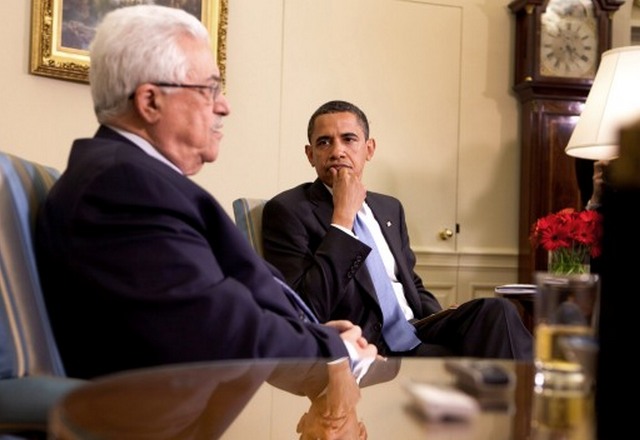 As Prof. Jacobson blogged last week Palestinian Authority President Mahmoud Abbas attempted to get the United Nations Security Council to impose terms of a peace settlement on Israel and then, failing that, applied to the International Criminal Court in an effort to bring war crimes charges against Israel.

While Abbas bears the blame for abandoning bilateral negotiations for unilateral moves, it’s impossible to ignore the role the Obama administration has played in encouraging to pursue this path.

Shortly after Barack Obama was elected president, Jackson Diehl of The Washington Post profiled Abbas, and this is part of what Diehl wrote:

What’s interesting about Abbas’s hardline position, however, is what it says about the message that Obama’s first Middle East steps have sent to Palestinians and Arab governments. From its first days the Bush administration made it clear that the onus for change in the Middle East was on the Palestinians: Until they put an end to terrorism, established a democratic government and accepted the basic parameters for a settlement, the United States was not going to expect major concessions from Israel.

Obama, in contrast, has repeatedly and publicly stressed the need for a West Bank settlement freeze, with no exceptions. In so doing he has shifted the focus to Israel. He has revived a long-dormant Palestinian fantasy: that the United States will simply force Israel to make critical concessions, whether or not its democratic government agrees, while Arabs passively watch and applaud. “The Americans are the leaders of the world,” Abbas told me and Post Editorial Page Editor Fred Hiatt. “They can use their weight with anyone around the world. Two years ago they used their weight on us. Now they should tell the Israelis, ‘You have to comply with the conditions.’ “

Abbas was planning on making no concessions, but as Diehl wrote, bought “a long-dormant Palestinian fantasy: that the United States will simply force Israel to make critical concessions, whether or not its democratic government agrees, while Arabs passively watch and applaud.”

So here we have Abbas, considered a moderate, who refuses to make peace with Israel and instead begs for American. And, in the end he gets American pressure later in 2009 and Israel agreed to freeze settlement building into 2010. Yet Abbas couldn’t bring himself to negotiate with Israel until a few weeks before the settlement freeze expired and then walked out of the talks when Israel would not extend it further. Instead of castigating Abbas for not negotiating in good faith the administration instead prevailed upon Israel to extend the freeze, unsuccessfully.

Remarkably, Abbas then blamed Obama for not backing him up. The New York Times reported in September 2011 about the freeze:

Among Palestinians, the disappointment is all the more acute because their hopes for Mr. Obama were so high. Judging by Mr. Obama’s background, temperament and worldview, Palestinians expected him to bring a new focus to the peace process and a greater sympathy for the Palestinian cause. It did not go unnoticed that he is friends with a prominent Palestinian-American scholar, Rashid Khalidi. …

“We hoped a lot that in his administration, there would be real progress,” said Nabil Shaath, who leads the foreign affairs department of Fatah, the main party of the Palestinian Authority. “But later on, disappointment set in,” Mr. Shaath said in a telephone interview from Ramallah on the West Bank. “He really could not deliver what he promised in terms of a cessation of settlement activity.”

When Mr. Netanyahu refused to extend a moratorium on construction, Mr. Abbas felt let down. And he blamed Mr. Obama for leading him on. In an interview with Newsweek in April, Mr. Abbas said: “It was Obama who suggested a full settlement freeze. I said O.K., I accept. We both went up the tree. After that, he came down with a ladder and he removed the ladder and said to me, jump.”

What Abbas is saying that he expected the administration to deliver Israel to him on a silver platter but didn’t deliver. It’s hard to argue that Abbas is serious about peace when he works so assiduously to have others do his work for him.

Given the lack of accountability he’s had to face, Abbas felt confident to  write an op-ed in The New York Times that he would pursue unilateral moves against Israel in international organizations and cause no outrage that he was eschewing negotiations. He got what he wanted once, said it wasn’t enough and evaded responsibility.

So in 2012 Abbas went the unilateral route and sought statehood in the United Nations General Assembly. No one discouraged him from doing it and it created a diplomatic nightmare. As the late Barry Rubin wrote in 2013, strong American action could have prevented that gambit.

Let’s also note the incompetence and failure of that government to stop leading allies at the UN General Assembly to vote for non-member statehood (a non-binding vote) last year, despite a one-year warning the PA would try this.

Shortly before the American-sponsored talks tanked last year, Obama dropped one of his not-so-subtle hints that Israel better make peace to Jeffrey Goldberg. Goldberg summarized it, “The U.S., though willing to defend an isolated Israel at the United Nations and in other international bodies, might soon be unable to do so effectively.”

Predictably, a month later Abbas, according to Israeli negotiator Tzipi Livni, torpedoed the talks by refusing to accept an American framework agreement, signing on to fifteen international conventions and then agreeing to a unity government with the terrorist group, Hamas.

There is no way to sugarcoat this. President Obama since he was inaugurated 2009 has made it clear that it is Israel’s responsibility alone to make peace. Palestinians have no obligations. With this free pass from the American government Abbas has done exactly what you would expect. He has doubled down on his unilateral efforts and continued to sabotage the peace process.

(In an op-ed today, former American peace negotiator Dennis Ross recognized this and wrote that it’s time to stop giving the Palestinians a free pass. I’ll plan to cover the Ross op-ed tomorrow.)

Is anyone surprised? Just for grins & giggles, has anybody asked the Israelis if the Palis are going to pay a price? Somehow I doubt that this will fly any better than that lead balloon that I hear people keep using.

At every turn, Obama favors the Muslim.

He does the utmost to advance Islam.

I’d like to stop referring to them as Palestinians since they are just Arabs. And there is no serious justification for another Arab state, let alone a Palestinian one.

I wonder if they will attempt to exploit the apartheid or separation argument, and what actions will it justify this time.