No, Iran, Obama did not “unfriend” Netanyahu on Facebook

No, Iran, Obama did not “unfriend” Netanyahu on Facebook 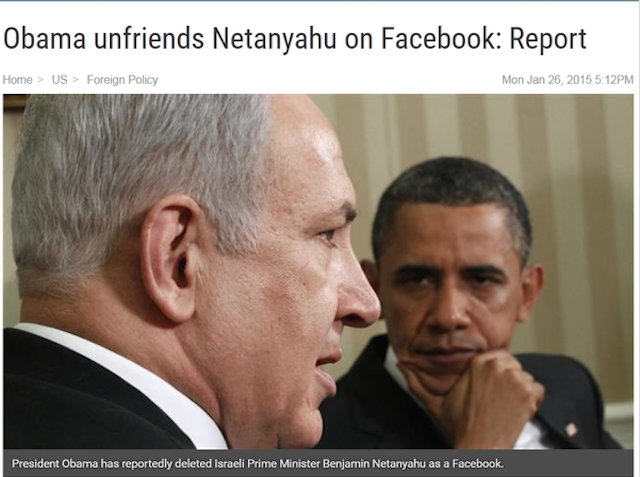 Iranian media outlet Press TV made a major error yesterday when they mistook an Israeli satire article for actual news.

I realize that most of us have been fooled at some point by a link on Facebook or Twitter making some sort of ridiculous claim, but Press TV reached a whole new level of gullible with this one: they actually believed that President Obama used social media to diss Israeli Prime Minister Benjamin Netanyahu.

The report was based on this satirical piece by The Israeli Daily, which they even cite!

The icy relationship between President Obama and Prime Minister Netanyahu hit a new low this week, with the American president ‘defriending’ the Israeli Premier on Facebook.

Though it’s unclear exactly when Obama made the move to delete his Israeli counterpart as a Facebook friend – most likely around the time Netanyahu accepted Boehner’s controversial invite – Netanyahu only learned of the snub yesterday, according to a source close to the prime minister.

“Bibi was looking at [Attorney General] Eric Holder’s page, and he happened to check what friends they had in common,” the source explained. “And he sees [Secretary of State John] Kerry, Bill [Clinton], Hill [ary Clinton], Fabio, but no Obama. So he goes to Obama’s page, and sure enough it says ‘Add Friend.’ We were in complete disbelief.”

While the White House had no official comment, a source close to the President said Obama had reached his maximum allowed Friends and wished to add Iranian Foreign Minister Mohammad Javad Zarif after a pleasant meeting on Iran’s nuclear program. The source said the defriending wasn’t personal, but conceded Obama had gotten sick of seeing Sara Netanyahu on his newsfeed and the Prime Minister’s daily invitations to play Candy Crush.

How they could treat that seriously is anyone’s guess.

Now if only Obama treated their nuclear ambitions this seriously.

The outlet finally removed the article and associated social media postings, but fortunately for you and me, Google cache is forever: 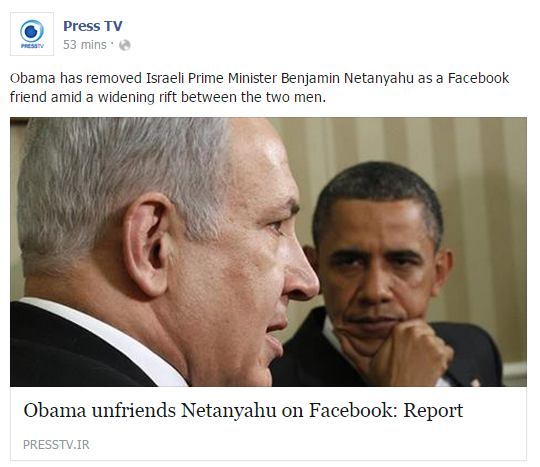 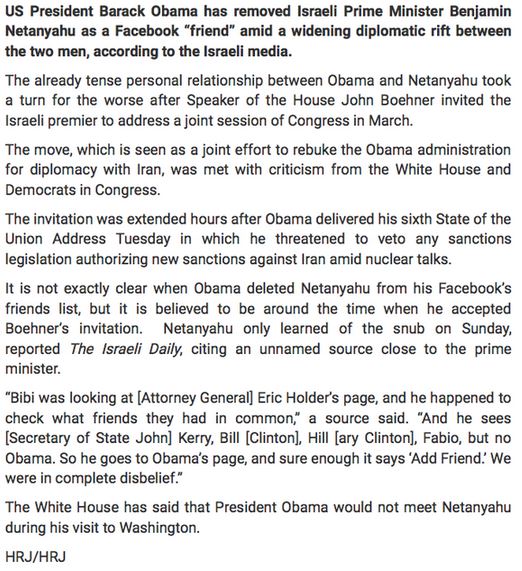 This is either a testament to the Iranian media’s overwhelming need to seize every opportunity to slime the US-Israel dynamic, or proof of the outlet’s need to hire an editor who’s a little less entertained by international not-news.

Either way, the schadenfreude burns.

They’re Islamists, they have no concept of humor or fun.

“… schadenfreude burns?” That’s almost as bad as “The Storm that Wussed!”