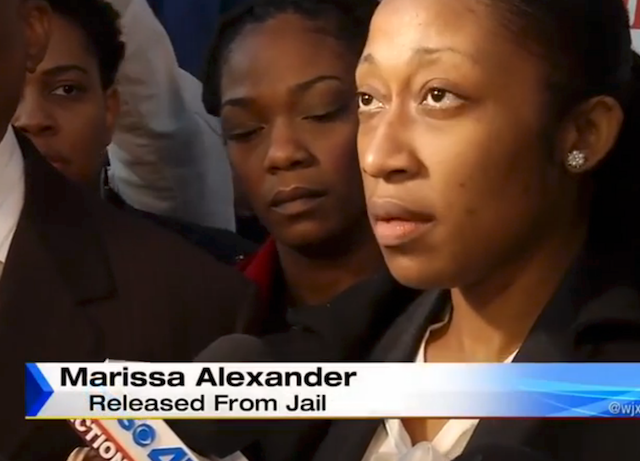 We noted here back in November that 34-year-old Marissa Alexander–facing up to 60 years in prison for firing a bullet past her husband’s head and her two step-children–had once again been offered, and this time accepted, a 3-year plea agreement:  UPDATED: “Warning shot” defendant accepts 3-year plea deal. The renewed 3-year plea counted much of Alexander’s time already served, resulting in her release from jail yesterday:  Judge: Marissa Alexander released to house arrest.

Alexander’s failure to accept a similar agreement in the immediate aftermath of the 2010 shooting led to her conviction and three concurrent 20-year mandatory minimum sentences under Florida’s “10-20-Life” law (§775.082 Penalties; applicability of sentencing structures; mandatory minimum sentences for certain reoffenders previously released from prison).  She earned a re-trial after the appellate court correctly found that there was a substantive defect in the trial court’s self-defense jury instructions.  In the meantime, the Florida law on “10-20-Life”  had changed to require that sentences be served consecutively, so that Alexander now faced a mandatory minimum of 60 years.

Although released from jail, Alexander is required to wear an ankle monitoring bracelet for two years. The conditions of her release restrict her to leaving her home only to go to work, job interviews, church, family medical appointments, and her child’s school.  Any other travel will require judicial approval.

It is notable that Alexander has repeatedly violated previously agreed upon restrictions on her conduct imposed as a condition of release from jail.  Among the many violations of her release terms was an assault upon her husband, to which she would later plead no contest.

Although Alexander and her supporters have long sought to paint her as a “domestic violence victim,” the fundamental facts of the case have always been very straightforward.

Alexander and her husband engaged in a verbal argument, which escalated perhaps to some minimal, perhaps accidental, physical contact.  Alexander left the scene of the argument, went into the garage and into her vehicle, retrieved a pistol, returned to the scene of the conflict, pointed the gun at her husband as he stood beside his two minor children, and fired a bullet past his head and into the wall behind him.  The bullet penetrated that wall into the next room, where it finally lodged in the ceiling.

Alexander then fled the scene, and neither sought the aid of others or reported the incident to the police (her husband would later contact authorities.)  Alexander was later arrested and charged with three counts of aggravated assault with a firearm, thus qualifying her for sentencing under Florida’s “10-20-Life” statute.  She was offered a three-year plea agreement, turned it down, and was convicted at trial.

Alexander has repeatedly demonstrated extremely violent, even life-threatening, behavior when angered, and has repeatedly shown contempt for orders of the court and their restrictions on her freedom of action.  It remains unknown, of course, whether these destructive behaviors will continue in the future.

Will Vegas and Atlantic City be taking bets on how long before she winds up back in the slammer?

I’m not Alexander fan, but I think most here agreed at the time that twenty years (much less sixty) was probably excessive for the crime committed, although it’s clear she committed it.

Hope she doesn’t work to earn the female Zimmerman crown now that she’s free to roam the earth with serial bad decisions and a love for TV coverage.

Good, I can hardly wait till she kills someone!

Ah, the Daily Fail. One of the few publications in the world that makes the National Enquirer look like the New York Times.

(I think the Mail is just trolling him.)

This sentence really caught my eye:
“Zimmerman never sought immunity under Stand Your Ground, instead relying on a standard self-defense law.”
I have NEVER read an American news outlet (unless you count this blog) acknowledge this. Of course, they earlier made the usual references to SYG “made infamous by the Zimmerman trial”, and tried to portray the Alexander case as SYG.

Man the “journalist” that wrote that article should be glad they can’t be prosecuted for journalistic malfeasance.

“It remains unknown, of course, whether these destructive behaviors will continue in the future.”

Well we learned in psychiatric training that the best predictor of future behavior is past behavior, so I am thinking we will probably hear from this lady again in the near to mid future.

This is good news. Even better news is California has decided not to press charges against Tom Greer 80 yrs old who shot and killed lying criminal Andrea Miller. Instead her fellow criminal boyfriend Gus Adams is being charged with her death. Some took issue to Greer shooting the fleeing skank criminal. I didn’t. She had it coming. If she didn’t want to be shot,her and her vile criminal boyfriend shouldn’t have been criminals. Neither should they have attacked an 80 yrs old man.

Yea, I remember this on, man it has been a while.

Here is a link to a story about Mr. Greer not being charged.

Frankly, I am amazed that he isn’t being charged, this one was kind of iffy since he perused them.

Here’s a much more detailed story about the Greer case, including what took place after Miller was shot, and the charges against Adams AND his mother, which is new news to me:

Dang, I didn’t realize that Mom helped them rob and beat the guy. Its Felonious Family Time.

The Greer case is a profound aberration. The next 100 times this fact pattern occurs in CA, the shooter will be prosecuted. And convicted.

I’ll bet a night’s worth of Guinness on it.

To put it another way, there is NOTHING about the Greer killings that even vaguely resembles self-defense.

I can certainly understand folks who believe there ought to be a moral and legal basis for doing what Greer did. An argument for that position can be made.

But whatever you end up with, it’s STILL not self-defense.

No, it wasn’t self-defense, and most are cool with that. I certainly am. This old guy had been robbed twice before and suspected these two in those robberies. Regardless of that possibility, though, taking down at least one of these scumbag cowards is a good thing. Thou shalt not beat up old people.

Considering Greer’s age, that he’d just been severely beaten, and was most certainly shaking like a leaf, it was pretty decent shooting.

Oooo. Lookee what I found MoM using the case as an argument against mimum sentencing. Sadly he gets a lot of the facts wrong.

I must say that I am bothered by minimum sentencing laws but I also remember the reason why they were enacted in the first place.

Mouse I didn’t even make it past the first paragraph.

“In 2010, Marissa Alexander discharged a firearm in the direction of her estranged husband, Rico Gray — a so-called “warning shot” that missed him by several inches.”

Ok, isn’t “discharging a firearm in the direction of” anyone called shooting at them?

If you are shooting at them then how can it be a “warning shot”? Especially, when it only missed him by “several inches”. Now I am no Advanced marksman, but I know that I shoot better than at least 85% of folks, because I practice, and I wouldn’t try to get that close to someone’s head.

The next sentence is what really got me though.

“Their two children were present.”

Yea, standing right next to dad in the line of fire.

OMG further down in the article they say what Alexander did was “Imperfect Self Defense”, I can’t keep reading, I can feel my IQ dropping.

The Greer thing is just inconceivable.
It seems that public opinion sways the decision to prosecute far more than it should… in both directions.

Agreed, especially if the prosecutor is elected. I am betting that his age was a major factor as well and there may been unknown factors, like illness and what not.