Surprise stabbings of Jews are a growing terror trend. 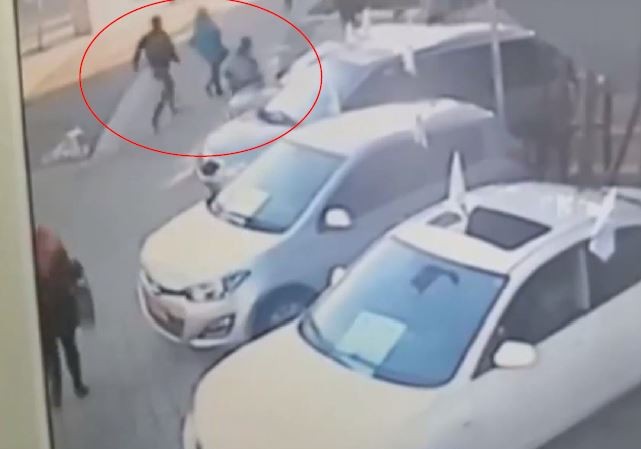 We are seeing a growing volume of knife attacks on Jews in Israel as the new Palestinian terror tactic.

The murder of four Jews praying in a synagogue in Jerusalem with knives and machetes received a lot of attention, but there are almost daily knife attacks on Jews, primarily but not exclusively in Jerusalem.

That terror tactic is necessitated, in part, by Israel’s security barrier, checkpoints and raids which make it much more difficult to infiltrate weapons and explosives into Israel for use in terror attacks.

But knives are more readily available, and knife attacks seem to be promoted as a tactic.

Hamas-affliated Palestinian students at Al Quds University produced a video celebrating the murder of the four Jews in Synagogue:

Hamas even produced a video on how to stab a Jew:

The latest incident took place in Tel Aviv, when a Palestinian started stabbing people on a commuter bus. The Times of Israel reports:

Eight people were still in hospital on Wednesday morning, hours after a Palestinian man stabbed commuters on a Tel Aviv bus and passersby in the street during rush hour, including three who were left in serious condition

The attacker was identified as Hamza Matrouk, 23, a Palestinian from the West Bank city of Tulkarem. He was shot after a short chase, during which he continued to stab people on the street, and taken into police custody. Matrouk was in Israel illegally. In an initial interrogation, Matrouk claimed that the terror attack was motivated by the Israel-Hamas war last summer, and recent tensions surrounding the Temple Mount.

A video uploaded to the internet shortly after the attack appears to show part of Wednesday’s stabbing. A number of people can be seen fleeing down the street when, from the left side of the screen, the attacker can be discerned racing after a woman in a blue jacket, whom he stabs in the back before running off down the street.

And so did Hamas:

“A morning of resistance, a morning for the nation,” wrote Hamas spokesman Fawzi Barhoum on his Facebook page, above a photo of a black-handled combat knife lying on the pavement encircled by police tape.

Gaza-based Hamas official Husam Badran praised the act on Facebook as “extraordinary” and called for more “acts of resistance” either by individuals or groups.

Izzat al-Rishq, a member of Hamas’s political bureau based in Qatar, called the attack “heroic and brave,” adding that it is “the natural response to the crimes of the occupation and its terror against our people.”

Is this The Knife Intifada?

It is about time that every Israeli with IDF service (other than those dishonorably discharged) as well as anyone else who passes a background check, be urged/required to carry firearms. There is no way the police or military can stop these knife attacks and the usual result is deaths and casualties being certain for the assailant plus a low chance of escape. As we have seen in the US, concealed carry reduces the murder rate, and the results would likely be the same in Israel

I don’t get it. Why isn’t every Jew in Israel armed? My God! If ever there was a country that needs all of its citizens to be packing it is Israel. I am not familiar with their laws but this is a no brainer. Every parent who goes out with their children should be armed. The cowardly muslims who think it is glorious to kill women and children should be stopped by the victims on the spot.

Izzat al-Rishq believes that attacking unarmed women on a bus is “heroic and brave”? Facing an equally armed, or even a better armed opponent is brave; this is simply random violence against the defenseless. Izzat al-Rishq thus self-labels as a contemptible coward who is unworthy of continued breath.

Islam seems to produce an overabundance of these fools and poltroons, which does not speak well for their culture and soi disant religion.

This is exactly why these slime should be denied access to the criminal justice system. Since their own people consider them to be heroes/warriors, when they survive apprehension they should be treated as enemy combatants.

They could rent space at Gitmo since our idiot-in-chief doesn’t want to use it.

It sounds like a “knockout game”. I’m surprised it was reported.

Unfortunately, Israelis have no 2nd Amendment. In spite of the fact that all individuals have the natural right of self defense, the Knesset has decided that this doesn’t include firearms in the hands of most citizens.

Israel limits gun ownership to security workers, people who transport valuables or explosives, residents of the West Bank, and hunters. People who don’t fall into one of those categories cannot obtain a firearm permit. Moreover, Israel rejects 40 percent of firearm permit applicants, the highest rejection rate in the Western world. Both Switzerland and Israel require yearly (or more frequent) permit renewals to insure that the reasons are still applicable.

And if they put up with being defenseless when these vermin are trying to kill them, they are just about the same as American Jews who are leftists even though most leftists hate Jews (or at least think Palestine is a real country).

Maybe they have some weird psychology going on.