New Viral Palestinian Video: How To Stab a Jew

New Viral Palestinian Video: How To Stab a Jew 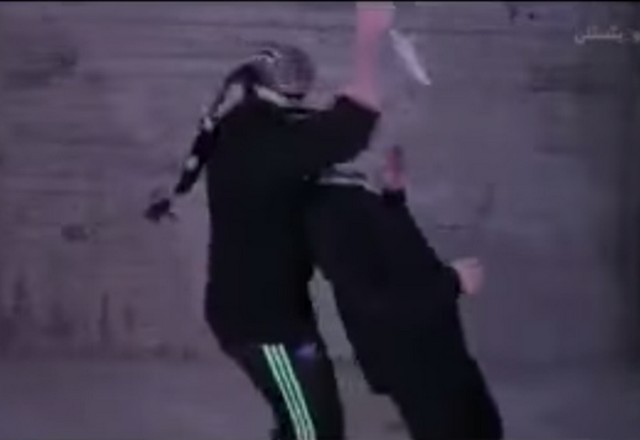 A new Hamas “How To” video is going viral in Palestinian social media circles. It isn’t how to rebuild buildings. Or how to make peace with Israel. It’s how to stab Jews. How do it properly and inflict maximum damage on the victim and increase the likelihood of killing him or her.

The “resisters of occupation in the occupied West Bank and Jerusalem” are spreading on Arab social media a frightening video demonstrating tactics on how to stab a Jew to death quickly and efficiently.

The 1-minute and 13-second video, as seen below, shows the “teacher” calmly walking up to a “victim,” stabbing him, and walking away.

One of the tactics appears to imitate the Islamic State of Iraq and Syria (ISIS) method of beheading.

The guide to killing Jews teaches that after stabbing the victim, the knife should be twisted to maximize wounds and cause death.

The story was originally reported yesterday on the Hebrew NRG website, which observed that a number terror organizations, especially Hamas, have published videos glorifying terror. Over the summer there was a “How to dress up as a Jew to carry out suicide bombings” video. In a similar vein, more recently there were was a social media campaign encouraging an “automobile intifada,” glorifying a popular method of terror a few weeks ago.

On Friday two Israeli soldiers were stabbed in the Old City of Jerusalem. It is unclear if the attacker was in any way inspired by the video.

It’s an important reminder of the role that incitement plays in terror against Israel. It comes at a time that the blame-Israel-first crowd, exemplified by Peter Beinart last week, claim that there’s no such thing as incitement, just justified anger at Israel.

There is talk about increasing the number of Israelis who are permitted to carry firearms. That won’t much help the person being stabbed, but the armed bystanders will be able to shoot the stabber. There should be no wounding of suspects. Down him and blow his brains out. That way he won’t be released in some future prisoner exchange. Israel should keep a herd of pigs specifically to devour the bodies of such terrorists. Pigs will eat human corpses. Feed the dead terrorist to those pigs. According to muslim lore, this would keep the person from going to heaven. That takes all the incentive out of stabbing a Jew. They should also collect the pigs’ droppings for a couple of weeks after this ever so haram meal And smear it all over his home. It will contain his digested body. His family will have to abandoned the place to observe islamic beliefs, making it easier for the government to destroy the home which is current practice.

I’m sorry, but no. We need to get them alive, so we can find out who is behind it. I am increasingly wondering what the exact difference is between the PLO and Hamas, and why we (Israel) aren’t bombing Ramallah.

Still, we don’t take chances with terrorists. Most of them do not, in fact, survive the encounter.

But intentionally killing people because we are too damned European to have a death penalty (as non-decadent countries such as the US have) is cowardly and barbaric. And, at the present time, we don’t.

I wish we were following the British Mandate practice of destroying the houses of the terrorists. Unfortunately, Bibi seems to have chickened out in one case, and our insane Supreme Court has stayed another.

someone should ask Jahn Karry how this helps with the Peace Process™. Does he support it, or does he have some helpful suggestions

The answer would be just a whinny with a long face.

We could hope Kerry will agree to be a stand-in for the dummy being stabbed.

This IS the peace process. This is what it is supposed to accomplish, only on a larger scale.

Another so-called “Arab Spring”. Stay away from offensive videos and men offering you rectal retribution.

I forgot to mention that most of us know that Obama and Kerry are Dumb and Dumber personified. They love to kiss the fannies of the mohammedans for some unknown reason, maybe because the mad dog mohammedans have read the koran about which hand to use to wipe their fannies after going potty.

I’m not sure if you all are aware of the recent incident where a pair of brave Palestinian heroes (one a minor, or as the new media puts it, a “child”) intentionally threw a Molotov cocktail directly at an 11-year old girl, injuring her severely. One “militant” slowed a car down, and the other threw the firebomb specifically at the 11-year old passenger.

But this is not new. Let us recall the heroic sniper who killed a baby in a stroller at a playground, during the heroic “Second Intifada”.

But not to worry. None of the victims were human. They were “settlers”.