Nothing and no one is safe 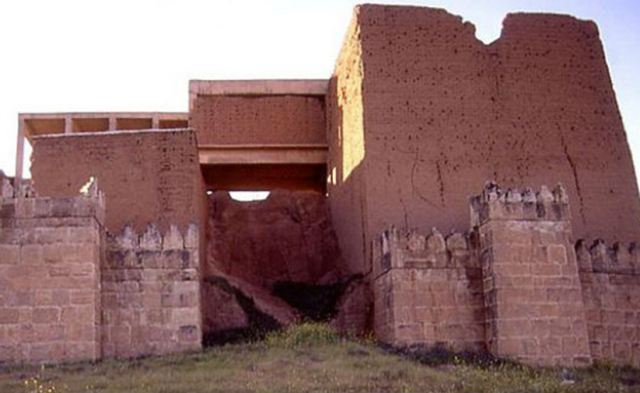 ISIS sure has been busy recently, between the prisoner swapping and executions.

However, it looks like some of their members had some time for sightseeing. Sadly, they took some high explosives with them.

Nineveh (IraqiNews.com) A Kurdish official revealed on Tuesday evening that the ISIS organization had bombed large parts and tracts of the ancient Nineveh wall, indicating that such an act violates the right of human culture and heritage.

The media official of the Kurdistan Democratic Party (KDP) in Mosul, Saed Mimousine said in an interview for IraqiNews.com, “ISIS militants blew up today large parts and expanses of the archaeological wall of Nineveh in al-Tahrir neighborhood,” explaining that, “The terrorist group used explosives in the process of destroying the archaeological fence.”

Mimousine added, “The Wall of Nineveh is one of the most distinctive archaeological monuments in Iraq and the Middle East,” adding that, “The fence dates back to the Assyrian civilization.”

Mimousine stressed that, “Bombing the archaeological monuments by ISIS is a flagrant violation of the right of human culture, civilization and heritage,” calling the international community to “take a stand to curb the destruction of historic monuments.”

Frankly, for ISIS, the violation of human rights is more of a feature instead of a bug in its operating system. For example, the group also destroyed the Tomb of Jonah. And Nineveh, one of the oldest and greatest cities in antiquity, is an Iraqi treasure. But, I digress.

I recently noted that Egypt’s cultural treasures were now safe from the country’s Islamic extremists. However, its citizens are a target for ISIS.

The terror group’s Egyptian affiliate has executed a police officer, killing him as brutally as all the rest who have died at its hands.

ISIS’ Egyptian affiliate, Ansar Beit al-Maqdis, claimed in a video released Monday the killing of a police officer whose body was found almost two weeks ago.

Egyptian troops found the body of Ayman al-Desouky, who had been kidnapped from near the town of Rafah on the border with the Gaza Strip, during a search operation in North Sinai on January 13.

In the video released on its Twitter account, Ansar Beit al-Maqdis (Partisans of Jerusalem) said its militants abducted Desouky and later executed him.

The footage shows gunmen dragging a policeman out of a car at a checkpoint manned by militants wielding machineguns and rocket-propelled grenades.

It then shows a militant shooting the blindfolded and handcuffed officer in the head three times.

I am sure glad ISIS is a “JV Team”. I sure would hate to think what chaos would exist in this region if it was actually a professional organization.

Words mean things. ISIS is not a legitimate state, therefore they didn’t execute anyone. They have murdered quite a few, including the police officer.

Interesting that what the ravages of time have left intact, the jihadists have reduced to rubble in the name of their “religion of peace”.

It isn’t enough to try to force submission on the living. They are driven to make history submit.

Wouldn’t it be ironic if their reign of destruction accidentally unearthed some ancient document that contradicted all the bloodthirsty verses of the Quran?

God is not mocked. Nor is He the petty, vengeful tyrant depicted in the modern version of the Quran. And sooner or later, this truth will be revealed in a way that even the most violent Muslims can’t deny it.

And Chris Kyle was a racist for referring to these people as “savages.” Lord have mercy on us; we’ve lost our collective minds.

In the First Covenant (Old Testament), Jonah was sent to preach to Ninevah about its collective sinful condition. He declined the assignment so Almighty God sent His special fish operative after Jonah to convince him to accept the mission. Jonah saw the light (so to speak) and preached to Ninevah.

The entire city repented and changed its ways, which brought them under God’s zone of protection.

If the First Covenant was still operative, ISIS members involved in this shameful act of disrespecting a symbol of God’s mercy would likely be struck down and killed already. However, we are now in the Second Covenant, which is the Age of Grace. So they get to skate until Judgment Day but make no mistake – this offense against God will be neither forgotten nor lightly glossed over.

Oh yeah, I almost forgot – they violated the Koran also. So whatever excuse they think they have is non-existent. They will pay with their eternity.

To quote John Creasy (Denzel Washington) in Man on Fire:

Forgiveness is between them and God. It’s my job to arrange the meeting.

Age of Grace notwithstanding, let’s hope that meeting comes sooner rather than later, for the sake of everyone else in that region (assuming, of course, that we can’t just make it come sooner).

Not sure how this violates the Koran. In Egypt, Muslims I knew often considered the rich historical remnants of ancient Egypt all around them of no interest. For them, these were relics of a pagan culture not worth knowing about. History began for them with the Hijrah.

Muzzie nihilists gotta blow things up and murder innocents. It’s what they do to advance their “religion,” don’cha know.