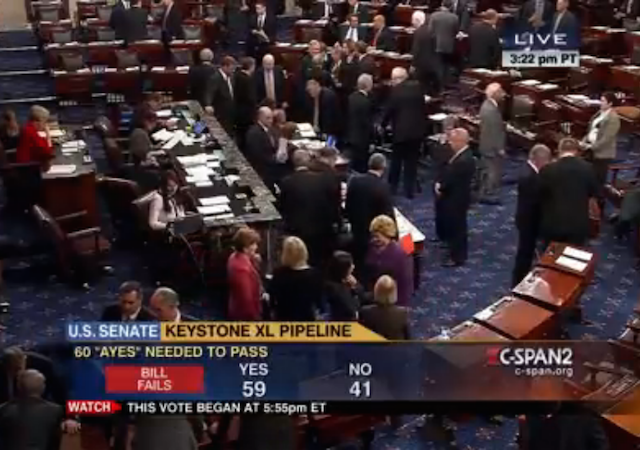 Last time the Keystone XL Pipeline showed up on our radar, it was when embattled former Louisiana Senator Mary Landrieu (D-efeated) attempted to use her support of the authorization bill to boost her spiraling poll numbers.

That vote died at the hands of a single Democrat vote held hostage by former Senate Majority Whip Dick Durbin (D-IL), Landrieu lost the election, and Republicans left Washington ready to bide their time and pass Keystone with their incoming thin-but-comfortable majority.

This time around, though, Republicans aren’t just working to move a bill that by all accounts should pass the Senate without a second thought. On Thursday, the Senate Energy and Natural Resources Committee will hold a vote on legislation approving the pipeline; the bill is expected to move out of committee without much trouble, but this time around, Senate leadership is aiming not only for 60 votes, but for enough support to override a future Presidential veto.

The first few weeks of the new Congress won’t focus exclusively on energy, but instead on a series of issues Republicans are confident they can move through Congress and send to the President’s desk.

The goal, quite simply, is to begin passing bills that will clear both the House and the Senate and end up on President Barack Obama’s desk. Almost all of the bills Republicans will put on the floor passed the House last Congress, when Democrats held the majority in the Senate.

The agenda was described by leadership aides who were not authorized to discuss the plan on the record.

The GOP is also trying to get ahead of another legislative crisis. In Congress’ second week in session — the week of Jan. 12 — House Republicans will seek to pass a bill to fund the Department of Homeland Security, which runs out of money Feb. 28. Speaker John Boehner (R-Ohio) and House Majority Leader Kevin McCarthy (R-Calif.) are working with Senate leaders to craft a package that also includes reforms to the nation’s immigration laws. One strategy under consideration is to include a border security package in the funding bill. That could set up a major confrontation with Obama.

A confrontation is inevitable no matter what road leadership decides to take. Now that Obama has lost his majority—along with the unconditional support of key actors within the party—there is no incentive for him to get along with Congress. He may be able to whip out his pen and veto anything Mitch McConnell sends his way, but now it’s Republicans who will set the agenda and Republicans who have the ability to set the tone for the next two years.

The initial Keystone vote got bipartisan support; other key issues are sure to see the same party line breakdown. This strategy offers us a key opportunity to turn the tables on Democrats and control the narrative. Even if the mainstream media complains about Republicans “not working with Obama,” we’ll have a list of legislation with bipartisan support that Obama can either choose to sign, or reject in favor of partisan bickering.

Wisdom dictates that the Republicans should pass legislation that is short, simple, sweet, and bullet proof.

Get some vetoes and get them overridden.

If the Keystone bill does that, it would be awesome.

More importantly, if President Obama tries to veto Keystone and the jobs that come along with it he will probably put the nail in the coffin as far as Democrat presidential aspirations for the next cycle. Republicans certainly won’t let voters forget the “Party of No Jobs”.

This reeks of Institutional Republican Maskirova and Taqqiya. They will pass the Keystone pipeline bill. It will get vetoed, and the veto will stand. And the passage will be the one vote of this Congress that the Institutionals will point to and say they tried.

Obama will claim, successfully, that the delay in the budget is endangering National Security [i.e. spying on and harassing Americans who oppose Obama] and the Institutionals will back down. There will be no border security package passed. We have seen this show before. Another hill not worth fighting on.

Immigration “reform” will next come up in Comprehensive Immigration Reform Bill the Institutional Republicans admitted a week ago they were working on. It bears a striking resemblance to the Democrats’ Gang of 8 bill that died. It will have a border security package that will be stripped out [according to what they were saying last week] to avoid a veto. Obama gets what he wants, delivered by the Institutional Republicans.

he’s taking credit for lower gas and energy prices against all the policies he’s implemented to hurt them. Let him veto the XL and override his lying ass