This is the price of Truth 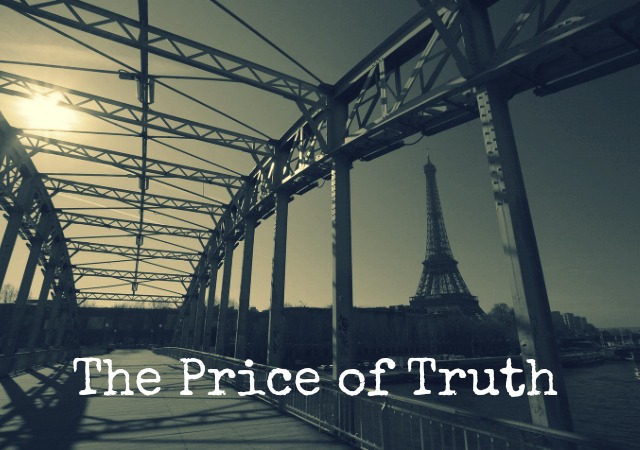 Working in the political sphere has provided a sort of quasi-emotional inoculation. For the most part, I’m able to read and write about all kind of stories, tragedies, atrocities, and hypocrisies without having much more reaction than, “Seriously? You’ve got to be kidding me!” before moving on the next le sigh-worthy moment.

I imagine doctors have a similar arrangement. It’s not that they don’t care, but as a matter of practicality they cannot become emotionally entangled with every single patient without risking professional burnout.

But then there are stories, tragedies, atrocities, and hypocrisies too powerful for the inoculation. The destruction of Charlie Hebdo is one of those.

I’m not yet able to comprehend that a group of Muslim terrorists exterminated an entire newspaper. In the most literal sense, the terrorists won. The goal was to destroy Charlie Hebdo for printing “offensive” images of Muhammad; and that’s exactly what they did. Mission accomplished.

Charlie Hebdo was firebombed in 2011 for printing comics portraying Muhammad in an unflattering light. Undeterred, publisher Stephane Charbonnier said, “I’d rather die on my feet than live on my knees.” The man is a hero, as was everyone who worked with him.

Countless pieces will be penned on the Charlie Hebdo tragedy. Some will discuss the Islamification of Europe, others will talk about terrorist cells, many will dive into the foreign policy nitty gritty, and most all will be relevant.

My reaction, my takeaway is far less didactic.

My hope is that in their bravery, we find resolve. And in that resolve, we awake to a fresh realization that freedom is never free. Should the day ever arrive, are we willing to pay the price Truth too often requires?

I was stunned yesterday when my sweetheart suggested I remove and anti-jihadist bumpersticker from my truck because it could make us a target.

(It is still there.)

Kemberlee, the Islamic Supremacists have only won if no one steps in to take over from Charlie Hebdo. If others step in the fill that void it will be a net loss for those who are offended by our entire belief system and way of life. The simple fact that cartoonists around the world are responding as they are, ridiculing the terrorists, is a good start.

It isn’t just Islam that threatens our norms of speech. All across the Anglo-sphere, repressive PC speech codes are coming on to crush expression.

Perhaps no one has detailed this encroachment better than Mark Steyn…or done more to fight it personally.

We can support him and others like him in a very tangible way. He needs people to buy his books, which are excellent values in any case.

Hell, I might buy a subscription to Charlie Hebdo my own sef. I’ll have to learn some French… Maybe not a bad thing, in the main…

Let’s hope that subscriptions to Charlie Hebdo remain on the market. Given that its top ranks were obliterated yesterday, some doubt applies. Who would step forward to fill their shoes? Certainly not any ‘journalists’ from the American MSM. Nor any of Obama’s tut-tutting PR staff, nor any wielders of the ‘hate speech’ club.

And can anyone imagine the gains which will be made by the anti-immigrant parties of Europe at the next elections? That continent must now face an existential crisis and make some serious decisions. Of handwringing by the current national ‘leaders’ and media elites, we’ve seen nothing yet.

Of handwringing by the current national ‘leaders’ and media elites, we’ve seen nothing yet.

But on NPR this afternoon, a gentleman with a French accent was interviewed. And sure enough, when asked about gains by anti-immigrant parties, his brain leaped to focus on the speeches by national ‘leaders’, all instructing the populace on avoiding any backlash or active measures of resistance.

Not a word from the ‘instructees’, the ordinary citizens who will wield the votes next election.

While I support the right of anyone to publish provocative political cartoons, Charlie Hebdo is just a liberal rag. Thus, I recommend you save your money.

Interestingly, but predictably, this slaughter has obviously not impressed upon the Western liberal-progressive elites that they are in the upper tier of Islamism’s hit list. As long as lib-progs stand in the way of effectively battling Islamism, I prefer, if any must be, that they and their institutions and cities be on the receiving end of Islamist evil attentions.

The European “Free Press” let Charlie Hebdo hang out to dry by not republishing the Mohammed Cartoons from Denmark. Several German Newspapers have rectified that omission today but the vast majority of Euoropean Newspapers have appeased the Muslims by submitting to their censorship. Until the British, European & Americam MSM act as if they are a free press then the Muslims will have won. Our culture will have lost. We cannot have one-way multiculturalism.

“I would rather die on my feet than live on my knees”. What an epitaph.

BTW this post is NOT Islamophobic, it stands for Western Cultural Values. If Islam wishes to stand in our way then tough.

You have precisely described political correctness. The works and goals of Islamic deathworkers are just a subset of it.

There were 940 cars burned this New Years around Paris, down about 10% from last year. Some areas are “no go zones” for police. They’ve essentially yielded a beachhead to Muslim terrorists, right next to Paris. If they just gave them their own state, it would relieve France of having to subsidize the Islamic invaders. But they would need walls around it.

Hopefully this company regroups and offers online subscriptions, while they are in the news. They could become the tip of the spear for the French reclaiming their country, and garner international support and alliances.

There’s a great interview on youtube by Douglas Murray about how all those media organizations “standing with Charlie Hebdo” are liars and hypocrites because they still bow down to Islamic censorship and won’t publish the cartoons.

Ms. Keye, you have made my Quote of the Day list.