Outlook not so rosy 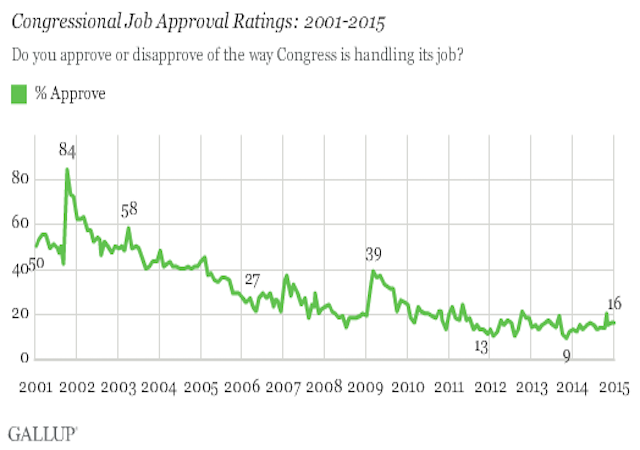 The 113th Congress was famously divided—and famously unpopular. It ended 2014 with its approval rating bottomed out at 16%. A new poll conducted by Gallup at the very start of the 114th Congress shows that not much has changed: only 16% of Americans approve of the job Congress is doing, and a sky-high 76% of Americans disapprove of a body that has been at work for less than a month.

This, of course, says less about faith in individual members, and more about how Americans feel in general about the way Washington has played politics over the past few years. The average American finds no enjoyment or catharsis in ugly floor fights and media battles, and the poll numbers reflect this disconnect between the glass-walled terrarium that is Washington politics, and the rest of the country.

Still, data from previous sessions shows that this Congress still has an opportunity to redeem itself with its skeptical electorate.

Congress’ poor track record notwithstanding, there is reason to believe this Congress will at least be rated more popularly going forward than the last two divided Congresses. Typically, elections that hand control of Congress to one party provide an initial uptick in support for the new Congress. For instance, when Democrats took control of both houses in 2007, that Congress began its tenure with a job approval rating 14 percentage points higher than the previous Congress. Likewise, after the historic 1994 midterm elections put Republicans in charge of both houses for the first time in 40 years, Congress began its work with a 10-point bump in its approval rating.

Even in 2011, when Republicans assumed control of the House but not the Senate — Congress temporarily saw its approval spike by seven points.

Only in 2003 did a new partisan makeup of Congress not translate into higher approval; interestingly, then, as now, Republicans won the Senate in the previous election and retained their House majority to earn the right to govern Capitol Hill exclusively. A crucial difference, though, is the 2003-2005 Congress began its tenure with a 49% approval rating — above the historical norm, and well above where the 114th Congress currently stands.

The 114th Congress hasn’t had time to settle in yet—and neither have the American people. The past two years have given us a history of infighting not only between parties, but between members of a GOP caucus filled with both seasoned leaders and ambitious newcomers.

If you take a random sampling of 800 adults, as Gallup did, you’ll probably find that not all of them are as involved in politics as the average blogger or activist. Maybe less than half. But most people, involved or not, can identify an unhappy family when they see one, and that’s not a situation they either approve of, or want to be a part of.

The members of the 114th Congress can salvage their collective reputation, and their approval rating, but it’s going to take a lot more than simply winning an election to get that ball rolling.

Boner & Mitch the Bit*h have already proven it’s business as usual, what with passing the omnibus bill before the recess, and the FNGs falling all over themselves in a rush to re-elect Boner as speaker sent a loud & clear message that they don’t give a 5hit what the base wants, they just want their turn at the trough.

near as i can tell, there are only 25 honest Representatives in the House, and the rest are simply whores, available to the highest bidder and/or the lowest common denominator.

a pox on them all.

Part of this is due to the usual alliance of the “conservative” press with the liberal press. They both have a stake in seeing that the current Congress is seen as a failure. You will notice that the conservative media was hammering the new Congress before it even had a chance to be seated. One method they used was in misrepresenting CRomnibus. CRomnibus was the second year of the Ryan/Murray budget compromise that both House and Senate agreed to by law. Of course, that fact was carefully hidden by both right and left but for different reasons. The liberal media wanted to get another “spin” cycle out of a year-old news story. The “conservative” media wanted to use it to bash Republicans with.

Amy Miller, the new Congress was sworn in on January 6th. The Gallup Poll you refer to was taken over the 5th to the 8th.

So at the least, people had had (-1) days to judge this new Congress; at most, a day and a half.

I get that you’re eager to cast aspersions on conservatives, but don’t you think declaring them a failure either before they were even sworn in, or at most after fewer than 2 days of sitting, is a little premature?

However, I could easily see a dip due to Boehner’s election. Hopefully, he doesn’t do what all of us pissed off about it think he’s going to do.

“The members of the 114th Congress can salvage their collective reputation, and their approval rating, but it’s going to take a lot more than simply winning an election to get that ball rolling.”

Congresses never go above 40-45% approval and that’s rare. The two party system guarantees 50/50 at best. Given the high reelection rates, voters generally seem to dislike congress as a whole, but like their respective reps and senators. Anyway, congress approval ratings swing generally from 10-25%. I’m not sure it means a whole lot.

“Congress is like two drunks arguing the bar bill on the Titanic.”

As well they should be. Everyone on the Left will HATE them simply because they are Republicans. Most everyone on the Right will have contempt for them because we know that they simply pass Obama’s agenda (as they did with the CROmnibus) while posturing as if they are opposed to what they just funded (as they currently are with the bill to fund the DHS – voting to defund that which they just funded).

They must really think we’re stupid. That we can’t tell the difference between passing the Democrats agenda, and having that become law, and voting for a Conservative bill in the House that has zero chance of ever becoming law. That poll above shows that we’re at least a bit smarter than they think.

Of course a Liberal poll taker would say that….not surprised.