Getting the facts straight 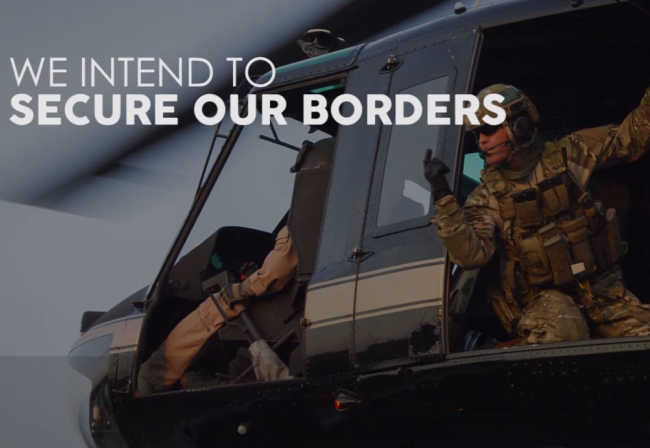 Congress now under Republican control is working on immigration reforms one bill at a time. Their latest endeavor is the Secure Our Borders First Act.

Some reports indicate the bill actually removes border fencing. We reached out to Chairman McCaul’s office who indicated reports of fence removal were, “simply wrong.” Further, we read the bill and also found no indication of fence removal.

So what does the border security bill do about fencing?

The bill does not require the building of a wall or fence along the entirety of America’s southern border. Rather, it mixed security measures depending on the location. The southern border (for the purposes of implementing security) have been divvied up into multiple sectors. Security in each sector vary depending on severity of threat and include areal surveillance, tower watch, manned patrols, and other tactics. The bill requires regular assessment of each sector in order to shift tactics as needed.

According to the House Homeland Security Committee, “Career Border Patrol agents are not clamoring for large quantities of fence. They need surveillance tools, and advanced sensors, and access roads – which is what the bill provides, in addition to placing fencing where it makes sense.”

The Secure Our Borders First Bill addresses CBP concerns by providing fencing to complete the 700 miles currently required under law. Additionally, it provides:

Thanks to the Democrats intervention, the 700 miles of border fencing originally required in the Secure Fence Act of 2006 has been delayed until now. After the Democrats gained control of Congress, the act was modified giving the Department of Homeland security Secretary an out in the form of waiver authority.

The modification stated, “nothing in this paragraph shall require the Secretary of Homeland Security to install fencing, physical barriers, roads, lighting, cameras, and sensors in a particular location along an international border of the United States, if the Secretary determines that the use or placement of such resources is not the most appropriate means to achieve and maintain operational control over the international border at such location.”

So, the fence was never finished and has been neglected these past 9 years.

To ensure a similar situation is not replicated, Chairman McCaul included stringent deadlines and penalties in the latest border security effort. DHS failure to complete and enforce the provisions set forth in the Secure Our Borders First Act, triggers penalties.

I wrote of a similar approach in June: disassociating border security from the broader discussion of immigration reform. For the sake of full disclosure; I’m quite thrilled to see Congress is doing just that.

Sorry, I have memories of “the virtual fence” as promised by Bush and the well of good intentions has run dry. I also remember listening to a congressman appearing on the Rush Limbaugh show (I think it was the 2006 act described here) assuring all that since the funds where appropriated and the language of the law explicitly stated that the funds must be spent building the fence that the fence would in fact be built. 9 years later, it is not built.

So, we have another bill and more details and more promises, none I can take at face value.

Daniel Horowitz of Conservative Review gives a good rundown of the bills flaws at https://www.conservativereview.com/commentary/2015/01/mccaul-border-bill-a-trojan-horse-for-amnesty

What would I bother listening to?

1. A stand alone “John McCain ‘build the dang fence’ Act of 2015′.
2. Operation Wetback II
3. End H1B visas until every American is employed.
4. End all immigration until all Americans are employed.

The idea of putting a fence all along our southern border is counterproductive. It will have the opposite of the desired result. It will results in greater porosity of the border, by putting infrastructure and small towns along its entire length, where there is currently very unforgiving territory.

To build that fence, we will have to put in roads and construction sites along the entire border, where right now we have empty desert. There must be provision and housing for workers while it is being built, not to mention for when we have maintenance crews and patrols. There will soon be roads and water, and people to provide them. There will be crossings.

Once the roads are in place, disappearance after crossing the border will be easy.

In the US, building infrastructure, particularly roads, nearly always results in a proliferation of commerce and towns. With more population, there will be more and easier ways to cross the border.

The land itself is hard to cross: put up a fence, and the construction work to do so will result in a very expensive work project to make the border easier to cross.

I take it you have never worked a construction site on a long stretch of road–you know, putting up a ‘fence’ in the form of a barrier along the side? After the port-potties are removed and the construction crews move on, there ain’t nothing there but fence.

Just look at all those condominiums and shopping malls that sprung up along the Alaskan pipeline!

Israel’s fence did work at keeping out the jihadists.The fence did not turn into Mecca for them.

There are thousands of miles of very good roads (much harder to build than a fence) all over the most scarcely populated areas of Texas.

I can’t think of a single town built because…road crew.

Hey! I demand all these cities and towns present themselves along I-10 headed to New Orleans. Why did I have to drive 30 miles between gas stations?

Splitting up the “required” “security” into defined segments almost seems to allow fed. government noncompliance to be even easier.

Easier to shift around the non-responsibility and non-accountability. Eh?

Might as well give $10 billion to a committee of 14-year-olds with the explicit instructions of “whatever …”.

You mean like the Army, Navy, and Air Force assign sectors to sub-commanders under a unified command?

There’s plenty to pick at without getting silly.

The bill does nothing to stop people from being cwught or tuning themselves in and claiming asylum and being releases into the country. Further the punishments for non complianc3 should hit not just dhs but departments democrats actually care about like epa.

Jake Tapper lied to congress; what is his punishment?

Louis Lerner is in contempt of congress and is now receiving a government pension. What is her punishment?

Holder is in contempt of congress. What is his punishment?

And they wonder why we don’t trust them!

It’s simple: If they don’t build what they were mandated to build 9 years ago and what they already have the money for, why should we trust any of the other promises?

Follow the law already on the books and THEN we’ll discuss new ones.

Remove the access to jobs, housing, education and gov provided bennies and and many will not be able to stay.

GOP border security bills are the same as Dem bills in that they basically are arguments over what options to get on a car they have no intention of buying.

Bills need to be results oriented, not process oriented.

Man, that is one good analogy!!

It’s why our country is in such a mess. Theater is easier than actual governance.