Radical Islamists to West: We have right to come to your countries and “kill you if you make us mad.” 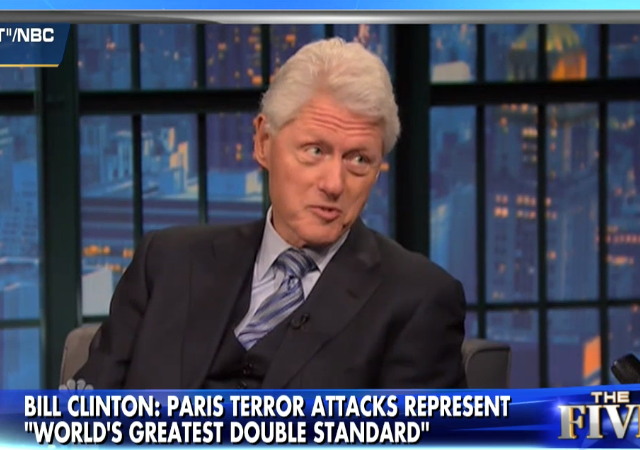 President Bill Clinton appeared on the Seth Meyers show last week and offered some common sense about the double standard of Islamic radicals who take advantage of freedom in western countries.

Clinton’s view is distinctly different than what we’ve heard from the Obama administration which is having trouble even naming America’s enemies.

Greg Gutfeld and the panel of The Five analyzed Clinton’s comments on the air yesterday:

Naturally, liberal news outlets are ignoring that part of Clinton’s appearance, instead choosing to focus on another segment.

Dylan Stableford of Yahoo News seems almost giddy about this:

Seth Meyers thought he was being clever on Wednesday night by asking Bill Clinton if he might be living in a different house in 2016 — like, say, a white one.

“I want to get away from politics for a minute and talk about real estate,” Meyers told Clinton on his NBC late-night show. “Do you think you will be living in a different house in 2016?”

“I hope not,” the former president replied. “Because 2016 is the election year, and I don’t have anyplace to move.”

While Hillary Clinton has not announced a decision about her possible 2016 presidential bid, if she were to run — and win — she and Bill would not move into the White House until she’s inaugurated — in 2017.

Clinton was asked about their first granddaughter, Charlotte, who was born in September.

“Like every other grandfather, I think my granddaughter’s the greatest thing since sliced bread,” Clinton told Meyers.

Buried way down at the bottom of the article, we get this.

Clinton also addressed the recent attacks in Paris carried out by gunmen with ties to Islamic extremism.

“Muslim leaders have to do more to combat the extremists,” Clinton said. “But I don’t think you can blame the religion. These people are politicians, guerrillas, stone-cold killers. They’re just throwing the religion out [there] to try to lure more and more converts in and legitimizing cold-blooded murder.”

What Clinton fails to mention is that the murderous death cult is able to use islam – as opposed to say, Christianity or Buddhism – to recruit violent, evil people to do violent, evil deeds is because islam’s texts, traditions, and many of its clerics condone such acts in the name of islam.

It is not some coincidence, as Obama pretends and Clinton pretends not to know.

With most religions, when fanatics twist them into condoning murder and mayhem in their name, it requires twisting them beyond recognition or similarity to their accepted practices and doctrines. With islam, it just takes citing passages from the texts or thirteen centuries of tradition.

I think the best description I have read of islam is one that I actually ran across just a few moments ago.

“A radical islamist is one that wants to cut your head off or kill you.

A moderate islamist is one that wants a radical islamist to cut your head off or kill you.”

End of story. There is no peace in “the religion of peace”.

The Pope had a John Wayne- John Ford moment. In the days the Pope was growing up, there was a concept of “fighting words”.

“When you call me that, SMILE!”

I am sure that the Pope would have backed tracked if it were pointed out that in most Western countries you would be subject to arrest for assault for giving a big mouth a fat lip.

Of course, this never applied to the John Wayne persona:
https://www.youtube.com/watch?v=o3343LUHNb4

How do you not blame the religion when absolutely everything the terrorists are doing is specifically commanded by Islam?

It’s easy when you’re either a liar or an idiot. Besides, if I recall correctly the Clintons received a boatload of Middle Eastern money for their library and charities.

WHY are we running stories about a debauched human trafficker? I don’t care what he said. What he did with grown women was bad enough, now we know that he engaged with the human trafficker/donor. WE WILL NEVER STOP TRAFFICING in humans until we call out/punish,prosecute, etc. the EXTREMELY RICH who sponsor it. The least we can do is not mention their names or see their faces in polite company.