“There are people out there who want to kill other people in the name of a variety of causes.” 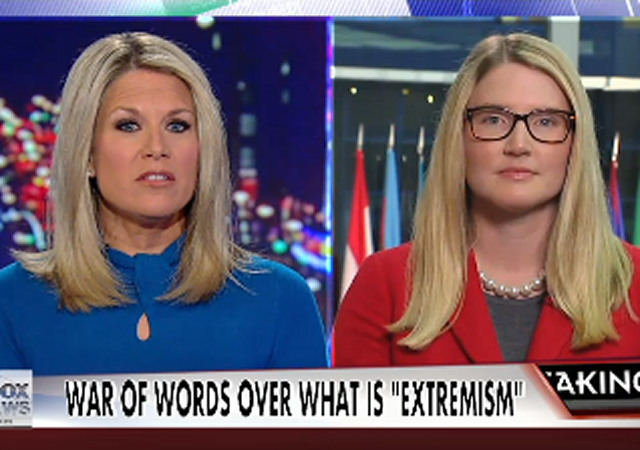 Following the terror attacks in Paris by Islamic radicals, the Obama administration is preparing for a summit on “extremism” which is leaving many people wondering one thing. Who are they talking about?

The White House will convene a summit next month on ways the U.S. and other governments can counter violent extremism and domestic radicalization, the Obama administration said Sunday.

State Department spokeswoman Marie Harf appeared on the Megyn Kelly show last night and was asked by guest host Martha MacCallum to name the extremists. Like everyone else in the White House, she had a hard time putting it into words.

Skip to the 1:45 mark for the beginning of their exchange:

Who are the so-called extremists? Lutherans? Moonies? The constant refusal by members of this liberal administration to name our enemies is dangerous. You can’t fight an enemy you’re too scared to name.

If you watched the video to the end, you heard Ms. Harf offer reassurances that John Kerry is traveling to France this Thursday. Somehow, that fails to bring any comfort.

THIS cartoon is brilliant! pic.twitter.com/HNpBr8NGfQ

Of course, the obvious exception is those “extremist tea party” types who leave the Washington commons cleaner than they found it after a peaceful protest and who are in the process of taking over our democracy to bring real hope and change.

People who believe in the Constitution, mostly.

Yea, lets not forget those Violent Extreme Tea Party types, those Gun Nut types, those States Rights Extremest, and those Constitutional Conservatives. We need to discuss their violence. I mean look at the slaughter they caused just by voting during the midterms.

Sorry I just couldn’t help myself.

The murderous hate that dare not speak its name.

They know who *their* enemies are, it’s just that their enemies are us, not America’s enemies.

You can really learn a lot about the Obamic regime simply from the character (HA!) of their spokes-holes.

They are uniformly devoid of sense, morality, or respect for the American people.

Their cardinal trait seems to be the ability to look a camera dead in the eye and lie to it. Very like their master.

Professor Muhammad wants the mountain to come to him. He has some lies and empty promises for his followers.

If Ms. Harf had a brain, she would take it out and play with it.

Too late for that, I just wonder what his name was before he became a woman.

Martha asked the right question, “What other forms of extremism?” but then let her off the hook by letting her side step without so much as a follow-up! She should have forced her to tell us what other forms, is this administration so unprepared that they don’t have a list at the ready? Never mind, I already know the answer!

You want the Obama administration to acknowledge that there is a problem with islamic extremism? I have the solution: ask the question to Joe Biden… it worked with the gay marriage thing, right?

I’m not sure a 20 year old example of one Radical Christian Terrorist has a whole lot of meaning in light of recent and world wide Radical Islamic Terrorism.

I’m pretty sure Nichols was a rabid anti-government terrorist and did not act from religious beliefs.

Um, you mean the person who said “science is my god.” That’s what you use as your example of a “radical Christian terrorist”? I’m sorry, but your comment is stupid.

“The Third Terrorist” by Jayna Davis details who really was behind the murders in OK City. It won’t be a surprise.

Obama has been using language this way from day one. Hijack the moment using moderate terms and re-direct the action to his own nefarious ends.

I get the same response from my liberal sister when I mention the islamic jihad against the West. She throws up the “All religions are guilty of jihad” nonsense. I guess if you go back 400 years you might be able to find such an instance but to my knowledge there hasn’t been any violent Baptist or Methodists lately. Maybe an abortion clinic murder from a lone whack job but nothing sponsored by the church. Even the inquisition of the Catholic church pales in comparison to modern islam.

These Obamabots live in La La Land with their hands firmly held over their eyes hoping that their insanity will not be noticed. Talk about denial: We are not fighting Islmamic terrorism. The emperor has no clothes.

Moral equivalence again, from the Democrats/communists that want DC control above “we the people” and federalist local authority.

So extreme is a word cautiously used against terrorists, while deceitfully used to demonize the tea party.

“I always use the word extreme,” Sen. Schumer said. “That is what the caucus instructed me to use this week.”
http://www.realclearpolitics.com/video/2011/03/29/schumer_to_fellow_dems_ive_been_instructed_to_call_gop_extreme.html

It’s all about messaging for the Dems, using “extremist” to disparage those that disagree with their open borders, weak defense, redistribution of all wealth, anti-free market, bureaucrat controlled leftist crap. Unfortunately they have moles deep in the bureaucracy to dish out punishment to freedom loving “extremists”.

When it comes to using that word “extremist”, spokespeople can’t use extreme for Muslim terrorists alone, they must include “many groups wanting to kill”, because their job is to morally equate the tea party (clinging to their guns) and terrorists.

The propagandist mind fluck on the American people is to always present themselves as the reasonable middle, surrounded by “extremists”, who are portrayed as terrorists (any that resist the supreme leader, especially the tea party).

The “Progressives” and Democrat caucus have officially taken to using the word “extremist” the same way a 4-year-old uses the term “not fair”.

Eventually, the word “extremist”, through overuse and desensitization, will cease to mean anything serious – just like “racist” and “sexist”; my knee-jerk reaction to those words these days is to roll my eyes and tune out until they say something important, if ever.

It’s the Democrats’ “War on Words”, and it will eventually come back to haunt them when the Party of Perpetual Outrage loses everything they’re outraged about.

yeah, we can roll our eyes, but polling shows “racist” and “extreme” have been effective. Most think the tea party is “extreme”.

“They” don’t care how absurd the usage is or what we think, they just keep pushing it. “Hands up don’t shoot” is pretty crazy too, yet many run with it.

We live in an Orwellian age, it would seem. I’m not sure if the nonsensical babble dies, or becomes entrenched. Obama elected twice means sanity is not dominant, at least for now.

Gee, I hope I’m on their list and they come see me.

Extremist: Anyone who disagrees with me.

If you’re a cynical, devious ideologue with principles made of soft clay and you find yourself in the White House, and it turns out a lot of people under your own tent will support efforts to counter ‘extremists’, even to the point of incarceration and death by drone, well, wouldn’t it be wise to leave your definition of ‘extremists’ as vague as you can? One never knows when it might become necessary to expand it.

They found some!!! My progressive friends on FB were so excited to post this! http://www.ifyouonlynews.com/crime/three-right-wing-extremists-charged-with-domestic-terrorism-and-fox-ignores-it/

The body count from those three guys is pretty minuscule and they’re safely in custody. But doubtless they are the main threat to Western Civ.

The comment section is totally looney tunes. These guys think Christians in uniforms and jack boots will be dragging them to church by their hair and stuff. Dang, where can I get some of the drugs they have access to?

… if only 1 percent of 1.6 billion Muslims harbor an inclination toward violent jihad, that puts Western civilization up against a force of 16 million people. Given the havoc caused by only three of them in Paris last week, or by two of them in Boston in 2013, or by ten of them in Mumbai in 2008, or by 19 of them on September 11, 2001, to cite only four on a very long list of examples, how many headlines are you willing to see written about Muslim atrocities before you concede there is a problem festering within Islam itself?

I especially like the nonsensical babble about “this administration removing more extremists from the battlefield than any other in history.”

Can’t help but wonder if they’ve included the ones that they’ve released back onto the battlefield….more than any other administration, I’ll wager.