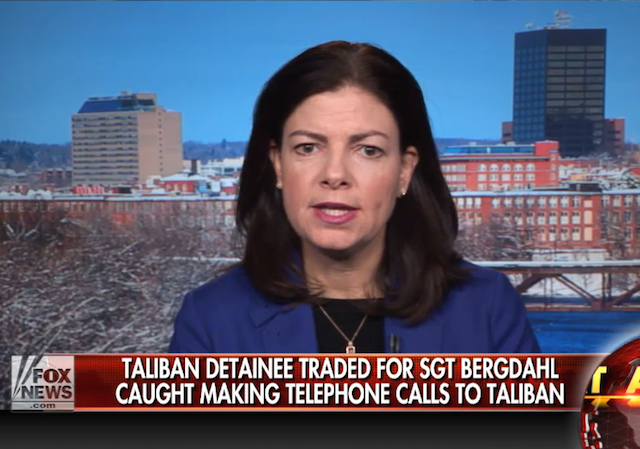 Senator Kelly Ayotte (R-NH) appeared on Fox News this week to take the White House to task over its weak stance regarding evidence that one of the five former Gitmo detainees released in exchange for Sgt. Bowe Bergdahl has been in contact with Taliban operatives.

But Sen. Kelly Ayotte, R-N.H., in an interview with Fox News, raised concerns that the five freed fighters might indeed be planning to return to the battlefield in the coming months, particularly after strict monitoring in Qatar is over.

“What happens then?” Ayotte asked. “Never mind that they’re already attempting to re-engage and obviously making communications to do so.”

She said: “I think this was a bad deal.”

The senator pushed anew for legislation she has crafted that would suspend transfers of detainees assessed to be high- or medium-risk.

Ayotte’s criticism stems from a press conference earlier this week in which White House Press Secretary Josh Earnest attempted to explain why the White House does not consider the Taliban to be a terrorist organization.

“They do carry out tactics that are akin to terrorism. They do pursue terror attacks in an effort to try to advance their agenda,” White House Press Secretary Josh Earnest explained today, but “they have a different classification.”

Semantics aside, the Taliban is suspected in multiple attacks over just the last 48 hours that have killed more than 30 people, including a suicide bombing attack on a funeral in Afghanistan today that killed 16 and wounded 39.

Even so, the White House does not call the Afghan Taliban a terrorist organization, Earnest explained, because they are “different than an organization like al Qaeda that has a much broader global aspiration to carry out acts of violence and acts of terror against Americans and American interests all around the globe.”

I’m so glad that the White House has committed to focusing on semantics when we have 5 enemy operatives on the loose.

Senator Ayotte is right—the White House is missing the point. Earnest assures us that monitoring efforts concerning the 5 operatives have been tweaked, but I don’t think anyone in Congress—or on the ground in the Middle East—puts much stock in the judgment of an Administration that turned them loose in the first place.

It seems everyone in the O administration lives is an alternate universe. By now they are the only ones believing their lies.

But history and the majority of Americans are gonnas stick them with lots of points!

Put those points in your PowerPoint-Teleprompter-Vibrater Mr. Obama!

Jeez, everyone is still making excuses for Obama’s crew. Realize that Obama and hs crew are making excellent progress working towards his goal pf radically transforming the US.

Few people, if any other at all, have asked what Obama meant by radically transforming the US when it should be obvious now that he meant to denigrate the US and its standing in the world, plus he must have also meant to reduce our military strength to the point that we cannot truly respond to hostile acts directed towards the US.

Wake up and face the facts that the US under Obama is weaker then it ever has been, that our relations with other countries is now in tatters, if that, and our economy is not doing well at all.

Given the craven spinelessness of the GOP Congressional leadership, recovery from Obama’s acts will be difficult, not impossible, just damned hard.

So, stop this BS that: He is incompetent, he didn’t know, he wouldn’t have done it if only someone had told him, …, ad nauseam.

God Bless the US because under Obama, we’re losing what His blessing had provided to the US.

What is so amazing to me is that a dim bulb like Ayotte is just now figuring this out. Back when it first went down anyone with half of a brain knew it was a blunder based on obama’s flawed ideology. He will continue to do it unless the gutless Congress stops him too. He is dismantling the military. He is making half of the US citizens dependent on the federal gov for existence. He has wiped his a$$ with the Constitution. He has elevated a weird three percent of the US population to equal status with normal people. He has destroyed our healthcare system. He has removed any sign of a Southern border and its protection. He has turned the DoJ into a crony speed trap for whites. He has driven away all of our life long allies and kissed the a$$’s of our life long enemies. Have I left anything out? In any case he has almost singlehandedly ruined our country and this dimwit Senator is just now aware of how bad the Gitmo deal was!

“The white house is missing the point.”

You could have just stopped there, lol.

The problem is, 90% of the nation didn’t hear her.
Fox News isn’t the forum for winning hearts and minds: the streets are.