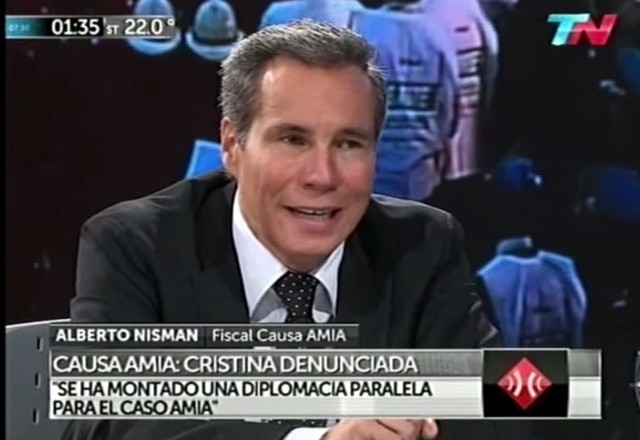 Sunday night Argentinian prosecutor Alberto Nisman was found shot to death in his apartment. Nisman had been scheduled the following day to present his criminal complaint against Argentinian President  Cristina Fernández de Kirchner before a closed session of Argentina’s congress.

The initial claim (one made by Kirchner herself on her Facebook page) that Nisman committed suicide hardly seemed credible at the time. How many people would kill themselves before the high point of their careers? Nisman had spent ten years investigating the 1994 AMIA Jewish center bombing in Buenos Aires and now he was about to charge the president and other officials of his country with conspiring to cover up the Iranian involvement in that attack. (Now Kirchner says he was killed but “suggests that Nisman was murdered on the instructions of his foreign masters in order to create a scandal damaging to her and to her government.”)

Subsequent revelations during the week have made the claim of suicide even less credible now. At Business Insider, Armin Rosen recounted some of those revelations.

The lack of an exit wound suggested the fatal shot was fired at a further distance than Nisman could have managed had the wound been self-inflicted. His last WhatsApp was a photo of stacks of documentation related to the next day’s testimony and Nisman had apparently given his maid a grocery list for the following week. A 10-person government security detail was reportedly pulled off of his apartment the night of his assassination. Most damningly, there was no gunpowder residue found on Nisman’s hands, physical evidence that he didn’t discharge a firearm prior to his death.

Fausta has more, including some gleaned from the Spanish press. Notably despite earlier claims that Nisman’s apartment was locked from the inside, there are reports that there were two other ways into his apartment that were not locked. Fausta is also right that Nisman’s murder is all about Iran. (Rosen also wrote, “no matter who’s responsible for Nisman’s death, the Iranian regime benefits.”)

Nisman’s work on the AMIA case was invaluable in documenting Iran’s efforts to build a terror infrastructure in South America. Matt Levitt, an expert on Hezbollah, who recently published a book about the Iran-backed terror organization, wrote this week, “As I was writing my book, trying to navigate the convoluted details of the AMIA bombing and other Hezbollah plots, Nisman was an invaluable resource.”

Nisman’s work wasn’t just academic though. He documented enough of his charges that Interpol issued “red notices” for seven high-ranking Iranian officials, including Ali Akbar Rafsanjani and Ali Velayati, who were Iran’s president and foreign minister respectively at the time of the AMIA bombing. (Interpol does not have the power to arrest, so a “red notice” is as close as it comes to issuing an arrest warrant) Rafsanjani, despite being implicated in an act of terrorism in another nation is often referred to as a “moderate” nowadays. He is also considered to be a mentor to Iran’s current president, also often referred to as a “moderate,” Hassan Rouhani.

Iran’s revolutionary government is lawless. The Iranian actors in these foreign terror attackes weren’t rogue operators but members of the country’s political elite. It’s something to keep in mind when the Obama administration insists that it will make a nuclear agreement with Iran that will make everyone safer and more secure.

Even assuming the P5+1 nations can come to an agreement with Iran (an agreement is hardly a foregone conclusion, Iran would probably be very happy with a series of temporary agreements that free up billions and don’t force it to dismantle any element of their nuclear program), what grounds are there to trust Iran to keep its commitments?

Remember that the crisis with Iran over its nuclear program stems from Iran’s violations of the Nuclear Non-Proliferation Treaty that it signed. Six UN Security Council resolutions – three of them unanimous – were passed imposing sanctions on Iran for its violations. Iran isn’t looking to come into compliance but to be granted absolution for its violations.

Alberto Nisman’s work exposed the danger that Iran poses to world security. Iran continues to violate international law with impunity and unfortunately there are too few Nisman’s daring to challenge Iran’s brazen misbehavior. His death will make the task of reining in Iran’s ambitions that much more difficult.

Iran is a police state that freely uses terror both internally and externally.

I’m strongly inclined to believe they were implicated…perhaps along with the corrupt Argentine regime…in this death.

I’ll leave open the possibility that this is mistaken. I just really doubt it.

I would go so far as to say you don’t need to leave it open in case you are wrong.
was thinking the other day how we seemed to have forgotten so much institutionalized knowledge gained from intel in the 80’s (from people like me) at about the time we went into iraq.
a very dangerous loss of knowledge.

I’d say it’s a good thing the Mossad knows a thing or two about operating in Argentina.

Criticizing dictators is a famous way to “commit suicide”.

“The lack of an exit wound suggested the fatal shot was fired at a further distance than Nisman could have managed had the wound been self-inflicted.”
Published reports indicate that a 22LR pistol was used. While 22LR can produce a cranial entry wound at point blank range, I can’t find any documentation suggesting 22LR should be expected to produce a cranial exit wound.

Pardon my double post, but I would be interested in seeing the autopsy report. I believe published reports indicated a wound to the temple, which from 22LR can take a long time to be fatal. The brain frontal lobe is not necessary for basic life functions. Killers who use 22LR for its ease of being suppressed must accomplish a shot [or shots] behind the ear. Nisman may not have died from the 22LR bullet.