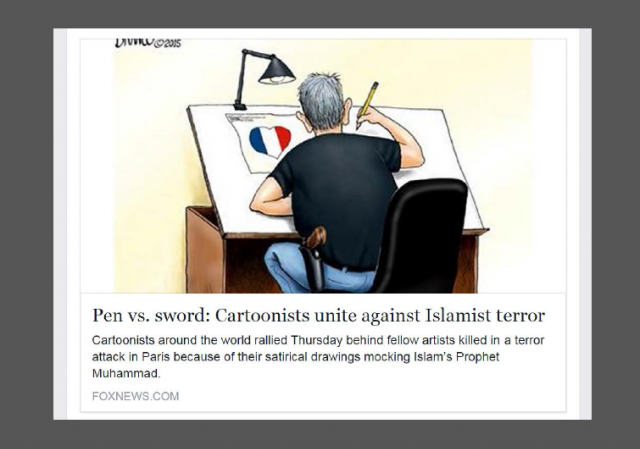 Our own A.F. Branco was highlighted in a FoxNews.com story about how cartoonists are reacting to the murders as Charlie Lebdo, Pen vs. sword: Cartoonists unite against Islamist terror:

Cartoonists around the world rallied Thursday behind fellow artists killed in a terror attack in Paris because of their satirical drawings mocking Islam’s Prophet Muhammad….

But cartoonists pointed out that Charlie Hebdo’s mission was pushing boundaries and exposing hypocrisy, and the publication ran images deemed offensive by Christians and Jews, as well.

“We all feel very badly for the cartoonists over there,” said syndicated political cartoonist Antonio Branco. “I think there’s been a climate set up in the West that has facilitated this kind of behavior – with the politically correct climate set up by our leaders. It’s time for the West to wake up to this kind of thing and stop appeasing radical Islam.”

Cartoonists, including Branco, fought back in the only way they knew, venting their emotions through their work….

Here is the link to the original Branco cartoon.

Heres another one from the FoxNews.com article, by Francis Olea: 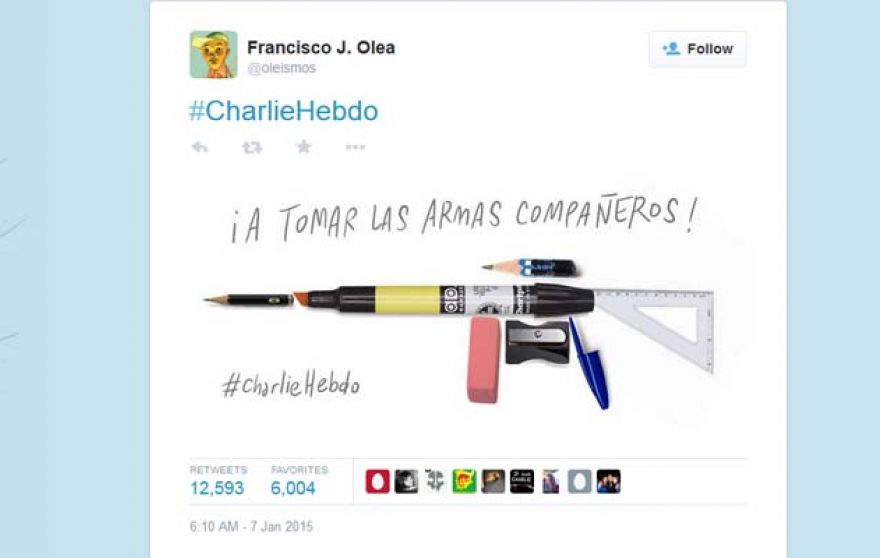 News networks claim to withhold “offensive” images out of “sensitivity”. But, why not confess: violence pays! Raw fear will keep the the Mohammad cartoons from being broadcast by the MSM.

Sensitivity would keep “Piss Christ” from being shown, but no one fears the real religion of peace.

What do you think about this headline?

He was a bigot and sociopath. The latter because he not only sought tolerance, but actually promoted the normalization of casual murder exploiting the fairy tale of spontaneous conception. He opposed traditional religion and defended the establishment of a degenerate religion. Much like the degenerate religion established in our own country by men and women who ostensibly demand a separation of church and state.

Once, is a mistake. Twice, and more, is a natural born killer.

This is why, for example, the Chinese leftist do not return calls to so-called “human rights” businesses. Despite the Chinese leftists being among the top mass murderers in history, far surpassing more popular left-wing regimes, they know that “human rights” activists have emerged as the top bigots in history. But Western men and women feel comforted by fairy tales and are mollified by the material opiate (e.g. Obamacare and “free stuff”), and the state has a compelling interest to secure taxable assets and reduce the problem set.

The Islamic terrorists want what liberal societies offer their members: pro-choice… and “free stuff”. Perhaps the irreconcilable difference is that they commit abortion in the open, rather than in the privacy of a state-sponsored/sanctioned “clinic”, and “decent” people are offended by the unsanitized display of blood and gore. The cognitive dissonance must be deafening.

If a guy with a pencil and a piece of paper can demean your religion, you might think more about the religion than the guy with the pencil.

In reading the recent articles by Muslims (and Muslim appeasers) in which they demand restrictions on free speech, I can’t help noticing the hypocrisy. They advocate criminalizing speech which “offends” or “insults” another person’s religious beliefs — but these same people routinely engage in speech that offends and insults non-Muslims’ religious beliefs.

For example, Muslims insist that Jesus Christ was not a son of God, but merely a prophet. They also say that Jesus did not rise from the dead. The divinity of Christ, and his resurrection, are fundamental tenets of Christianity — yet Muslims claim both are untrue.

Imagine the outrage if the U.S. or some other majority-Christian nation passed a “religious hate speech” law that made it a crime for anybody to say that Jesus Christ was “merely a prophet,” or to deny his divinity, or to claim he was not resurrected from the dead, on the grounds that such speech offends and insults Christians. Every Muslim in the country would then be subject to arrest and imprisonment.

I still think it would be great satire to publish comics depicting Hebdo publishing pro-choice comics in Gosnell’s little clinic of horrors, surrounded by decapitated and dismembered bodies, with clumps of cells blocking every available toilet. Hebdo would be plunging with all of his strength to flush the evidence before his “decent” patrons condemn him for exposing them to the senseless slaughter brought by their pro-choice (i.e. selective) moral principles. Obama can stand next to him, crying: will no one rid me of this burden!?

Oh, well. Hebdo was a coward, who enjoyed mocking people who were not of his church: atheist and libertine. As with other members of his church including FEMENists, and organizations including Planned Parenthood, they are offended by Islamic terrorists’ graphic depictions of premeditated abortion.

Hebdo and other pro-choicers are bigots who displace their moral cowardice, and embrace money, sex, ego, and convenience. Unfortunately, for Hebdo et al, one of their targets decided to fight back. I would have suggested a comic that exposes the bigotry of Hebdo et al. That would have been great parody.