5 Songs the French should have played for John Kerry

5 Songs the French should have played for John Kerry

All is fair in love. 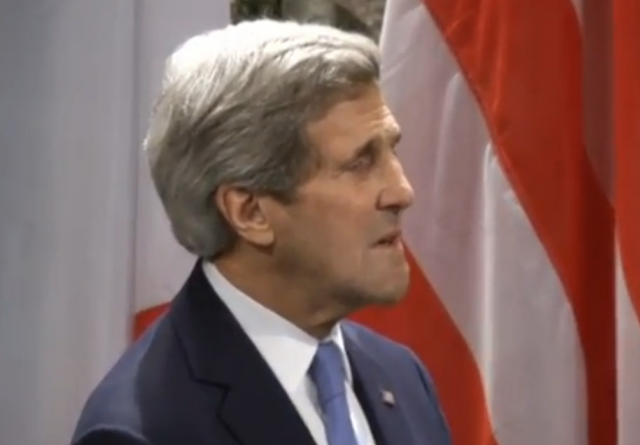 The U.S. failed to send any senior official to the Paris Solidarity Rally. Eric Holder even was in Paris at the time, but did Sunday morning talk shows.

Instead, yesterday John Kerry brought James Taylor to France to play “You’ve Got A Friend” to smooth things over. 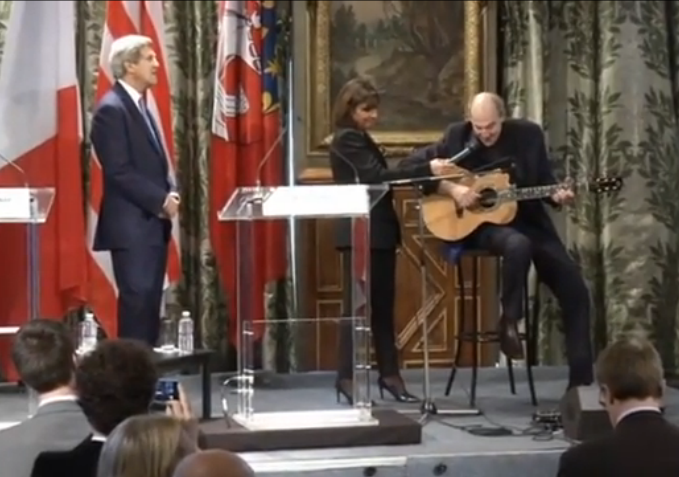 We suggested that Barry McGuire’s Eve of Destruction was a better choice.

Using James Taylor as foreign policy political cover was embarrassing for our country. But Kerry seemed oblivious to the imagery, as he went into a dreamy trance as Taylor sang. (See Featured Image)

Here are five songs the French could have, and maybe should have, played back at Kerry.

John Kerry had a near lip lock with French President Hollande (via Instapundit). 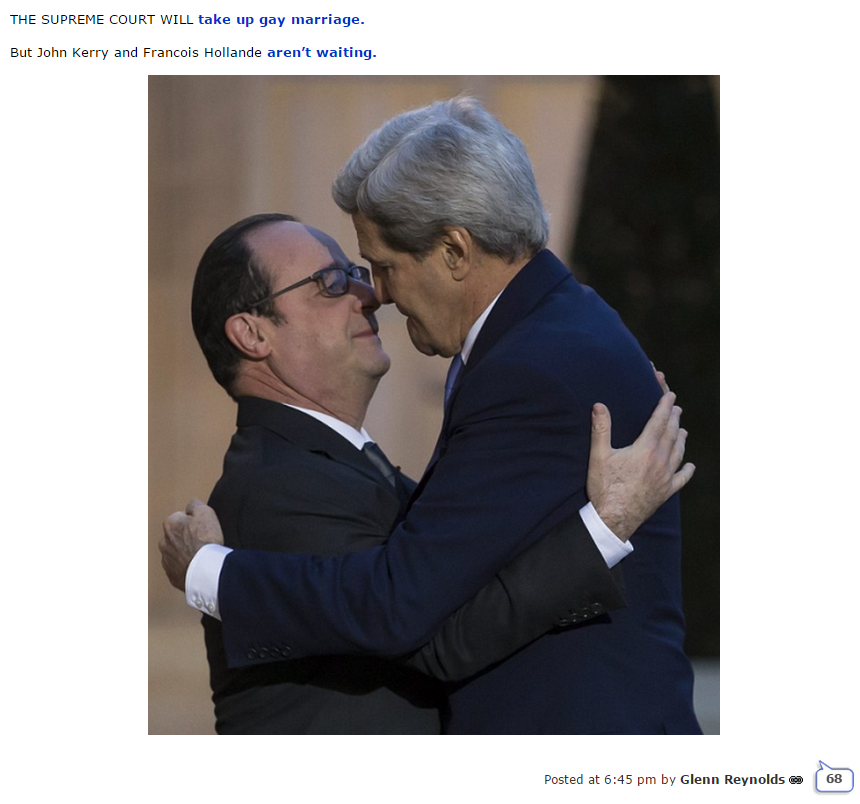 Which makes Bobby Vee – Go Away Little Girl (1962) my number one pick:

How great would it have been if the French had powered up an old Victor-Victrola and played Ray Charles’ Hit the Road Jack?

Carly Simon’s 1972 hit You’re So Vain supposedly was about Mick Jagger (though maybe not), but in 2015 it could be directed at both Kerry and Taylor. (h/t Facebook commenter)

4. Elton John – Sorry Seems To Be The Hardest Word

Many of our allies must be wondering why we no longer love them. So Elton John could have made an appearance to sing Sorry Seems To Be The Hardest Word.

This is my final, and non-humorous, entry. France is finally waking up to the fact that France is not the problem, nor is Western Civilization.  That view has not been absorbed by the Obama administration.

We previously featured Edith Piaf’s “I don’t regret a thing,” a song of defiance:

Piaf dedicated her recording of the song to the French Foreign Legion.[2] At the time of the recording, France was engaged in a military conflict, the Algerian War (1954–1962), and the 1st REP (1st Foreign Parachute Regiment) — which backed the failed 1961 putsch against president Charles de Gaulle and the civilian leadership of Algeria – adopted the song when their resistance was broken. The leadership of the Regiment was arrested and tried but the non-commissioned officers, corporals and Legionnaires were assigned to other Foreign Legion formations. They left the barracks singing the song, which has now become part of the French Foreign Legion heritage and is sung when they are on parade.

No, nothing of nothing
No! I don’t feel sorry about anything
Not the good things people have done to me
Not the bad things, it’s all the same to me.

No, nothing of nothing
No! I don’t feel sorry about anything
It’s paid for, removed, forgotten,
I’m happy of the past

Oh, what did you see, my blue eyed son?
And what did you see, my darling young one?
I saw a newborn baby with wild wolves all around it
I saw a highway of diamonds with nobody on it
I saw a black branch with blood that kept drippin’
I saw a room full of men with their hammers a-bleedin’
I saw a white ladder all covered with water
I saw ten thousand talkers whose tongues were all broken
I saw guns and sharp swords in the hands of young children
And it’s a hard, it’s a hard, it’s a hard, and it’s a hard
It’s a hard rain’s a-gonna fall.

I see a bad moon rising.
I see trouble on the way.
I see earthquakes and lightnin’.
I see those bad times today.

Don’t go around tonight,
Well it’s bound to take your life,
There’s a bad moon on the rise.

I need the bathroom on the right to barf after the Taylorization of our foreign policy.

Personally, I think “Qui a le droit” by Patrick Bruel is spot on and describes what is going on …

Who has the right to do this
To a child who truly believes
What the grownups say?
We spend our life saying thank you—
Thank you to whom? For what?
For dictating rain and good weather
For the children that they lie to

Footage emerges of what Johnny said to Frankie as he went in for the smooch:

Once, and maybe still, used at bars on Okinawa when the girls did a certain dance. Makes it very appropriate for Kerry’s performance as Secretary.

Which Side Are You On immediately comes to mind.

I’m not sure if these clowns are scabs for the Islamists or if they are akin to those deluded souls on the Animal Planet series Fatal Attractions. Those people all believe they have special insights into the true nature of some kind of wild animal. They take these un-tamable beasts into their home as pets, to entirely predictable results.

How about Fortunate Son? It fits JFKerry perfectly.

Smokey Robinson: “Tears of a Clown”

Following his rendition of “You’ve Got A Friend”, James Taylor saluted the visiting mullahs from Qom with the Ayatollah Khomeini’s favorite song, “How Sweet It Is (to be loved by ewes)”.

Barack Obama then joined John Kerry on stage for a moving duet of “I’m So Vain (I prob’ly think this song is about me)”, after which Secretary Kerry updated us on the latest talks with Teheran with a highly nuanced version of Joni Mitchell’s “(I’ve looked at Iranian mushroom clouds from) Both Sides Now”.

Mahmoud Abbas got into the spirit and serenaded the Secretary of State with the Beatles’ “Hey, Jew!”, but Mr Kerry explained that was just one great-grandfather and it was a long time ago back in the Hapsburg Empire.

Asked about excitable young men who talk about avenging the Prophet and open fire while yelling “Allahu Akbar!”, Secretary Kerry responded that he and President Hollande had disagreed on whether to call them “radical extremists” or “extremist radicals” before compromising with a performance of “A Force With No Name”.

Two decapitated heads that had been through the desert with Islamic terrori …I mean, a force with no name then entertained the crowd with a Cat Stevens medley of “The First Cut Is The Deepest” and “Another Saturday Night (and I ain’t got no body)”.

The recital was brought to an end with Secretary Kerry’s performance of the first line of Carole King’s “I Feel The Earth Move (under my feet)”, at which point ISIS blew the US Embassy sky high.

Carly Simon has stated it is definitely NOT about Jagger, Warren Beatty, or James Taylor. Over the years, she has given only the clues that the letters E, A, and R are in the name.

While at times she claimed it was a composite, she supposedly revealed the name to the winner of a charity auction some years ago, and also to Taylor Swift, although both were sworn to secrecy and haven’t given it out.

I think it is Eric Clapton. He flirted with the extravagant dress for a while in that time period, and “wife of a close friend” could refer to the fact he stole his best friend’s (George Harrison) wife.

I did not realize the GOP had pajama boys.

I still can’t hear this song without picturing Beatty. I’d rather picture him than L’Fraude. Can’t unsee that image :O

I think: “Just a Gigolo” works for John Kerry on many levels.

I think this version of a Carly Simon song best captures the mood that John Kerry was able to bring off:
https://www.youtube.com/watch?v=NyC0X1z4J0U

SEND IN THE CLOWNS

Kerry should have sung They’re Coming to Take Me Away, HA-HAA.

Please, there is only one song that needs to be listed:

“I Don’t Care About You” by the punk band Fear.

it’s less than 2 minutes long and full of F-bombs, hence no link here, but easy to find on YouTube if that’s your cuppa.