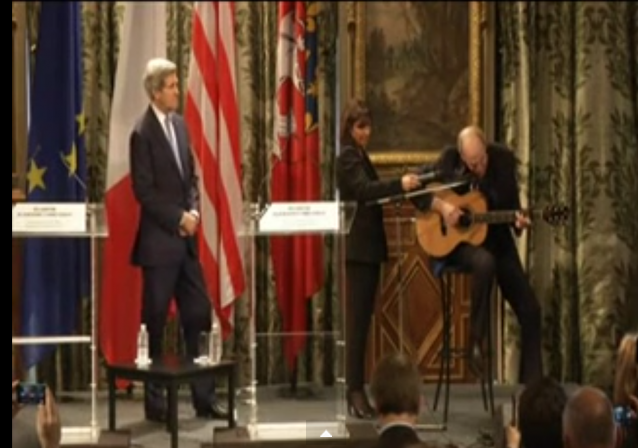 This, ladies and gentleman, is our Department of State.

Just call out their name and you know where ever they are, they’ll come running with a hashtag or cheesy publicity stunt.

After the workplace violence incident that took place at Charlie Hebdo, our response to one of our longest standing allies and friends is… James Taylor.

Taylor performed “You’ve Got a Friend” at a press conference held by Secretary Kerry in Paris:

Though we can’t help but think Barry McGuire would’ve been a more appropriate act, all things considered:

What was @JohnKerry dreaming of as James Taylor sang "You've got a friend"? http://t.co/kwlI6PXbjS pic.twitter.com/QC6eJ0Hesj

The question is, was “You’ve Got a Friend” a message for France or for the islamic terrorists?

On the subject of abject foreign policy failures by the Obami…

All out of “Reset” buttons, are they?

Ah, Barry, you were ahead of your time.

Where are the grown ups?

Maybe Barry McGuire had a premonition of the destruction coming from another Barry?

Great live video, by the way. Sung without using a teleprompter.

*egad*… that was a brutally apoplectic scene. But, I guess it could have been worse… much worse… at least craven slack-jawed rumpswab John ‘Strength & Honor’ Kerry didn’t drag Cat Stevens Yusuf Islam to France to dispassionately serenade the globally deluded Muslim terrorist apologists.

Barry’s song is now very relevant. It would have been the perfect choice considering what is going on around the world.

Oh, these Obama people are so very painfully embarrassing. Please make them stop.

Is this what they consider ‘smart diplomacy’?

See, I’d have taken Ozzie Osborn with me instead of James Taylor. If the French liked Jerry Lewis, they’d love Ozzie.

On second thought, Ozzie would fail to find the airport on time, so I’d take Ted f**king Nugent with me to share his musical views on terrorists, Muslims, guns, and freedom of speech. Then, at the end of Ted’s set, I’d bring out Chuck f**king Norris for an inspirational speech and karate demonstration on some dummies dressed as terrorists. I’d also bring a contingent of French Canadian goons from the National Hockey League to pound the joys of freedom into some skulls, if necessary. Within a week, every terrorist and wannabe in France will have self-deported, everybody in France would get drunk for a week, sleep it off, and then get back to the business of living. THAT would be my ‘reset button’.

“Rock and roll is dead,” they said. LONG LIVE ROCK.

Taylor should come back to the U.S. and serenade American, re Obama, with “You’ve Got A Fiend.”

Or maybe Al Stewart could have gone with him.

He could have sung “Constantinople.”

Here in the night, leave your homes, it’s time for running
Out of the light, I see the hosts of Mohammed coming

And that woman who kept talking during such a ‘sensitive’ performance. What was she asking for? Perhaps something to make this ‘friendship’ more meaningful? No wonder Kerry missed the big parade. He thinks it’s 1973.
How foolish – sooo lacking in sincerity.

Should have sent Mylie Cyrus. If they are going to show what asses they are, there’s nothing like a large Cyrus butt twerked in one’s face. Oh, and don’t forget the tongue…

John Kerry was a Viet Nam vet, by the way.

The most brilliant Legal Insurrection contribution of all time! Freshman year, Jesuit high school in Manhattan, we used to sing “Eve of Destruction” the night before any major exam.