Tactic: Cut off the support network and isolate the target from sympathy. 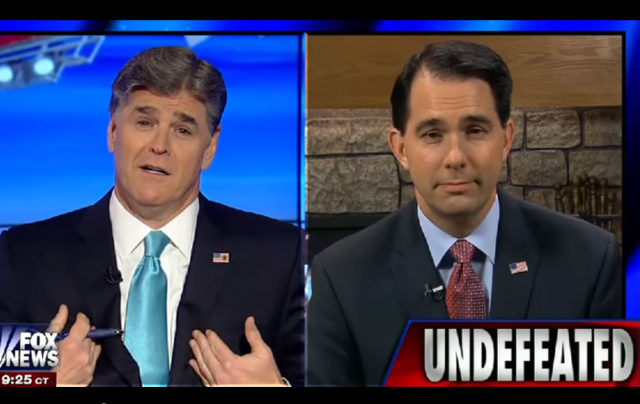 We have extensively covered the Wisconsin John Doe investigations.

The extremely abbreviated version is that Milwaukee County prosecutor John Chisholm has led two distinct investigations of conservatives in Wisconsin. John Doe No. 1 targeted Scott Walker’s term as Milwaukee County Executive. That case is over, and no wrongdoing by Walker was uncovered.

John Doe No. 2 involved allegations that a wide range of Wisconsin conservatives engaged in illegal coordination with Walker in the Recall Election, which Walker won.

John Doe No. 2 has resulted in federal and state litigation, with conservative individuals and groups asserting that the wide-ranging seizure of records violated their constitutional righs.

Currently, the probe effectively is shut down by a state court judge’s ruling refusing to issue any more search warrants, and a federal court’s decision that Wisconsin could not apply the state campaign laws so as to prohibit issue coordination.  A separate federal case on that legal point may be headed for the U.S. Supreme Court.

Now some more information, via M.D. Kittle at Wisconsin Reporter, who has been the leading reporter covering the various John Doe proceedings and cases, regarding yet another lawsuit, against the Wisconsin Government Accountability Board.

Agents for the embattled state Government Accountability Board continued a zealous campaign finance investigation into dozens of conservative groups even after judges who preside over the board voted to shut it down, according to a previously sealed brief made public Friday.

The documents, from an updated complaint filed by conservative plaintiffs in a case against the GAB, appear to support claims that the campaign finance, ethics and election law regulator is a rogue agency. They also show that the GAB considered using the state’s John Doe law to investigate key state conservatives and even national figures, including Fox News’ Sean Hannity and WTMJ Milwaukee host Charlie Sykes.

Wisconsin Reporter also obtained some of its information from previous court documents that were supposed to have been redacted.

“What we have uncovered so far shows the Government Accountability Board, or at least its staff, being anything but ‘accountable,’” said Eddie Greim, attorney for plaintiffs in a lawsuit against the GAB. “For example, the public has learned for the first time, over GAB’s objections, that GAB set up a secret system of Gmail accounts for its staffers and the prosecutors who ran the John Doe. We also know that GAB hoped its ‘illegal coordination’ theory could even extend to allow it to subpoena media figures like Charlie Sykes and Sean Hannity.”

Here is the relevant paragraph from the First Amended Complaint (via Wisconsin Reporter)(emphasis added):

75. The search warrants and subpoenas extended to targets throughout Wisconsin. In addition to the subpoenas received by Mr. O’Keefe and the Club, it has since been publicly revealed that R.J. Johnson, Kate Doner, Wisconsin Manufacturers and Commerce, Friends of Scott Walker, and Governor Scott Walker were also subjects of search warrants or subpoenas. These identities were revealed during a Federal Civil Rights Action that challenged the constitutionality of Doe proceeding. See O’Keefe, et al. v. Schmitz et al., Case No. 2:14-cv-00139 (E.D. Wis. Feb. 10, 2014). Many more warrants and subpoenas were planned for other targets throughout the country, including media figures such as Charlie Sykes and Sean Hannity. See Investigation Planning – Meeting Notes, Ex. F at 7; see also Investigation Status Update – Meeting Notes, Ex. L at 8.

Unfortunately for us, Exhibit L was filed under seal, we can’t confirm the text independently.

None of this would be surprising.  As I have noted before, the John Doe investigations identified people (primarily Scott Walker) and then searched for crimes.

That conservative media almost was targeted also is not surprising.

A cynical view would say that stifling conservative media was necessary in order to make the stifling of conservative activists complete, to isolate them from their base of support:

“Pick the target, freeze it, personalize it, and polarize it.” Cut off the support network and isolate the target from sympathy. Go after people and not institutions; people hurt faster than institutions.

A less cynical view would believe that the moon is made of cream cheese, and the tooth fairy exists.

One thing that hasn’t got much discussion is public prosecutor reform. Surely somebody has thought about remedies for prosecutorial abuse, and I don’t mean nonsense such as, “What do you call a hundred public prosecutors at the bottom of Lake Michigan?” But what serious remedies actually have been proposed? And why is there no discussion of them?

Any ideas? I’m not coming up with much other than to win elections, and then to put pressure on through traditional and new media.

I decided that instead of cursing the darkness I would google for information. I came up with this page: https://www.nacdl.org/prosecutorialmisconduct/

It seems there is a “Hyde Amendment” that could be strengthened. But I’m not sure that would help in cases like the one described here.

There is a Center for Prosecutor Integrity. On its website is a white paper, “Roadmap for Prosecutor Reform.” Must of what was in it sounded like it wouldn’t be very effective in dealing with the likes of John Chisholm. But at the end, there were these paragraphs:

The federal Civil Rights Act of 1871 created a federal cause of action for actions of civil liability committed by state officials, including prosecutors, who deprive citizens of their rights.

But in a seminal 1976 case, the Supreme Court ruled prosecutors are immune from civil suits when they act within their capacity as an “officer of the court.” Subsequent decisions expanded absolute immunity to encompass prosecutor conduct associated with presenting evidence before a grand jury and administrative functions. Absolute immunity has been upheld even when the prosecutor acted in bad faith or with malice.

States should enact a statute similar to the federal Civil Rights Act to confer only qualified immunity upon prosecutors who violate ethical requirements.

An alternative approach is for a victim of prosecutor misconduct to file a lawsuit under the theory of municipal liability. In 1978 the Supreme Court ruled that a municipal government could be held liable if the plaintiff demonstrates that a deprivation of a federal right occurred as a result of a policy of the local government’s legislative body.

Thanks for the info. I think I’ll do some investigating myself. We already give to Judicial Watch, but there is probably more we could do.

Q. What do you call a hundred public prosecutors at the bottom of Lake Michigan?

GAB set up a secret system of Gmail accounts for its staffers and the prosecutors who ran the John Doe. We also know that GAB hoped its ‘illegal coordination’ theory …

The answer used to be common law citizen grand jury. Only God knows where you could find such a creature today.

The powder keg is getting closer to blow.

As far as I am concerned the State of Wisconsin and their prosecutors can go straight to Hell! Boy am I steamed that they were trying to extend beyond their borders to attack protected speech throughout the nation.

Hey John Chisholm, I have a sprig of mistletoe hanging over my backside! So you know what you can do.

I personally would LOVE to get to deal with a search warrant served on someone like Sean Hannity!

Because the push-back would be GLORIOUS…

There is an arcane procedure to serve a material witness subpoena in another state via the federal Uniform Act which I think every state has adopted, but it always requires a local judge to declare the witness ‘material.’ It’s not for fishing expeditions, although finding a Democratic judge do it anyway might not be very hard in Milwaukee.

But serving a search warrant from a Wisconsin court in New York? That’s a new one one me.

Of course, this tells you everything you need to know about the ‘tolerant’ Left. Their objective is to silence all opposition voices. They’ll do it primarily via intimidation and as far as I can tell they’ll use just about any means – legal or illegal. Until those in positions of authority who abuse their power start going to prison, it will only get worse.

So why *aren’t* those hard leftists in positions of authority who abuse their power going to prison?

Probably because they don’t want to go to prison.

In part because we have too many lefty prosecutors and judges. Of course, having won so many offices down the chain this year we may be able to do something about that. It is also why it is critical not to elect a Democrat or a wimp to the presidency in 2016 – judicial appointments.

Dingy Harry is making sure that you don’t have to worry your purty little head about that.

RULE 12: Pick the target, freeze it, personalize it, and polarize it.” Cut off the support network and isolate the target from sympathy. Saul Alinsky

Who would have thought that behavior of some behind the Cheddar Curtain would more resemble that behind the Iron Curtain.

I think we need to start calling them “Jim Crow Prosections.”

Don’t like your political opponents? Clear the deck. Just like Obama did in his Senate run when he had sealed divorce records opened. The ends justifies the means.

When there is no consequence for abusing the law, more abuse is invited.

If the only penalty for bank robbery were to give the money back, there would be bank robbers clogging up the teller lines.

This is surprising how? Give the wrong people power without some kind of oversight and this is the result.
Check out N.Y.C. prosecutors and ambulance chasers working together to steal money from corporations. I’ll also post this in the tip line.

Much as big industries have found natural allies in Republican attorneys general to combat federal regulations, plaintiffs’ lawyers working on a contingency-fee basis have teamed up mostly with Democratic state attorneys general to file hundreds of lawsuits against businesses that make anything from pharmaceuticals to snack foods.

The lawsuits follow a pattern: Private lawyers, who scour the news media and public records looking for potential cases in which a state or its consumers have been harmed, approach attorneys general. The attorneys general hire the private firms to do the necessary work, with the understanding that the firms will front most of the cost of the investigation and the litigation. The firms take a fee, typically 20 percent, and the state takes the rest of any money won from the defendants.

“Pick the target, freeze it, personalize it, and polarize it.” Cut off the support network and isolate the target from sympathy. Go after people and not institutions; people hurt faster than institutions.”

That works both ways.