Another blockbuster akin to Citizens United on the way?

Yesterday, the 7th Circuit Court of Appeals denied a request by two targets of the Wisconsin John Doe investigation to rehear a decision by a three-judge panel to vacate an injunction issued by the District Court preventing the state investigation from continuing. (Order at bottom of post.)

The substantive issue underlying the case is whether the Wisconsin campaign regulations violated the First Amendment, specifically laws that purportedly bar “issue advocacy” coordination between campaigns and outside groups.

In the John Doe investigation, the Milwaukee County prosecutor — who allegedly has a family political bias — targeted dozens of conservative Wisconsin activists for sweeping subpoenas. Two of the targets — Eric O’Keefe and the Wisconsin Club for Growth — filed suit in federal court to halt the investigation, and for money damages. The District Court granted the injunction and allowed the case to move forward.

I reached out to one of the lawyers for the John Doe targets, Andrew Grossman, as to whether Supreme Court review via a Petition for Certiorari would be sought, and he responded as follows:

“We will be seeking Supreme Court review and have every expectation that the Seventh Circuit’s decision will be reversed.”

Plaintiffs’ claim to constitutional protection for raising funds to engage in issue advocacy coordinated with a politician’s campaign committee has not been established “beyond debate.” To the contrary, there is a lively debate among judges and academic analysts. The Supreme Court regularly decides campaign-­‐‑finance issues by closely divided votes. No opinion issued by the Supreme Court, or by any court of appeals, establishes (“clearly” or otherwise) that the First
Amendment forbids regulation of coordination between campaign committees and issue-­‐‑advocacy groups—let alone that the First Amendment forbids even an inquiry into that topic. The district court broke new ground. Its views may be vindicated, but until that day public officials enjoy the benefit of qualified immunity from liability in damages. This makes it unnecessary for us to consider whether any defendant also enjoys the benefit of absolute prosecutorial immunity, which depends on the capacities in which they may have acted at different times…..

The John Doe targets have 90 days from yesterday to file the Cert. Petition.

If the Supreme Court takes the case, this could be another blockbuster ruling, akin to Citizens United, that reshapes the landscape for political suppression of free speech in the form of campaign regulation. 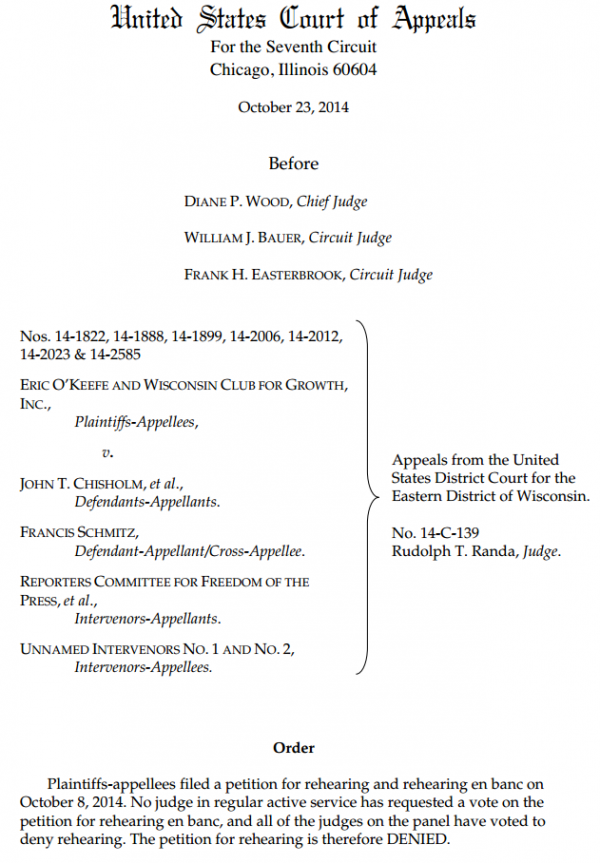 I also expect the ruling by the DC Circus dismissing the TEA party suits will be appealed.

One of the things I understood that Court to rule was that individual IRS officers shouldn’t be liable, because it would “chill” the government.

I’m in favor of chilling these thugs down to absolute zero. The government…including the courts, should be doing this. If the government won’t do it, people are going to resort to self-help measures.

“One of the things I understood that Court to rule was that individual IRS officers shouldn’t be liable, because it would “chill” the government.”

Isn’t that also the argument against the exclusionary rule?
Guess they also feel that cops who torture shouldn’t be prosecuted.

the one that says, “GOVERNMENT will ensure that its minions WILL be controlled, AND they will be punished for any abuse of power”.

When that ceases, we’ve lost the glue. I’ll fight that quite openly.

Not to get too far off in the weeds but this is a startling ruling. Fed jurisprudence is that complaints need only to provide fair notice of the nature of the claims but once the suit progresses, any claims that the evidence proves are valid even if not stated originally.

So the fact that the tea parties could not truthfully claim tax-exempt status operated to put the majority of ‘deep pocket’ donors out of reach. If that is not actual damages, I don’t know what is.

And one further point is that difficulty in determining the dollar amount of damages is not relevant to whether damages are owed.

I’m predicting SCOTUS will deny cert. A true conservative/libertarian would defer to the political process, warts and all.

This is a matter best left to the state political process in Wisconsin. Let the voters there decide, rather than unelected judges, unaccountable to the people. *Emotionally* I’d love for the John Doe “investigators” to be slapped down, but *intellectually* I don’t think it’s going to happen by the feds, if it happens. We’ll see. Just a prediction.

So, it’s your position that voters should deal with prosecutorial misconduct?

After they are voted out of office, WHERE do their victims go for vindication of their rights and damages?

How does that look outside the judicial process?

Juries are the essence of democracy. Or do you disagree with that?

My prediction is that the Court will deny cert. That’s all. When you start counting heads I doubt they can get the votes to accept.

What does or doesn’t happen in Wisconsin will happen at the ballot box and in the justice system there, criminal and civil.

It is interesting to note that the District Court Judge on this case is the Honorable Reggie B Walton. That is the same Judge Walton who tried the Scooter Libby case.

In that case Judge Walton, addressing a brief filed by six constitutional law scholars remarked, “The submission was not something I would expect from a first-year law student”

First of all, this decision is about the John Doe case in Wisconsin, not the recent district court ruling in the IRS case. Commenters need to get with the program.

Second, I look forward to reading the petition for certiorari, and hope the Supreme Court accepts review. The motion for rehearing en banc was quite persuasive, and I am a little (but only a little) surprised none of the judges voted to rehear the matter. I certainly agree that if the Supreme Court accepts review, the decision it issues could be a pretty important decision.

Liberals in this country are trying to push conservatives around in ways that edge up against, and frequently grossly exceed, the bounds of reasonableness and legality. If the Courts don’t offer effective recourse–as both the 7th Circuit decision and the recent district court IRS decision do not–it will be an extremely bad thing for this country.

Maybe I’m missing something but I’m not a lawyer and my entire knowledge of this case is based on reading posts on this site. This is a federal court decision but isn’t there also a case in state court which has been more favorable to the plaintiffs? If that is so (and as I said I could be wrong because this is only my recollection of previous posts) why is a federal decision required? Can’t the plaintiff’s continue their state action?