The Generational Battle on Campus Against Israel

The Generational Battle on Campus Against Israel

Cary Nelson, Professor Emeritus at the University of Illinois at Champaign-Urbana, is the Editor of a recent book, The Case Against the Academic Boycotts of Israel. 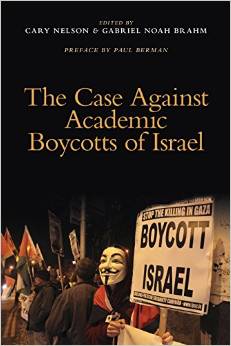 He also was interviewed on Israeli television recently.

He makes some good points, similar to those I have made in many of my speeches and appearances.

The faculty Propagandists with Ph.D’s are the main problem, they use their leverage over students in the Humanities and Social Sciences to intimidate and control the agenda.

Academic BDS is a movement led by evil people, and followed by many more uninformed, misinformed and misguided dupes.

Evil can never be ignored. BDS is a pox on academia, and should be treated as such.

I’ll use this as a chance to promote my interview with Mark Levin on the topic, in case you missed it:

We made it a point to go to the BSA Museum in Irving, TX, this last summer and attend the Israeli Scouts performance as they toured of the USA promoting friendship with Israel.

It was crowded and they made lots of friends.

We enjoyed it very much and went to Chick-Fil-A afterwards for lunch.

I made it sure to tell my boys before we arrived that the BDS crowd might get wind of it and be there to protest.

They weren’t. But we were ready for it if it did happen.

The reason I was aware of the BDS movement is this website.

Thanks Prof. Jacobson for your excellent job of reporting on the BDS movement.

I can only imagine the response of these liberal Israel hating fools if they visited Israel during a rocket or terrorist attack. Can you imagine the outrage that they were endangered by the Palestinians and that didn’t they know who they were! My God! We are on your side! We are innocent and should not be part of your war with the Israelis. It may never occur to them that most Israelis feel the same way. If they would leave Israel alone there would be no violence there.

As an aside, I try never to miss the chance to remind the morons wearing the Guy Fawkes masks that they paid a royalty to Time Warner when they bought it. TW owns the trademark, they purchased it for V for Vendetta.

On the rare occasion I run into one in person, I watch for their iPhone and the chance to mention Apple’s profits and manufacturing facilities.

Do you remind them that he was plotting to kill hundreds when he was captured and sentenced to death? That he wanted to put England back under the heel of Rome? That he was nothing but a Loser?