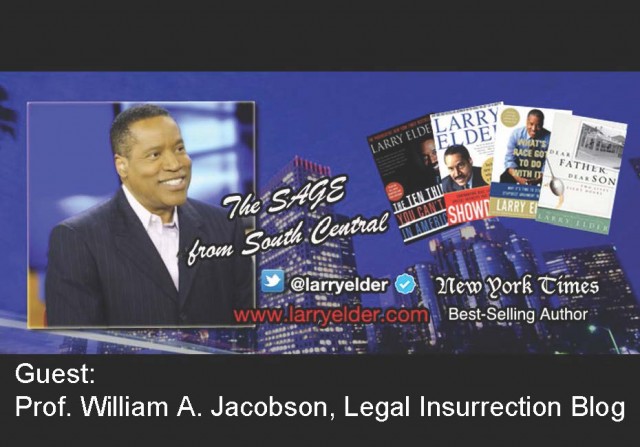 I appeared on June 19, 2014, on The Larry Elder Show, talking about the BDS movement.

Larry was very familiar with the movement, and voiced some strong opinions.

I appreciate the opportunity, thanks Larry.

UPDATE: Congratulations to Larry for getting a Star on the Walk of Fame!

For every young, American black man influenced by Larry Elder, hundreds or thousands are influenced by the likes of Al Sharpton, Kanye West, and Toure.

That is a crime.

Larry is well known in Los Angeles, but he really should be nationally famous. Like I said about Tammy Bruce recently, I think he represents the model American citizen.

Professor, you’ve really honed your message on BDS. That was a perfect distillation of its activists’ and supporters’ ulterior motives. No wasted punches. No dancing around. Put ’em flat down on the mat.

I don’t know if the BDS crowd have read the following,
http://blogs.timesofisrael.com/israels-economic-impact-on-the-us/
but if they have their way, there are going to many Americans who will suffer financially.

“He indicated that bilateral trade between the two countries is now at $40 billion annually and will probably top $45 billion for 2014.
…
To complete the story, one must understand the additional economic impact of Israeli company operations in the US, both in benefits to the local economies and the number of jobs supported.

A case in point is Massachusetts.
….
The over 200 Israeli-founded businesses located in the state booked over $6 billion of revenue there and generated nearly $12 billion in economic benefit to the state, inclusive of their own revenue, plus the multiplier effect of their spending in the local economy, for example, on office space and accounting, legal, marketing, healthcare and other services. This represented 2.9% of Massachusetts’ GDP in 2012. These companies directly employed over 6,600 people in the state and supported over 23,000 jobs based on the multiplier effect of their demand for goods and services in support of their businesses. ”

It is about time that Americans were made aware of the contributions to their health and livelihood that Sh***y little country has made.

” Thus far, no one has commissioned a study of the overall impact of Israeli business on the entire US economy. “