Rubio is winning the media war

Rubio is winning the media war

…and it has nothing to do with the policy war 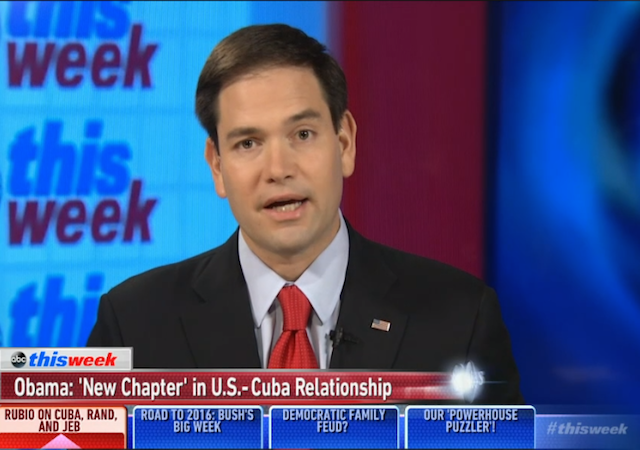 Rand Paul may have drawn first blood in the War on the War on Obama’s Cuba Policy©, but it’s Marco Rubio who is set to finish this thing with his reputation intact.

Today, Senator Marco Rubio (R-FL) appeared on ABC’s This Week and nailed fellow Republican and Senate colleague Rand Paul (R-KY) to the wall over Paul’s support for Obama’s plan to open up relations with Cuba.

“If he wants to become the chief cheerleader of Obama’s foreign policy, he certainly has a right to do that,” Rubio said on This Week. “I’ll continue to oppose the Obama foreign policy on Cuba because I know it won’t lead to freedom and liberty for the Cuban people, which is my sole interest here.”

Paul and Rubio mixed it up this week after they came out on different sides of Obama’s surprise détente with Cuba. Rubio has been the most vocal opponent of Obama’s normalization of relations with the Castro-run island country, while Paul has suggested this was tantamount to isolationism.

Host George Stephanopoulos asked Rubio he would support Paul if he became the GOP’s 2016 nominee.

Both men have made what I would characterize as “intemperate” remarks about the other’s approach to Cuba policy. The difference between the two lies in how each handled the other’s jabs. Paul took out his frustrations on Facebook and Twitter, delighting his small (but growing? we shall see) base of libertarian followers, while Rubio held back on social media. Paul has engaged the media and accused his detractors of running on emotion (which may be the most rude nugget to come out of this sausage grinder of a cycle,) but it’s Rubio who has succeeded in dovetailing his responses to Paul with explanations of why Obama’s Cuba policy is a bad call.

Paul claims that this spat has nothing to do with 2016, but I haven’t spoken to a single person who is willing to sign on to that explanation. Answering rude and/or intemperate one-offs with even more rude and intemperate commentary isn’t something you do unless you’re trying to create a media buzz around yourself.

The buzz is there, alright, but it’s not buzzing in favor of anything Rand Paul has to say.

Can you explain why you are linking to a piece from 2013 that very likely contained a typo, but which we can READ refers to another section the piece carefully does not reproduce, but could totally clarify things?

WTF is the relevance?

Okay – forget that link. Here’s more for you:

Rand Paul will never be on a national Republican ticket. You can argue about the terminology all day and all night, but his foreign policy concepts disqualify him. Period.

It is a product of the DC-centered media that first-term Senators are even considered Presidential material. Among Paul, Rubio, Cruz, and Warren, not a single one of them has ever run anything larger than their Senate staffs. None have any record of accomplishments that would qualify them for the world’s biggest job.

Stirring speeches motivate people, and that’s great. They are no substitute for actual management experience, as we found with Obama, and Kennedy and Harding before him (the other Senators who went to the White House).

When you look at the list of well-qualified successful Governors and former Governors on our potential list – Walker, Jindal, Christie, Bush, Romney, Pence, Daniels, Martinez, Snyder, and Kasich – it is silly to even think about putting up some untested rookie. Even Ehrlich, Pataki, Huckabee, and Palin are far more qualified.

Well I’ll just say, without belaboring the point, that Ted Cruz has a career in the legal profession and in government that should not be so lightly dismissed. Besides, how was Bill Clinton qualified because he was governor of a midwestern state? There’s nothing like being President except being President. It’s what you’re going to do with the job.

Not to quibble – but isn’t Arkansas really more of a southern state politically? Politically, it seems to have moved with the rest of the south from being almost completely dominated by the Democrats, to now being dominated by Republicans, as contrasted with much of the midwest which tended to be much more Republican to start with (at least in the non-urban areas). Maybe part of the Jacksonian Scotts-Irish belt that extended through the lower midwest and border states apparently as far west as Oklahoma.

Still, Clinton was a small state governor, and was probably only elected President because he was able to keep much of his past under cover, and was not well known nationally.

Wrong. Being Governor of a state of the US is good preparation and experience for a presidential candidate. It’s executive experience – which Obama never had, and hasn’t learned, and refuses to shoulder the responsibility of in his Constitutional circumventions. And a Governor’s track record gives citizens a far better handle on his suitability for office than an exclusively hosanna chorus from the media.

The disaster of his initial election was compounded by a fawning media which refused to examine the actions and influences and history which he DID own, so eager were they to elevate him as a celebrity instead of an executive.

I do hope that you are correct. Besides his strong socialist tendencies, I think that a good part of Obama’s failure as a President revolve around his complete lack of experience running any organization larger than a Senate staff before running for President. I think that it is almost criminal that he has to find out what is happening in his government on the (left wing) TV news. Dana Perrino pointed out that when she was GWB’s press secretary, they worked very hard every day to know what was going on throughout the government and the world. But, then again, Bush has a Harvard MBA, and not a Harvard JD. I think Bush’s MBA is one of the best degrees for the job, while Obama’s JD is one of the worst. (I have one of each, but not from Harvard). The joke about Harvard MBAs was that you only hired them if you wanted them to ultimately take over the company, or at least a division of it – that is what they tend to concentrate on, high level management. Even cranky John McCain III, having been groomed and trained for flag rank, was far better prepared to run our government than a former community organizer in his first term as a Senator.

You had me until you said “Christie”. What the?

Anyway, there is a certain set of personality traits that leads one to be successful as a legislator. They include a willingness to compromise, to put yourself in the other guy’s shoes.

A leader, however, has to have vision, and the strength to imprint that vision onto others, and the will to overcome opposition.

It is self-evident that these sets of characteristics don’t play well together. Governors need the latter. Senators need the former.

Our two best-known, contemporary Senator/Presidents were Obama and Kennedy. Both were led around by the foreign policy nose by hostile leaders in other countries.

Isn’t it interesting that both those Senators were elected President largely by keeping their problematic histories largely hidden from the voters?