Roaring Blaze in Los Angeles May Really Be “Man-Caused Disaster”

Roaring Blaze in Los Angeles May Really Be “Man-Caused Disaster” 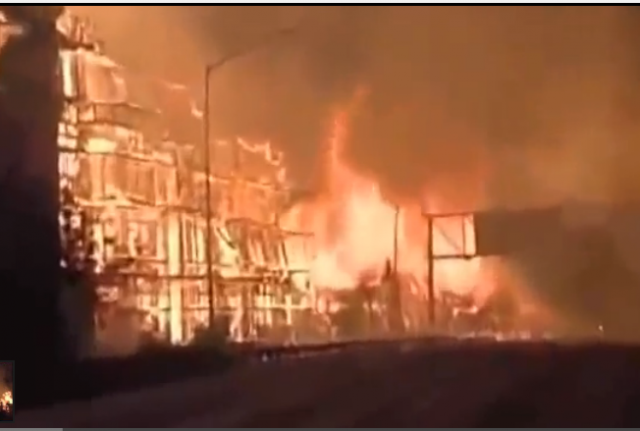 We Californians were happy to see the months of October and November pass without a significant wildfire, especially since there was an unusually early start to the fire season in May.

However, December opened up with an intense conflagration that may be a real “man-caused disaster”.

A large fire in downtown Los Angeles destroyed an apartment tower that was under construction and forced the closure of parts of two major freeways, snarling rush-hour traffic Monday morning.

Officials are inclined to believe it may have been intentionally set, The Times reports. Fires of this magnitude are treated as criminal fires.

However, Capt. James Moore said it is “very rare the whole building is engulfed.”

The apartment complex that was destroyed was the center of some controversy:

A series of dense, upscale apartment complexes have been built over the last decade around the 101-110 interchange in downtown L.A., including the under-construction DaVinci.

Developer Geoffrey Palmer’s company is known for the Orsini, the Medici and other faux-Italian apartment buildings that have risen along the four-level interchange. The complexes have been part of the revitalization of downtown, though critics have complained about the design and size of the buildings.

The building was in the news earlier this year when the developer sought a pedestrian bridge that would link the DaVinci to other complexes in the area and offer residents a route to downtown attractions.

The developer told the city that transients living under the 110 Freeway would pose a safety threat to future renters. The bridge proposal faced criticism from some in downtown, but the City Council approved it in May.

Investigators are likely checking environmental extremist groups such as Earth Liberation Front (ELF), one of the most publicized terror groups in the nation prior to September 11, 2001, for potential involvement. James F. Jarboe, Domestic Terrorism Section Chief of the Federal Bureau of Investigation notes that the most destructive practice ELF is arson.

For example, from the FBI case files comes this blaze, also set in the Los Angeles area:

Earth Liberation Front (ELF—see 1997) activists set fire to around 40 Hummers and sport utility vehicles (SUVs) at a West Covina, California, dealership. The fires cause around $2 million of damage. “Fat Lazy Americans” and “ELF” are among slogans painted on the vehicles. ELF routinely takes credit for vandalizing SUVs in dozens of other cities, and explains that the vehicles are being burned “to remove the profit motive from the killing of the natural environment.”

Of course, in today’s world, there are a wide array of other culprit possibilities.

This fire was so intense that it melted freeway signs, and caused radiant heat damage to surrounding buildings.

“When we see a fire this well developed … (we think) perhaps it was set,” LAFD Deputy Chief Joseph Castro told reporters. He noted that flammable liquids are used on construction sites for equipment.

The investigators have a hotline number — (213) 893-9850 — and urged tipsters to call in with any information relevant to this event.

Given the amount of citizen-generated video available via social media, the right tip may be able to help solve this case to determine if this was the “man-caused disaster” that is now suspected.

Makes you wonder if there is any connection to all the protesters and their chants of “burn this bitch down”, etc.

We saw the footage on the news in Australia. First thing that crossed my mind was that the fire was deliberately lit and yes now I have read this I think that ELF would be suspect in the case because of possible motivation. It is about time that they were brought to justice because of the damage already caused.

Most major construction sites are protected these days with security systems that provide video that is sent by telemetry to prevent destruction by the slime who steal and/or vandalize such projects.

We’ll see if this was one.

The first youtube video seems to have disappeared because of copyright claims. Here’s one with some great angles on the what was going on during the fire..

Arson is as serious as murder.

There is no way to know, when one sets a fire, who may be caught up in the inferno. There may be sleeping watchmen, or homeless people curled in an out of the way corner, or late workers whose lighting isn’t noticed. Firemen, police, and rescue workers are also at extreme risk, as are any number of innocent bystanders.

Because there is some pathology about setting fires, first offenders often get off with some sort of treatment, but nearly always burn again.

According to MSNBCs Melissa Hart Perry, arson isn’t violence. So party on.

Was this company in financial trouble? What sort of insurance policy did they have on this project?

In a lot of these cases, you just have to follow the money…

When the LA Times reported this, I tried to publish a comment that the #Ferguson mob could be a suspect in this. LAT refused to publish it. So I tried again with different wording still refused to print it. I didn’t state it as fact, just suggested the possibility. LAT will be the last to get us the word if one of their lefty pets caused the fire.